The big screen rom-com is making a return with the upcoming release of Ticket To Paradise, a film that will have you falling head over heels in love.

Romantic comedies used to be a Hollywood staple, with A-listers headlining box office smash hits such as Notting Hill and Hitch.

However, over the past decade there has been a drought as actors moved on from the genre, studios began focusing on bigger budget movies such as superhero flicks, Hollywood started running out of original concepts, and streaming services entered the conversation. 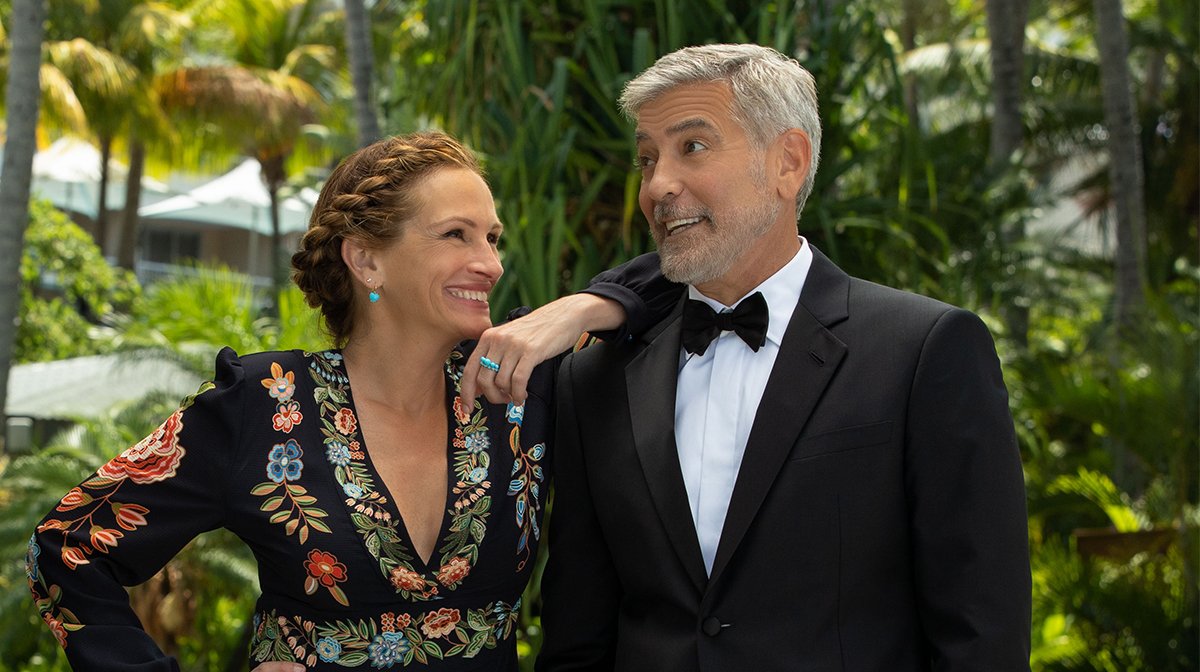 It was time big screen rom-coms had their comeback and it’s clear 2022 is their year. The brilliant Marry Me and The Lost City have already kickstarted the renaissance, but Ticket To Paradise is the key to its resurrection.

That’s because it reunites two of Hollywood’s most glamorous stars on-screen, Julia Roberts and George Clooney, for a charming love story about second chances set in beautiful Bali.

Starring as divorced exes set on a mission to prevent their daughter from marrying a man she has just met, the pair’s sizzling chemistry is simply irresistible. 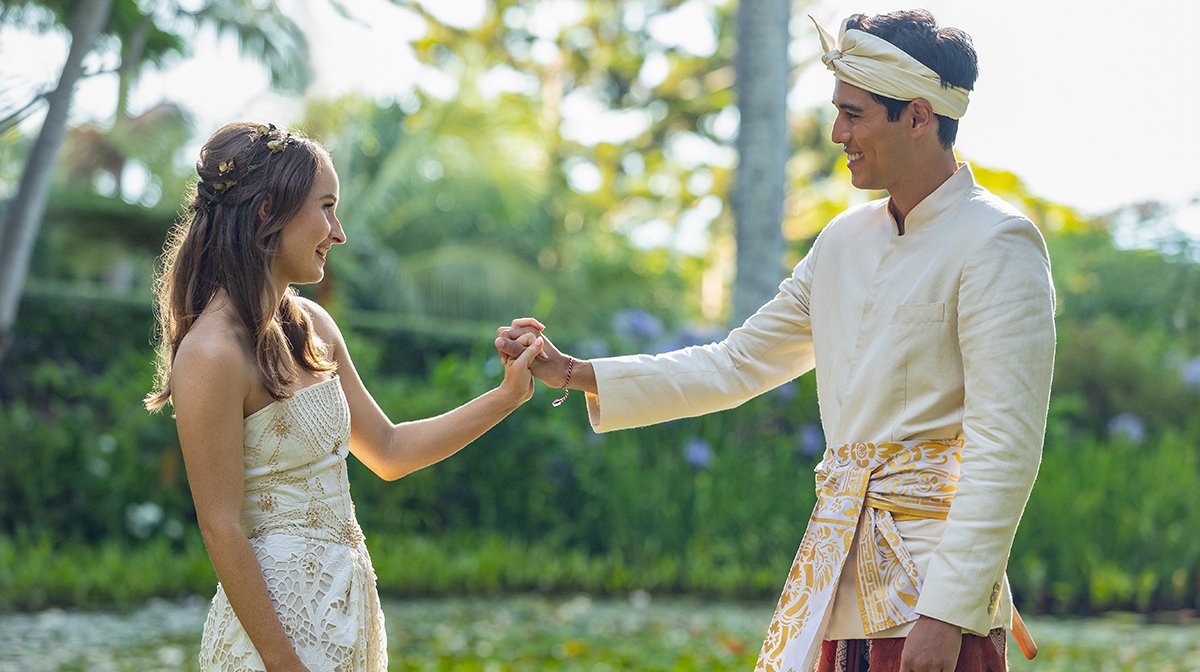 For writer/director Ol Parker, best known for bringing us another island adventure in the shape of Mamma Mia! Here We Go Again, this film wouldn’t have worked without Roberts and Clooney.

Speaking to Zavvi, the filmmaker revealed he wrote the project exclusively for them: “Julia’s character is called Georgia and George’s was originally Julius as they were named after them, but then that seemed naff, so I changed Julius to David.

“Usually you send scripts to one actor at a time, but I sent it to both of them saying ‘I’ve written these roles for you’. I was worried as if they said no I wouldn’t know what the film is any more – there was no plan B, so it was amazing to get that call.

“It was a key part of my plan to make a big screen rom-com. On set, whenever we lined up a nice shot or something, George’s favourite compliment was to say, ‘that’s old school’. There’s something so perennial and gorgeous about their stardom, I wanted to capture that.” 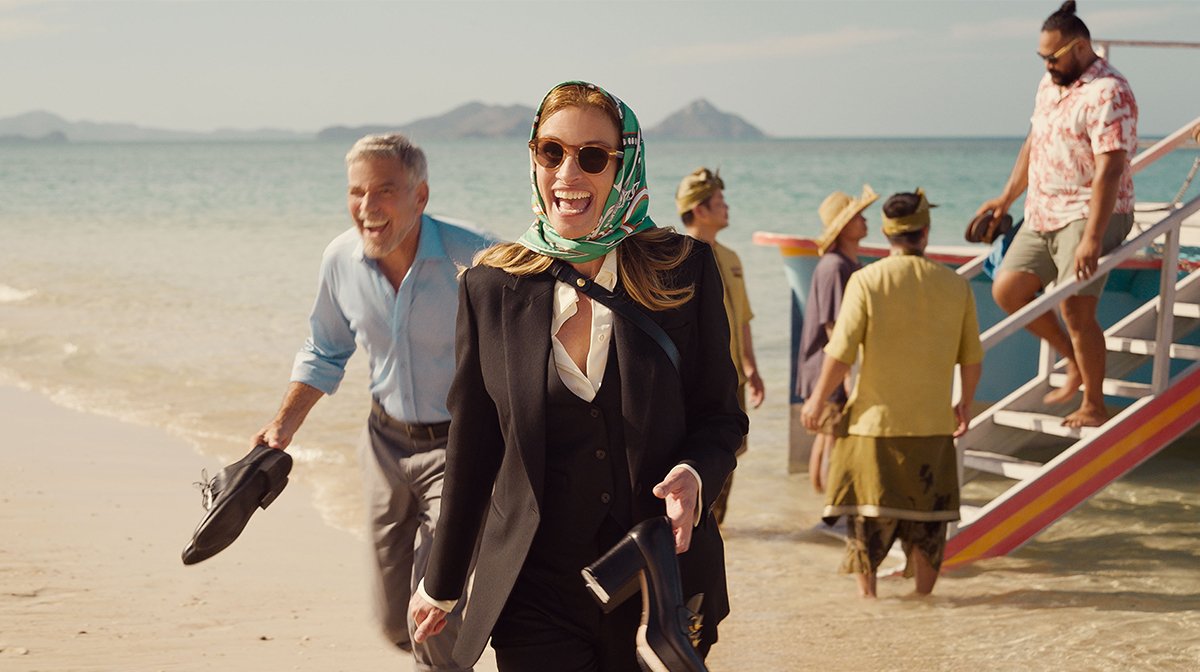 “Old school” sums up Ticket To Paradise very well as it feels like a traditional rom-com, a film that would work brilliantly as a double bill with the likes of When Harry Met Sally or Forgetting Sarah Marshall.

Emily In Paris star Lucas Bravo, who plays Georgia’s hot yet hapless love interest Paul, agrees that this is what Clooney and Roberts brought to the project:

“It’s better than you could have imagined. When you spend time with Julia you understand why she is so inspiring and successful. She wanted everyone to feel comfortable on set.

“Movie sets used to be people just having a good time and bringing that energy to the screen, but with algorithms and streaming services, that has all changed. However here, George and Julia brought that old school vibe.” 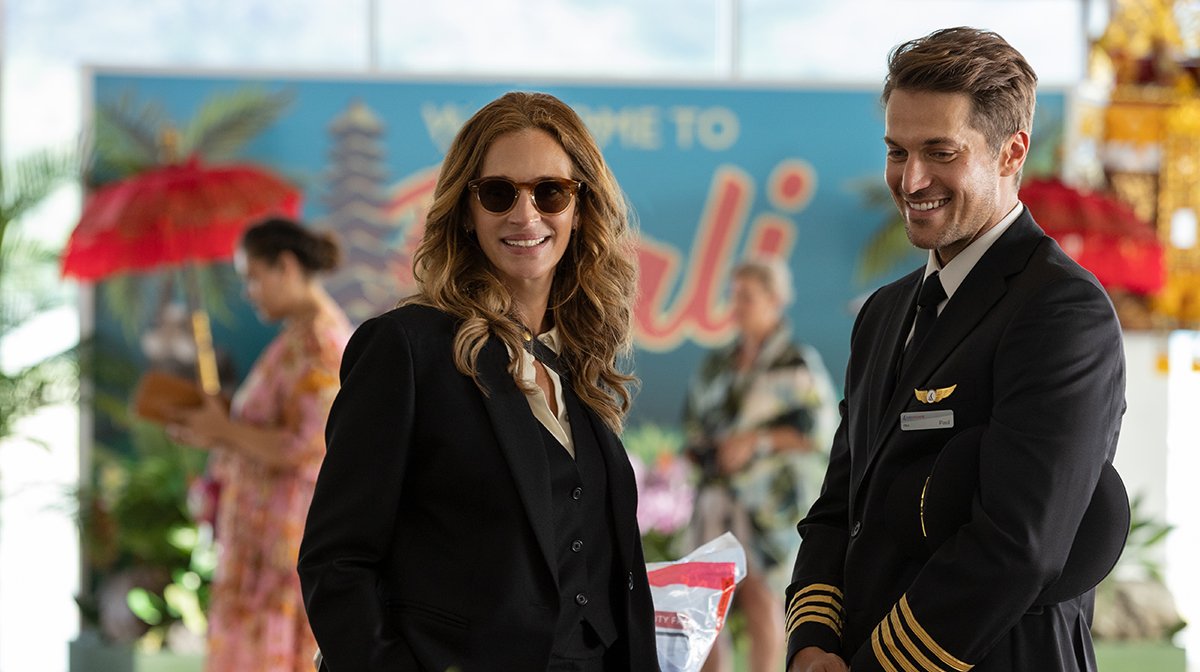 Bravo wasn’t the only actor who found the experience of working with Clooney and Roberts rewarding.

Kaitlyn Dever, who portrays their daughter Lily, told us that “it was insane being able to do scenes with them, be a sponge in that environment soaking it all up”, admitting she is still unable to process the fact they played her parents.

Meanwhile for Billie Lourd, reuniting with her Booksmart co-star Dever (“as soon as Kaitlyn got on that rum and coke on the plane it was a Booksmart reunion”) to play Lily’s chaotic friend Wren, the memories of making Ticket To Paradise are ones she is looking forward to sharing with her children. 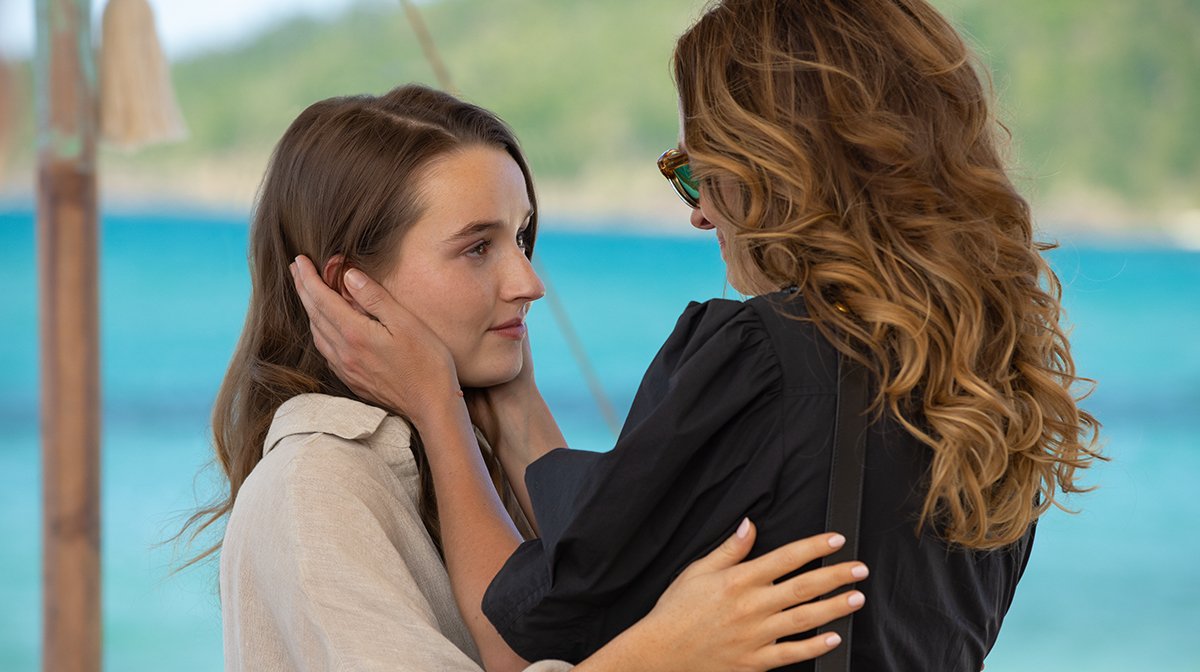 A highlight of the movie is an interaction between Wren and David in the middle of the night, a quiet moment of reflection where the latter opens up about his emotions, a rare moment of honesty for the character.

It’s a tender scene, with Lourd telling us that it is “one of my favourites from my entire career”. She continued: “It was so surreal, walking onto set knowing I’ll be sitting at a bar with George Clooney with cameras around us.

“It’s a moment you dream about, so I was nervous, but he was kind and we laughed so much. As the kids say, it’s a ‘core memory’ and something I’ll share with mine. And they’ll have to believe me – it’s on camera, there’s evidence.” 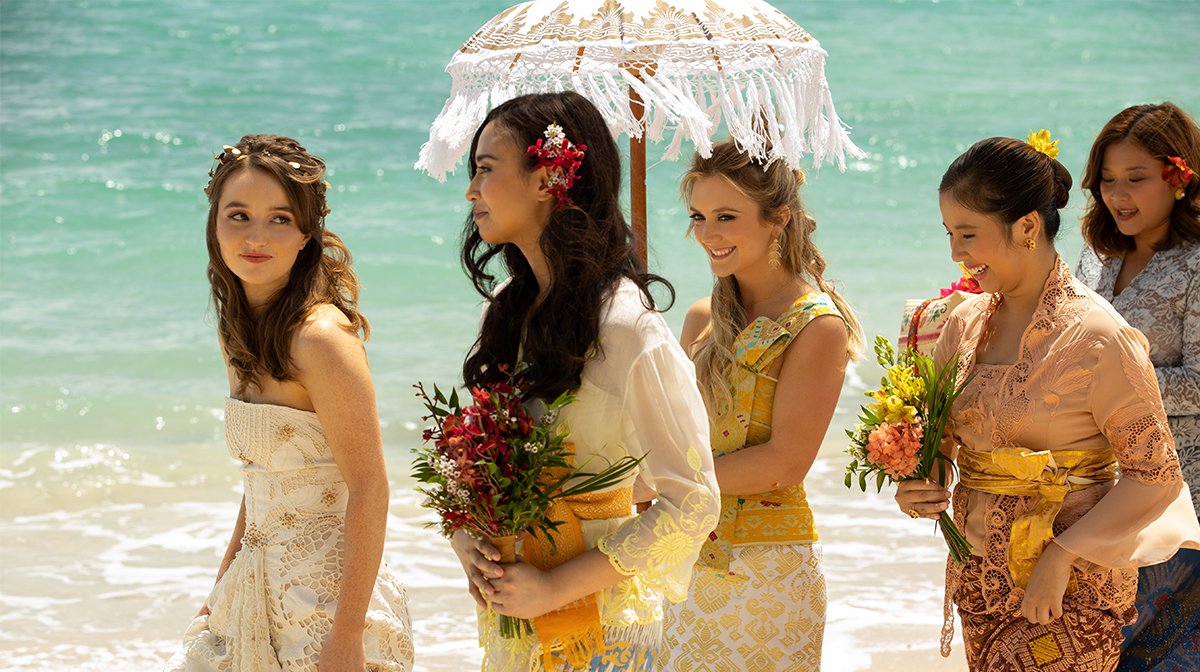 Whilst it is an emotional story, Ticket To Paradise is also fully aware that it’s a comedy, therefore it features many laugh-out-loud moments, the peak of which sees the characters challenge each other to a game of beer pong.

Watching Clooney, Roberts, and co. cut loose, dancing like there’s no tomorrow to party anthems, getting way too invested in the beer pong tournament, is an absolute treat.

You can tell the cast had plenty of fun filming this scene, with Lourd revealing that Clooney is the king of the bar sport: “George is the best, weirdly good. I’m not bad, so it was shocking and upsetting. I wouldn’t go toe-to-toe with GC on the BP. He is the LeBron James of beer pong!”

Dever added: “Normally they rig those shots to get it perfect, but he was hitting it every time – no rigging was needed!” 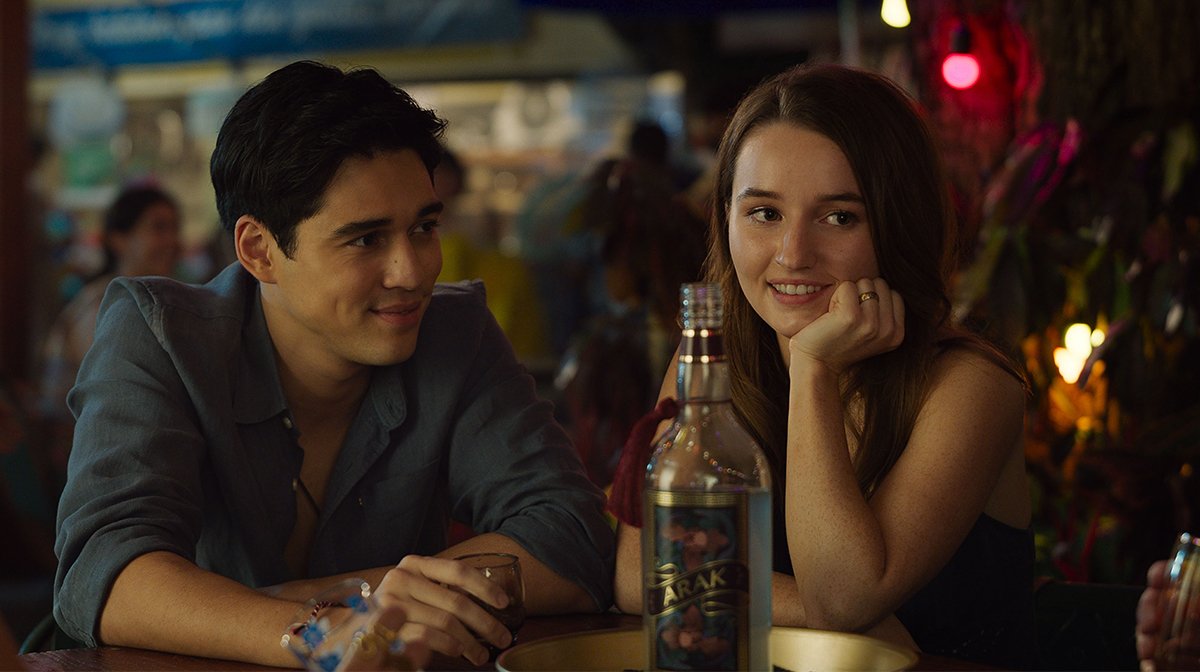 As you can imagine the beer pong scene resulted in many outtakes, which delighted director Parker who hoped to feature a blooper reel during the credits – yes, old school style.

However, some of these moments were so funny the filmmaker knew he had to include them in the feature itself: “I said to George early on in the shoot ‘I’ve never done a blooper reel in the credits before, but I think with this film we do it’.

“If he said he hated them, I would have thrown the idea out, but he said ‘yeah, maybe this one will work’, so we put it together. 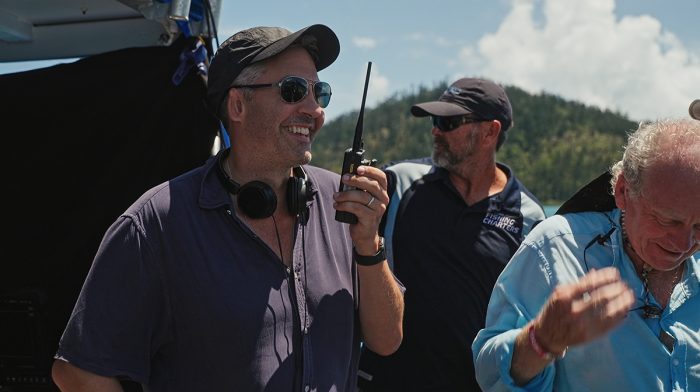 “There was a point during filming that drunk scene where I gave George a note to keep the ball in his mouth then spit it out. Julia cracked up so much we thought that moment would be for the blooper reel, but it ended up making the cut!”

One of the highlights of the blooper reel sees Bravo pranking Clooney whilst dressed as Batman, something which took guts as the Hollywood star is famous for being a prankster on set.

Bravo wanted to get one up on his co-star though, telling us: “Kaitlyn had just finished filming Dopesick with Michael Keaton, the first Batman, and since George has also been Batman he’d often ask Kaitlyn, ‘who is your favourite Batman?’

“I thought it’d be funny if I bought an old, washed up, Adam West ’70s costume with the eyebrows on, two sizes too small, and surprise him in a scene dressed up in that.

“It was really funny and he was surprised, but he’s really hard to prank. George is always a step ahead.”

It’s clear many lessons were learnt on Ticket To Paradise then. Never challenge Clooney to a game of beer pong. Pranks need plenty of planning. And it is possible to bring the big screen rom-com back!

Ticket To Paradise is released in UK cinemas on 20th September.