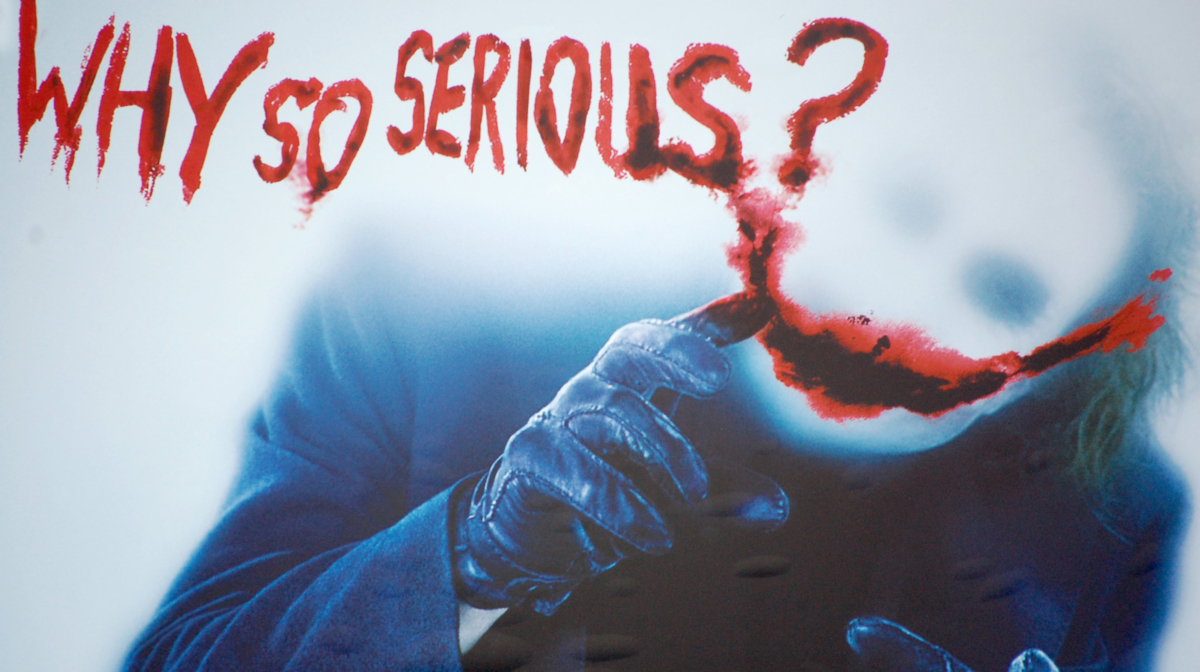 This year marked the 75th anniversary of DC’s most celebrated villain – the Joker. We say ‘celebrated’, and this shows just how strong the Joker’s sway is. Should we really be backing this malicious, sadistic psychopath? The origins of the Clown Prince of Crime are up for debate given his many adaptations and multiple personalities, but we’ll certainly cover a few as we go over his most prominent appearances. Which Joker is your favourite? Let us know on on Twitter.

It makes poetical sense that The Joker would appear in the first Batman comic; even if he was intended to be killed off! (Too bad to live, too good to die.) Throughout the 40s the Joker was more prankster than villain to appeal to a younger audience, but in 1951, a gruesome origin story was written for him, blaming his clown-like disfigurement on a chemical vat accident. Not long after this, the Joker went back to his less violent ways in line with restrictions by the Comics Code Authority.

The Batman TV show exaggerated the slapstick side of the comics and saw Cesar Romero play the Joker to Adam West’s hero. This hateful harlequin was obsessed with unmasking Batman, unlike his comic counterpart, and sported some of the silliest Joker weapons ever created, such as the ‘two-way hot dog transmitter,’ (made even sillier by the presence of Romero’s signature moustache which he refused to shave.)

Thanks to the TV show, comic sales were up, so Batman writers took the chance to move the Joker away from school-boy friendly adventures. After a 4 year absence, the Joker was revived and returned to his dangerous roots in Batman #251. The Joker’s reintroduction saw him used sparingly; a continuing trend which hasn’t diminished his growing popularity. This era of comics also introduced the Joker as legally insane, to explain why he is sent to Arkham Asylum instead of prison. The Joker also killed off the second Robin; altering the Batman-Joker relationship forevermore.

Written by Alan Moore (Watchmen), ‘The Killing Joke’ graphic novel expands on the Joker’s origins sympathetically for the first time, turning him into a tragic character; a family man/failed comedian who proves that “one bad day” can drive a man insane. This version of the Joker has influenced many of his interpretations since. The story’s effects on canon Batman continuity also include the shooting and paralysis of Barbara Gordon/Batgirl, an event that laid the groundwork for her transformation into the Oracle.

Tim Burton’s Batman film was a definitive move away from the campy TV series, with the tone and themes of the film influenced in part by ‘The Killing Joke’ and Frank Miller’s ‘The Dark Knight Returns’. Jack Nicholson wholeheartedly depicted the Joker’s insanity, as shown in the 70s run of Batman comics, but fans noted that the Joker seemed more of a focus than Batman himself in the film, and the audience should back the hero, not the bad guy.

The Batman film’s success prompted the creation of the popular Animated Series with Mark Hamill voicing the Joker, (a role he’ll reprise in the animated version of ‘The Killing Joke.’) Before the Animated Series, the Joker was recognisable by his purple suit with a long-tailed jacket, tie, gloves, striped pants and pointed shoes. So integral is this appearance to his character that the Joker quickly found himself back in his familiar attire after the show experimented with a straitjacket. The series also introduced Harley Quinn as a ‘romantic’ interest for the Joker, although their relationship is misogynistic at the best of times.

Heath Ledger’s performance as the Joker is debatably the most critically acclaimed and sees the character return to his most psychopathic form. This Joker is twitchy, grungy, decayed and entirely devoid of empathy. It’s said that Ledger prepared for the role by living alone in a hotel room for a month, formulating all aspects of the character and keeping a diary, in which he recorded the Joker’s thoughts and feelings. There’s nothing funny about the Glasgow smile, it’s all very serious…

In DC’s New 52 re-launch the Joker has himself captured and sent to Arkham Asylum to meet the Dollmaker – who surgically removes the Joker’s face as a symbol of rebirth. The Joker then escapes and is presumed dead, but later returns, (literally wearing his face,) to relive some of his old crimes and drive a wedge between the Bat family – Robin, Batgirl etc. Across this story arc it becomes clear that the Joker defines his existence purely through his conflict with Batman.

Love him or hate him? The critics and fans have had their say, and it’s all pretty split at 50/50 when it comes to Jared Leto’s interpretation. What do you think? We here at Zavvi think he’s pretty damn scary…