Dust off your S.T.A.R.S. uniform and creak open the doors of the Spencer Mansion with 1996’s Resident Evil – Capcom’s seminal shooter which shuffled into our lives 25 years ago.

With the franchise still going strong, it’s easy to forget it all started with a little survival horror that no one really knew would do that well.

Even though Resident Evil was simple, it gained a cult following, is credited with defining the survival horror genre, helped popularise zombies in the 21st century, and is held as one of the most influential video games of all time.

From the tiny acorn of the original, Capcom has continued to reinvent and resurrect Resident Evil like the T-Virus-ravaged zombies themselves. 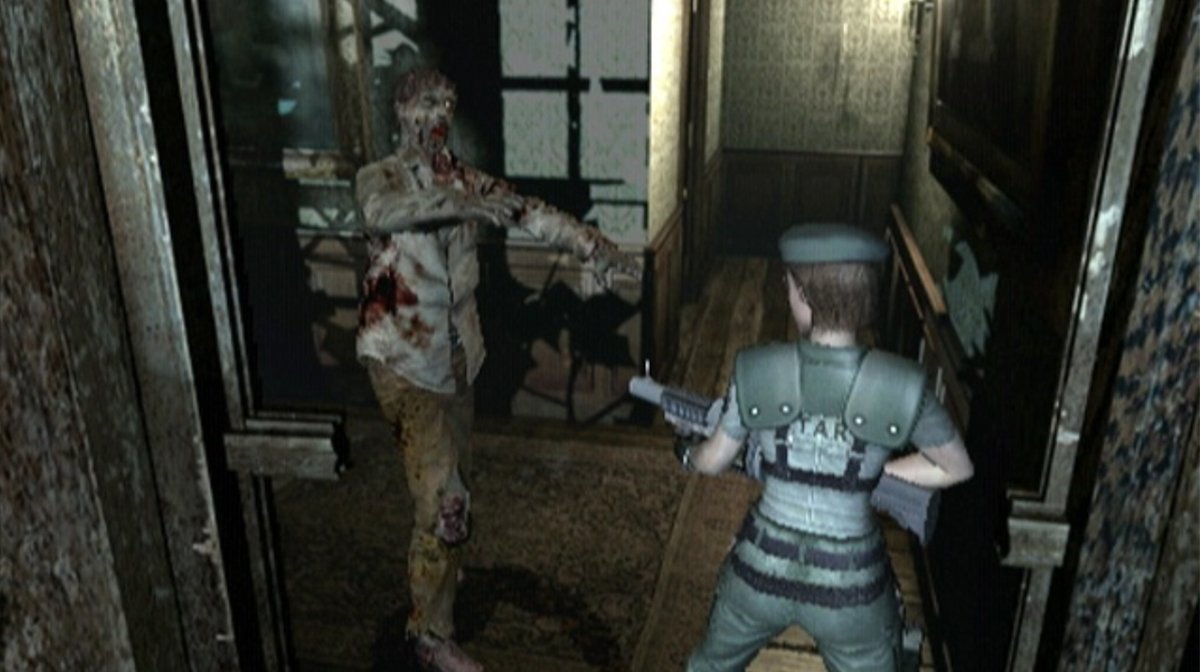 After success with Sweet Home in 1989, Capcom envisioned Resident Evil as a westernised remake for the Super Nintendo Entertainment System.

Director Shinji Mikami originally opted for a first-person viewpoint (in the vein of DOOM), however, changed his mind when he saw the cinematic third-person look of 1992’s Alone In The Dark. To this day, only one piece of concept art from the first-person Resident Evil remains.

Mikami used The Shining’s Overlook Hotel as an influence for the Spencer Mansion, while the premise of the haunted house of horrors came from Sweet Home.

Focussing on Chris Redfield and Jill Valentine, Resident Evil followed an elite task force that was sent to investigate the disappearance of its own in a zombie-infested mansion. 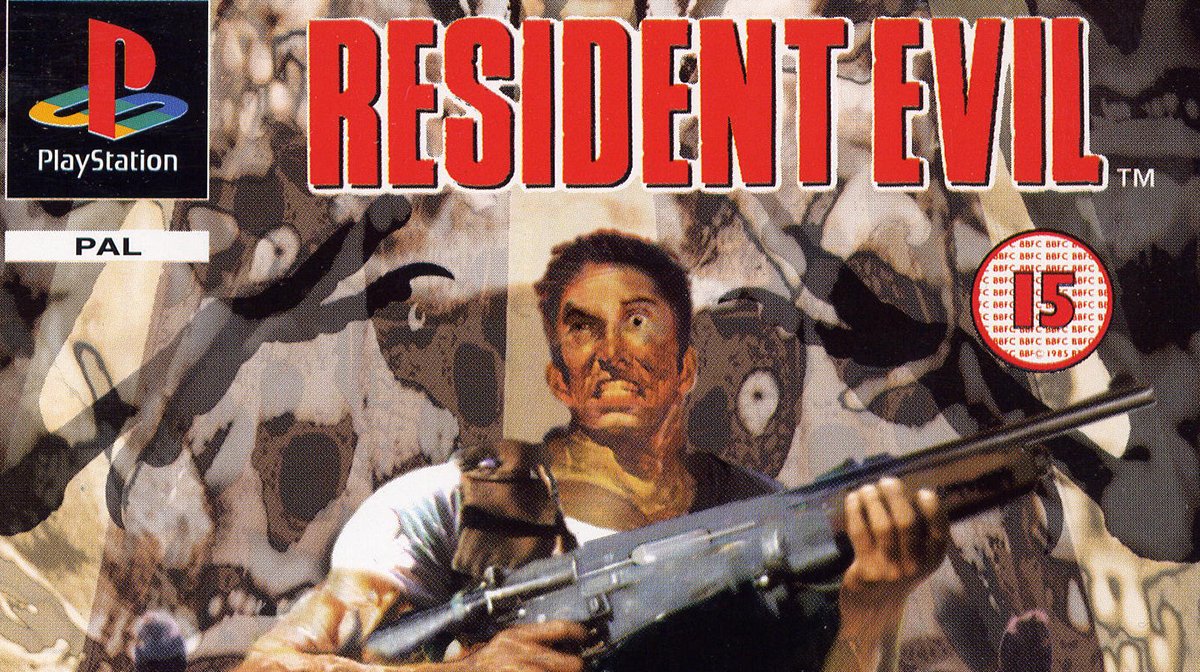 Long before the Assassin’s Creed games were letting you pick whether you wanted to be male or female, Resident Evil paved the way. Jill gave Lara Croft a run for her money with her lockpick and expanded inventory, while Chris was the rugged S.T.A.R.S. stalwart who struggled in terms of what he could carry, but outlasted Jill with strength and durability.

Resident Evil was groundbreaking for the time, as it boasted 3D characters superimposed on pre-rendered backgrounds for its signature style. You also had to play Severus Snape as you mixed items to make those healing herbs that helped Chris and Jill limp through to their next battle.

Although inventory systems appeared in the likes of Sweet Home, Resident Evil brought them to the masses. There was nothing worse than running low on ammo as you found yourself trapped in a hallway – destined to be greeted by the now-iconic words of “You Died”. 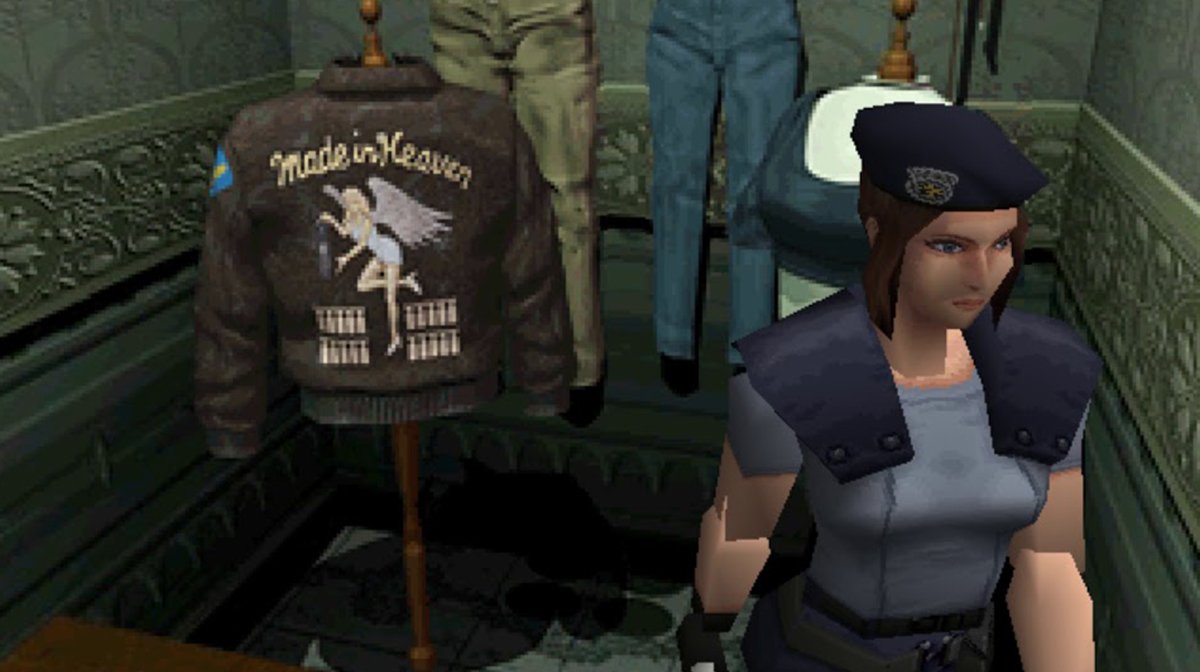 Speaking of pulse-pounding encounters, did anything compare with taking on the Tyrant? Yes, later games included the likes of Mr. X, but way back when, the souped-up Tyrant had us all hiding behind our cushions.

Long before the critically acclaimed fourth game introduced us to the Del Lago lake monster or Resident Evil 3 gave us Nemesis, 1996’s original had us battling the Neptune sharks, the Black Tiger spider, and Tyrant. That’s before we even get to setting up Albert Wesker as the man who would arguably become the franchise’s big bad.

For those who made it through Resident Evil with their nerves still intact, things came to a dramatic conclusion on the helipad. Players (and hopefully allies) faced-off against the Tyrant as Chris and Jill were given one of eight possible endings.

If you were a good little S.T.A.R.S. agent and saved your companions, you could all take on the Tyrant. If not, the ‘worst’ ending saw the playable character escape as the sole survivor as the Tyrant ran loose in the forest. Either way, it neatly set up an arc that’s still going to this day. 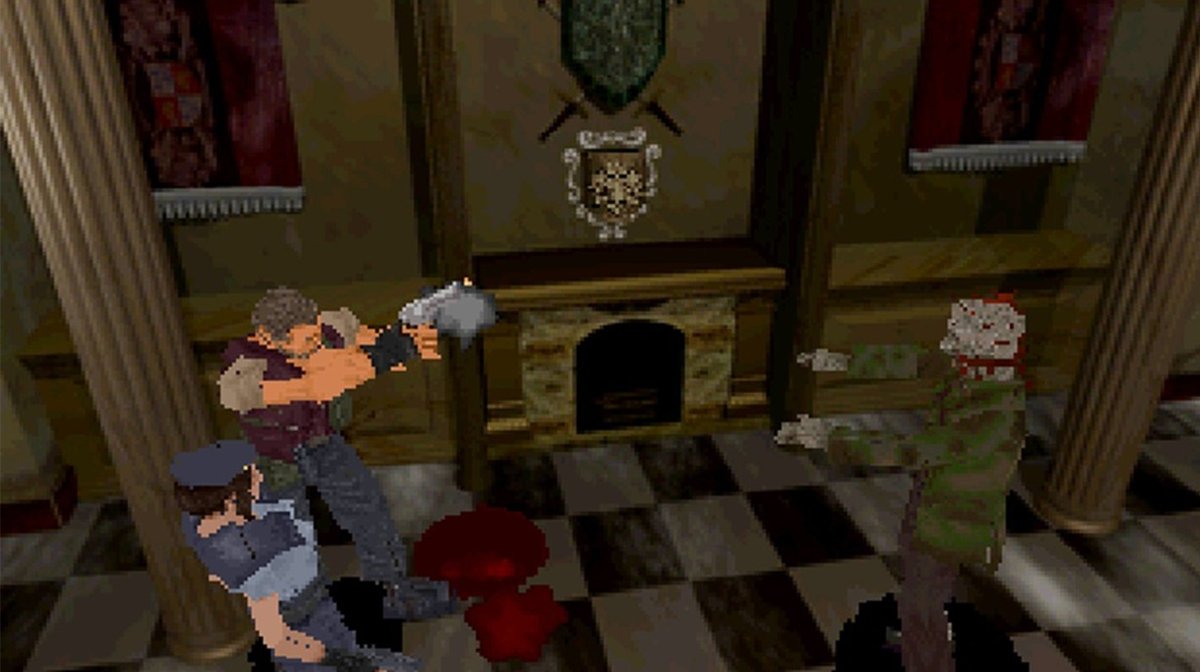 In 1996, the gaming landscape was a very different place. It was the year consoles and PC were dominated by Super Mario 64 and Quake, but whilst Resident Evil could’ve easily flown under the radar, it sold a reasonably impressive 5.08 million units across all releases.

It could have been a different game though as just like with the first-person viewpoint, several other features and characters were sent (quite literally) to the graveyard.

A graveyard area was axed and eventually added back into 2002’s REmake, while plans for a comic relief African-American called Dewey and a cyborg-esque character named Gelzer were swapped out for the more generic Rebecca Chambers and Barry Burton.

There were once plans for co-operative gameplay, but Mikami pulled it because it technically “wasn’t good enough”. Instead, we were left with a gripping story and core cast of well-rounded characters that have become mainstays of the series. 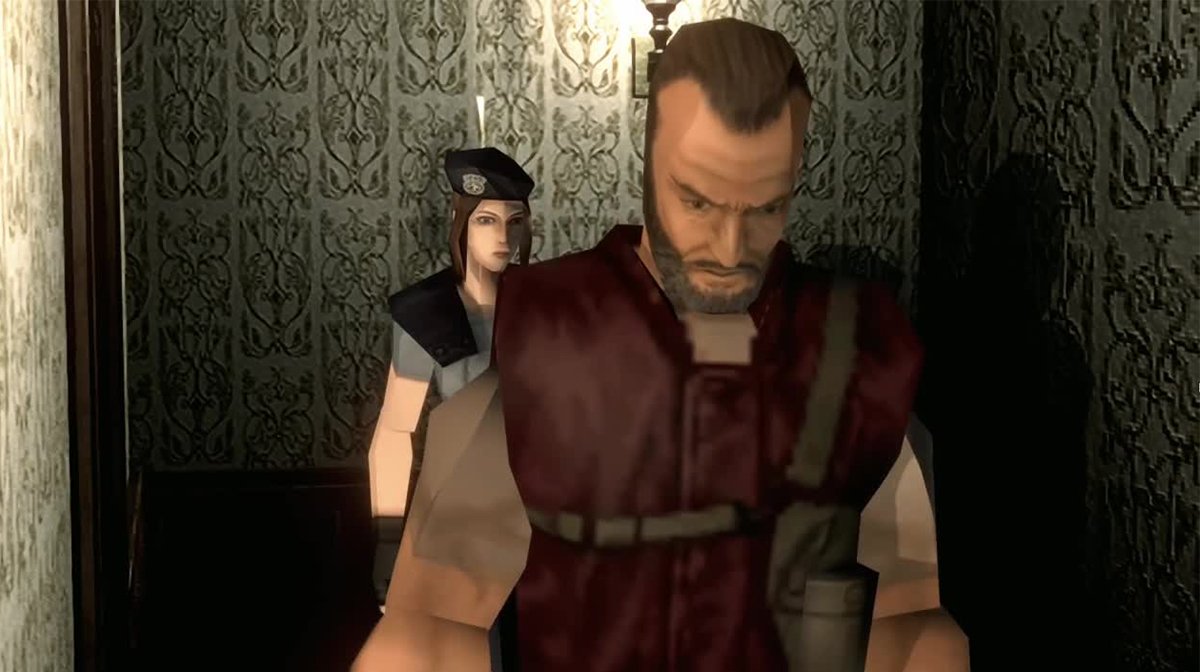 Elsewhere, Resident Evil opened with a gritty live-action sequence that featured severed heads and a B-movie style. These scenes were deemed too violent for most audiences and were heavily censored in the USA and Europe.

However, it was these scenes that first planted the seed for a live-action Resident Evil movie – that wouldn’t appear until 2002.

While zombie games are a dime-a-dozen these days, everything from The Last Of Us to Silent Hill can find their roots in Resident Evil. Even Devil May Cry started out as a proposed outline for Resident Evil 4.

And in recent years, we’ve seen a boom in popularity for the early days of the Resident Evil name. 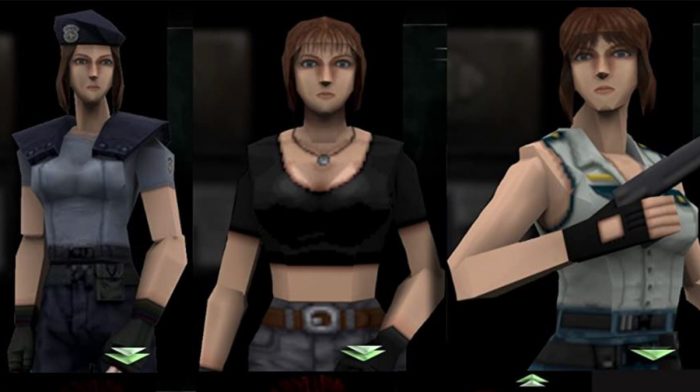 Despite the 2002 REmake failing to set the charts alight, the idea blossomed with a high-definition remaster for modern systems in 2015. The HD remake found a whole new generation of fans, so it’s no surprise its success gave way to Capcom remaking the main games. Of course, this isn’t the only way Resident Evil has fallen under this ‘umbrella’.

As well as popularising survival horror video games, Resident Evil has the honour of breaking into the wider world of pop culture. In live-action, Resident Evil’s influence can be found in the likes of 28 Days Later and The Walking Dead.

Sadly, no one has directly adapted the original Resident Evil in live-action. Although George A. Romero did have plans for a game-accurate movie, Paul W.S. Anderson eventually took over and instead delivered the Milla Jovovich-led action flick Resident Evil in 2002. 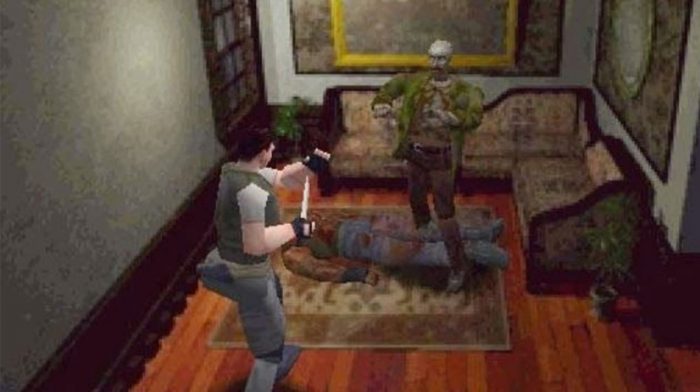 The first Resident Evil has also paved the way for an ongoing universe of games, shows, and movies. As well as a live-action series for Netflix, Sony is moving ahead with a movie reboot under Johannes Roberts.

He said: “I really wanted to go back to the original first two games and re-create the terrifying visceral experience I had when I first played them, whilst at the same time telling a grounded human story about a small dying American town that feels both relatable and relevant to today’s audiences”. 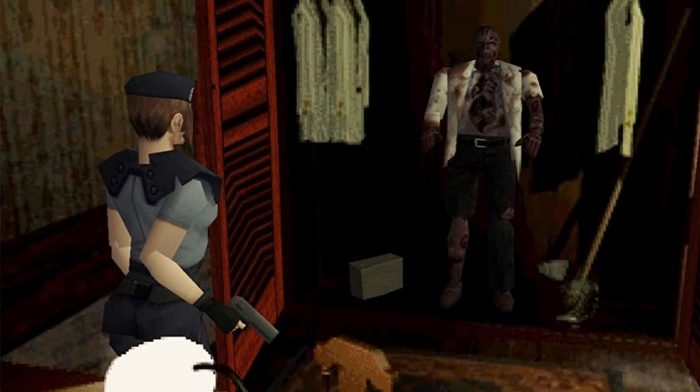 Even 25 years after we first met Chris, Jill, Barry, Rebecca, and Wesker, Resident Evil’s infected blood is still coursing through the veins of the franchise.

It’s no coincidence that the crumbling confines of Resident Evil Village’s Castle Dimitrescu look like they honour the original Spencer Mansion.

As the legend that is Resident Evil celebrates its 25th anniversary and Lady Dimitrescu prepares to spread her vampiric wings in Village, let’s raise a glass to where it all began.