It’s happened so many times, it’s almost a Hollywood cliché.

On paper, this was a film that shouldn’t have worked – three Americans with a totally British cast, making a very English story in black and white.

But the three Americans were producers Jonathan Sanger and Mel Brooks, and director David Lynch, making only his second feature, and the cinematographer was the legendary Freddie Francis. We’ll come on to the cast in a moment…

With his debut film Eraserhead three years before, Lynch established himself as something of a Marmite director, yet The Elephant Man, which celebrates its fortieth anniversary this week, is the closest he’s ever come to the mainstream or the conventional, even though the nightmare-scapes that characterised his future offerings are already very much in evidence.

Based on the true story of the so-called Elephant Man, Joseph Merrick (re-named John Merrick in the film), it’s easily his most accessible work, combining art and good cinema in equal measure.

But does that make it his best? 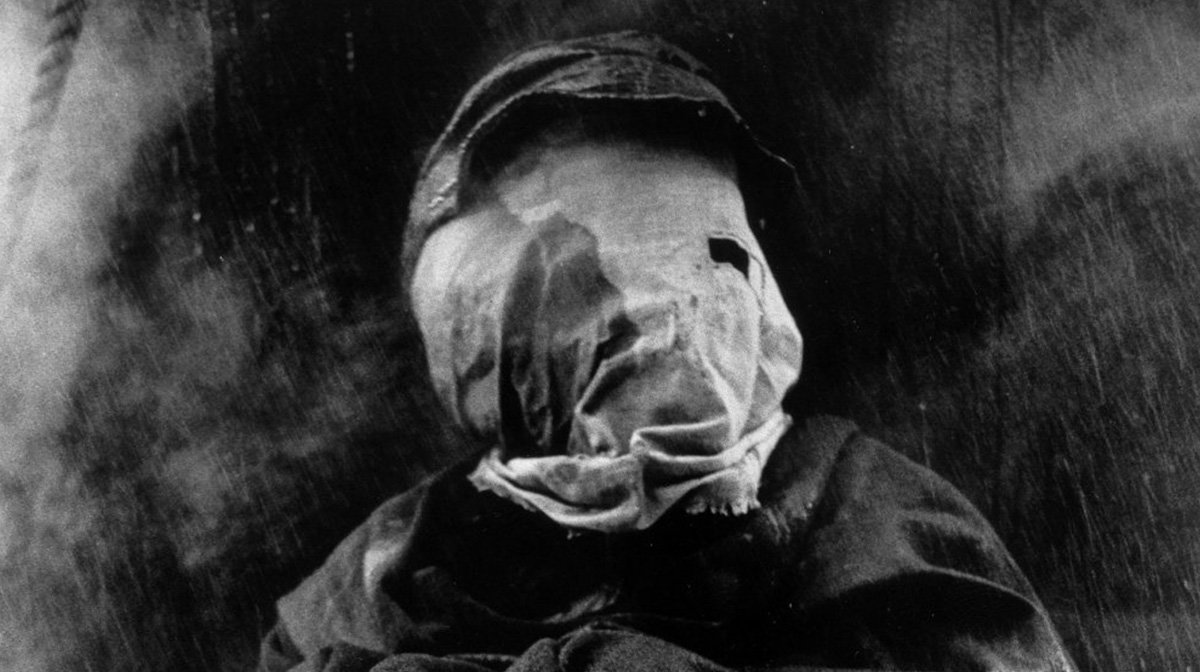 Aside from the whackiness of Blazing Saddles and Young Frankenstein, Mel Brooks was looking to make what he considered “real movies”. Producing meant he could do just that, but stay in the background so that fans of his comedies wouldn’t be confused.

Jonathan Sanger, his partner in the newly-formed ‘Brooksfilms’, got his hands on the first draft of a script called The Elephant Man, based on Merrick’s story, telling how he was rescued from the horrors of the sideshow world in Victorian England and became, firstly, a case study for a leading doctor and, subsequently, a national celebrity.

It was a story that resonated personally with Brooks, who had been bullied as a child.

Having seen Eraserhead, Sanger believed Lynch was the man to bring the dark but highly moral tale to life – and once he’d read the script, the director agreed. 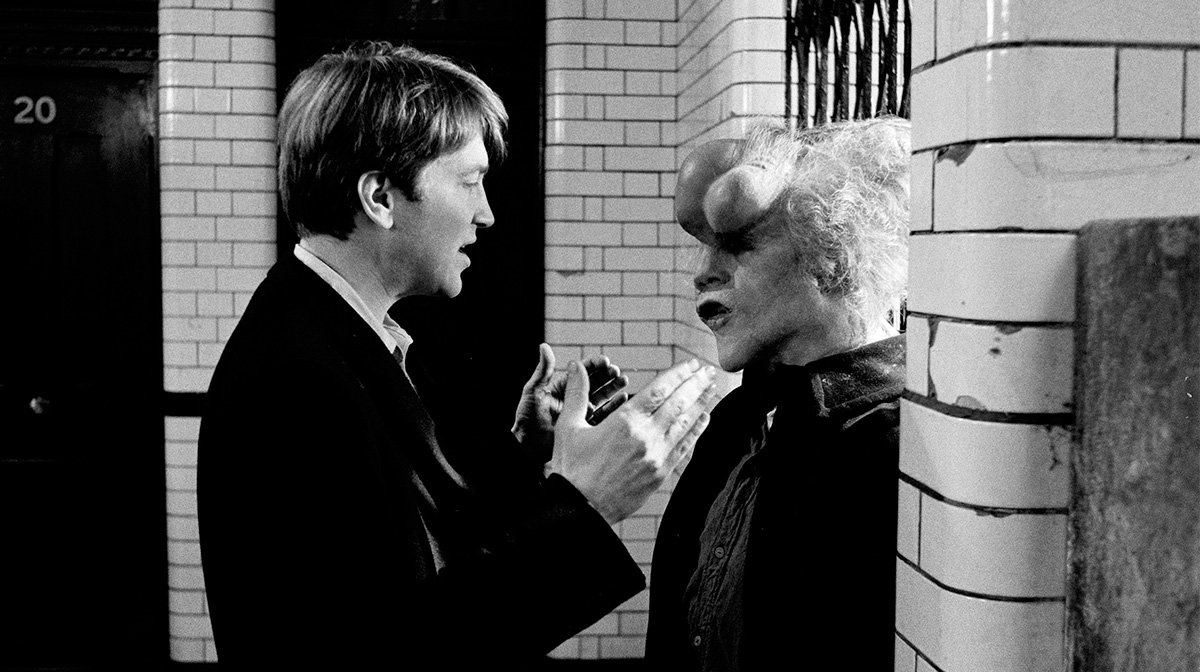 The combined might of a budget, Brooks’ support, and studio Paramount’s backing gave Lynch the freedom to put together an exemplary cast of British talent.

Anthony Hopkins, who played surgeon Sir Frederick Treves, had already been recognised by BAFTA for his role in the TV version of War And Peace.

John Gielgud’s stage and screen career was legendary, and Freddie Jones was one of the best character actors going. 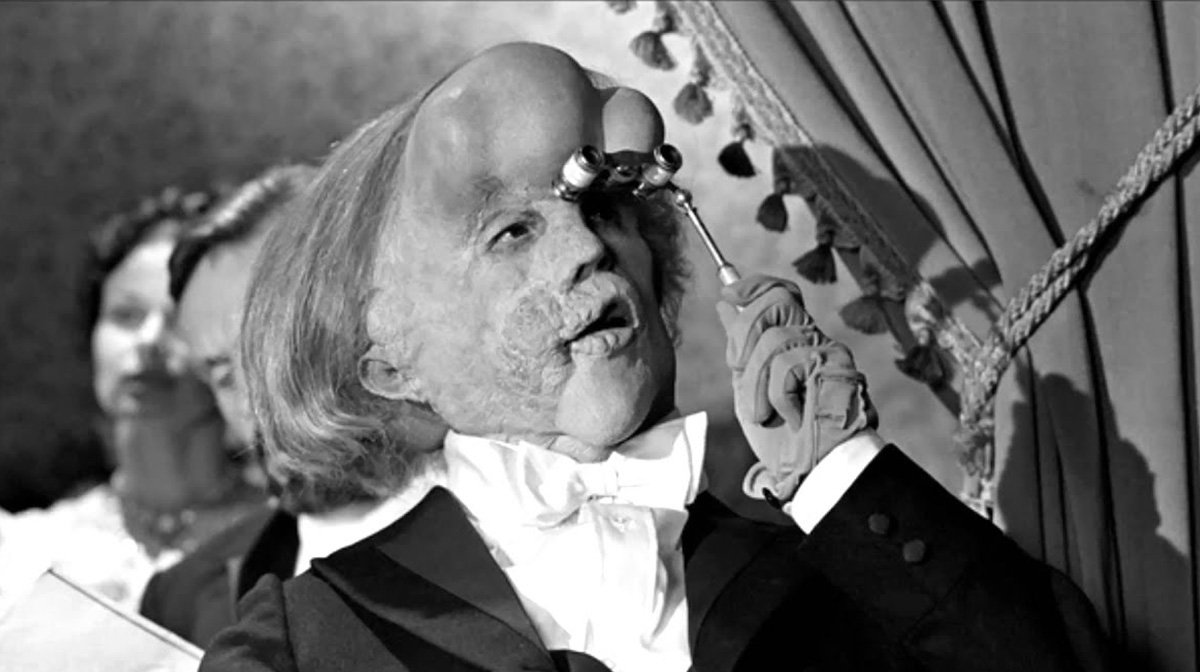 Casting Merrick himself, however, was more of a problem. Dustin Hoffman was originally considered for the role, but Brooks resisted, thinking that a big star name would be a distraction: the audience would be continually trying to glimpse the actor under his make-up.

The eventual choice was John Hurt who, despite earning a Best Supporting Actor Oscar nomination for Midnight Express, was a lesser known proposition.

His performance was built around a gentle, quavering voice, projected through complicated and intricate prosthetics created by BBC specialist Christopher Tucker, who based them on a plaster bust of the real Merrick, on loan from The London Hospital. 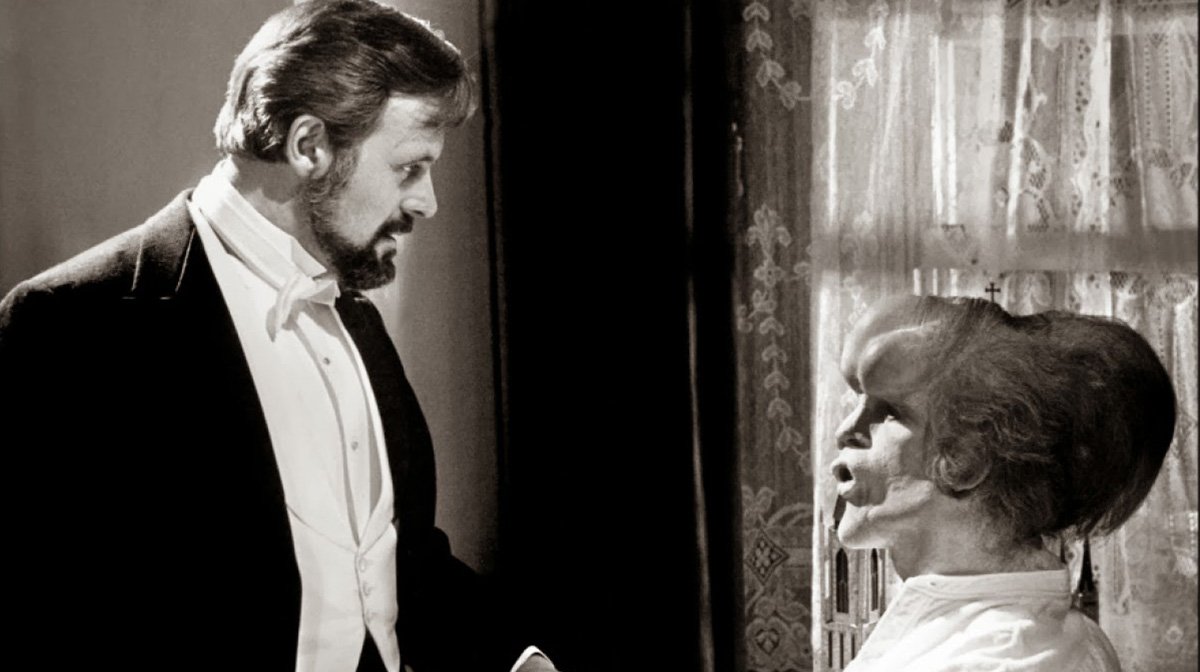 By all accounts they comprised of 17 parts, took eight hours to apply every day, and apparently caused Hurt to comment that the film’s producers had found a way to make him hate acting.

Not that it stood in the way of his sensitive portrayal of Merrick, one that combined physicality and emotion, and earned him another Oscar nomination, as well as the BAFTA for Best Actor.

The film affected audiences and critics alike, as well as Hurt himself who was widely reported as saying that: “If you’re not moved by the time The Elephant Man is over… then you’re not someone I want to know.” 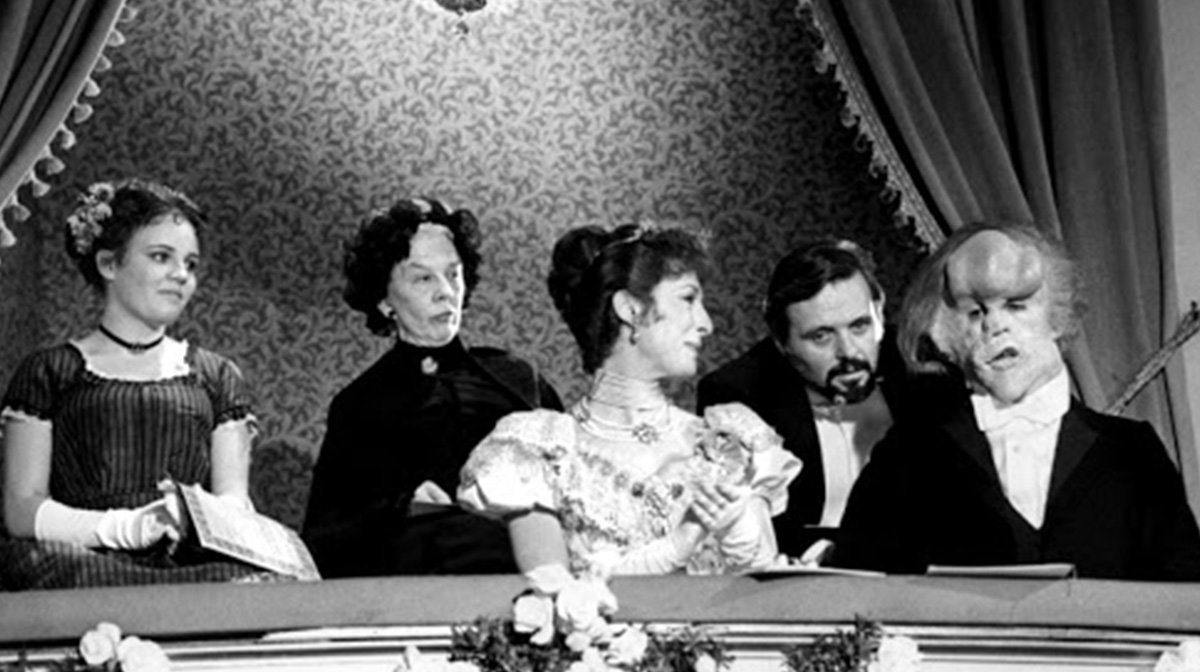 Aside from Hurt and his prosthetics, the other stand out in the film was the black and white photography, the work of cinematographer par excellence Freddie Francis.

A veteran of numerous horror movies, he shot The Elephant Man in a stark monochrome, with two startling results.

It captured the Victorian period, both as its most opulent and extravagant, and at its most grubby and sordid.

And it also emphasised the more horrific and hallucinatory aspects of what is essentially a story of grace and agony, strengthening the film’s already considerable emotional pull. 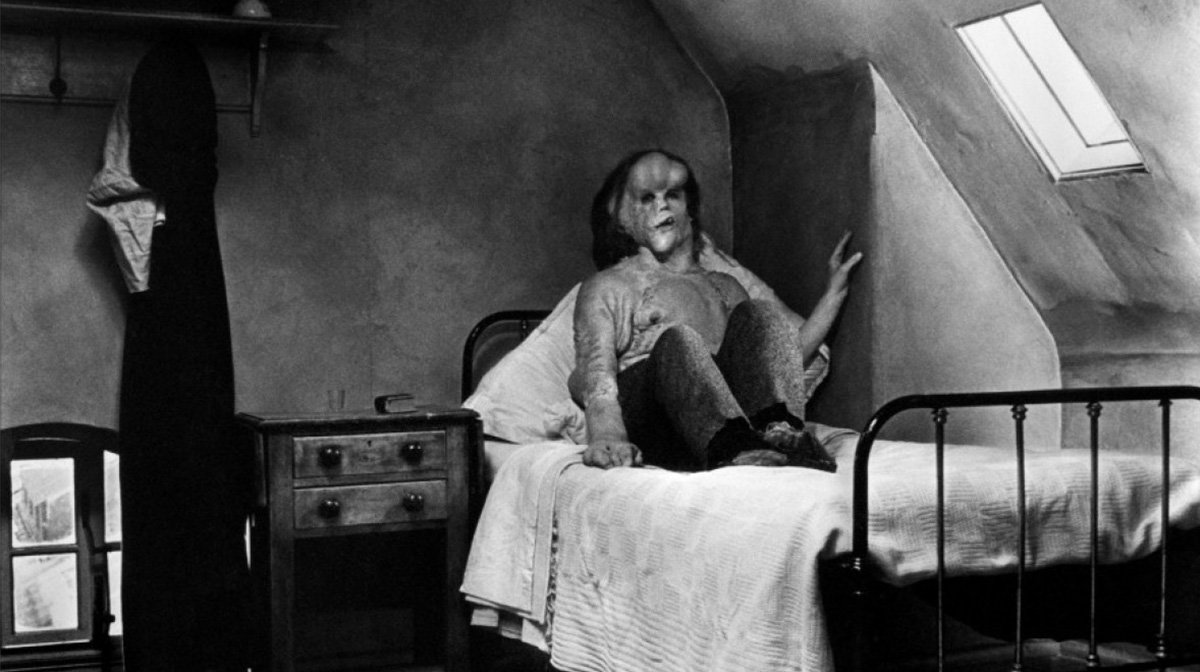 This isn’t a straightforward historical biopic. It’s more a portrait of humanity at its best, and its worst, with the tormented and abused Merrick meeting instances of both as his story unfolds.

The cruel Bytes (played by Jones) exploits him as a circus freak for his own ends, to be laughed and jeered at, as does the seedy Night Porter (Michael Elphick) at the hospital.

By contrast, physician Frederick Treves (Hopkins) tries to steer his patient towards some kind of peace, and perhaps even acceptance, by wider society.

Such a heavily emotional subject matter needed grounding, and this was provided by familiar faces such as those of Gielgud, as well as Anne Bancroft and Wendy Hiller, who made sure that the film was something more than a fantasy, nightmarish or otherwise. 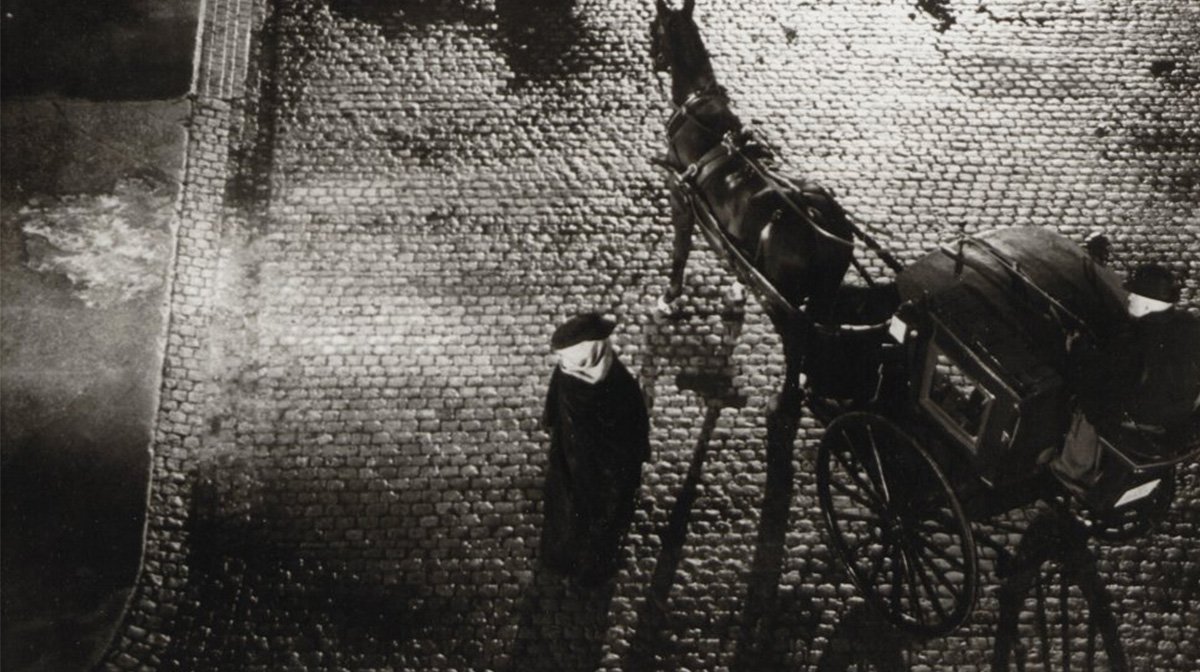 It all makes for a deeply compassionate film, one with an emotional strength that hasn’t been seen before, or since, in Lynch’s work. And it still has the power to draw out all kinds of emotions from today’s audience – just as much, if not more, than when it was originally released.

It shocks, disturbs and outrages as the gentle Merrick is made to suffer, yet it still manages to take an unsentimental attitude to his condition, concentrating instead on the moving and empathetic.

In terms of Lynch’s output, The Elephant Man is unique. It stands in splendid isolation thanks to the simplicity and skill of its storytelling, the strength of its cast and, most importantly, the way it squeezes our hearts and refuses to let go.