Frank Is An Original, Playful And Deeply Compassionate Tale Of Creativity

As I sat down last night to watch Lenny Abrahamson’s Frank, I had no idea what to expect. All I was aware of was that it starred a considerably decent Hollywood cast for an independent British & Irish film, and that it involved the fetishism of Frank Sidebottom’s ‘mask’ by leading man, Michael Fassbender. Freed from his monotonous life as a nondescript sales executive and bedroom amateur musician, Jon (Domhnall Gleeson) is unexpectedly whipped away from his British seaside home-town by the bass player of the Soronprfbs – Don (Scoot McNairy) – after their current keyboard player seemingly has a mental breakdown – a recurring motif throughout.

Much to the nonchalant disapproval of the rest of the band, mainly the manic Clara (Maggie Gyllenhaal), Jon joins them on a ferry to Dublin, where they go to record their new album. The only way Jon is able to remain in the band is because he has front-man Frank’s approval. What follows is a childlike existence of extended musical jams and erratic fall-outs, the only connection to the outside world being Jon’s tweets and YouTube videos of the band’s progress. Certain band members start to victimise Jon and humiliate his musical efforts, although his bond with Dom and Frank continues to grow.

Nobody puts Soronprfbs in a box – unrestricted art in Frank 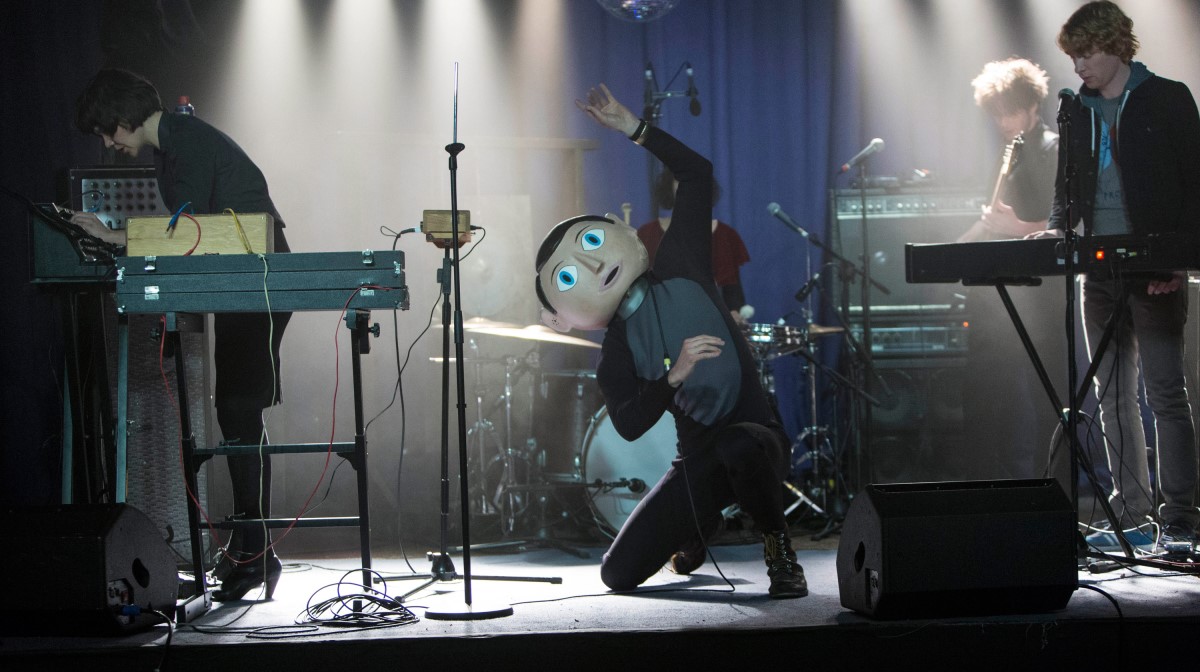 A large part of Frank is it’s comment on creativity and art, more so the concept that true art cannot be tamed. As the relatively sane, straight-laced Jon comes into contact with the Soronprfbs, he immediately begins to imagine where this musical project could end up. The possibilities and potential for Soronprfbs, in Jon’s mind, are bigger gigs, internet cult followings and a spot at Austin’s South by South West festival. The band however, seem unaware of their potential to go anywhere, and seem resistant to change and suggestions from Jon. The comments on art being pure are reassuring in a world where the trend is teetering towards art being edited and tailored towards mass markets for profit.

When we see Soronprfbs in their element, syndicated in raw sound, the essence of creativity can be seen in it’s purest form, and in a way that’s what this film is: a exposure of what it means to truly live something, regardless of it’s meaning. This is shown when the Soronprfbs are asked how they pronounce their band name, they simply don’t know, and don’t care. The same goes for Frank’s mask, the fact that it is replicated from the left-field British comic character Frank Sidebottom isn’t even mentioned in the film, because it doesn’t matter. Frank has chosen the mask because he likes it, the same reason the band play experimental music. Don’t bother asking Soronprfbs why they are the way they are, they simply are and they’re passionate about it. And that’s raw art. 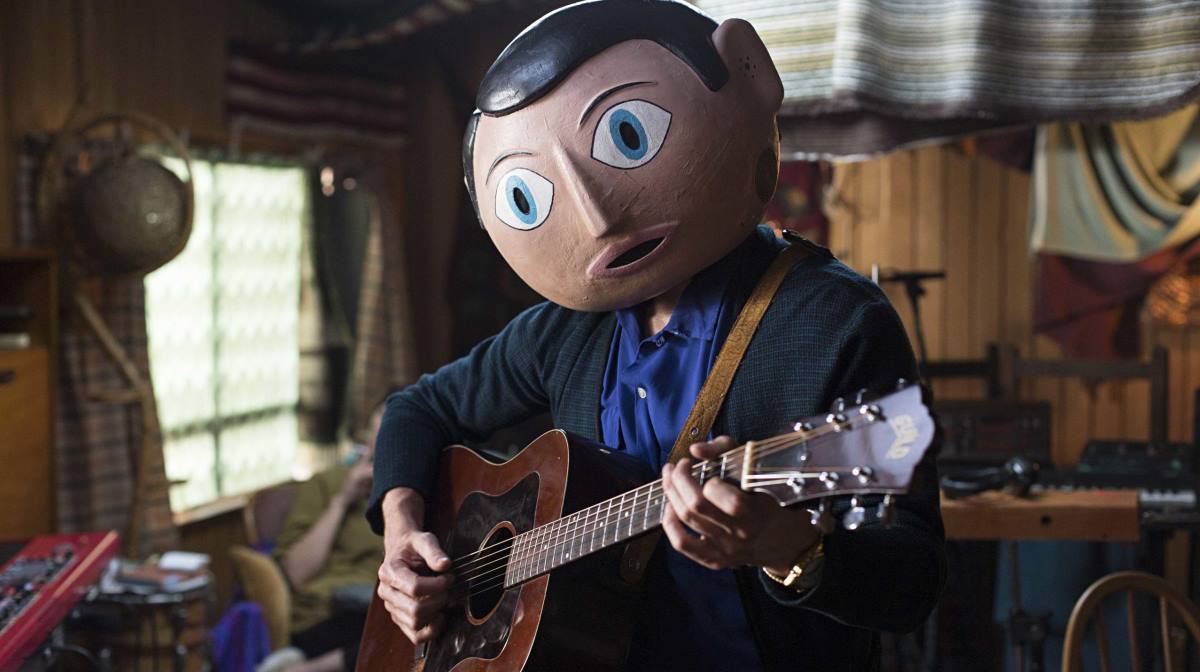 Underneath the green fantastical backdrop of the Dublin woods, a sense of loneliness and frustration is apparent in the characters. This is apparent in Clara’s increasingly manic episodes, which culminate in her attacking main character Jon in Texas. The theme is continued on into Dom’s character, who mentions his previous ‘issues’ and how he’s adapting to life. The elephant in the room however, is Frank, who seems to have some problems of his own. Frank is led on by his band-mates, who seem to be able to tell him what to do without any resistance, especially Clara.

As the film nears its end, it becomes apparent that Frank is the most mentally affected out of the group, as he starts to become disorientated and direction-less as different members of the band start to influence him to make different decisions, the next often contradicting the last. Frank experiences a mental breakdown of his own as he runs away to what seems to be his childhood home. 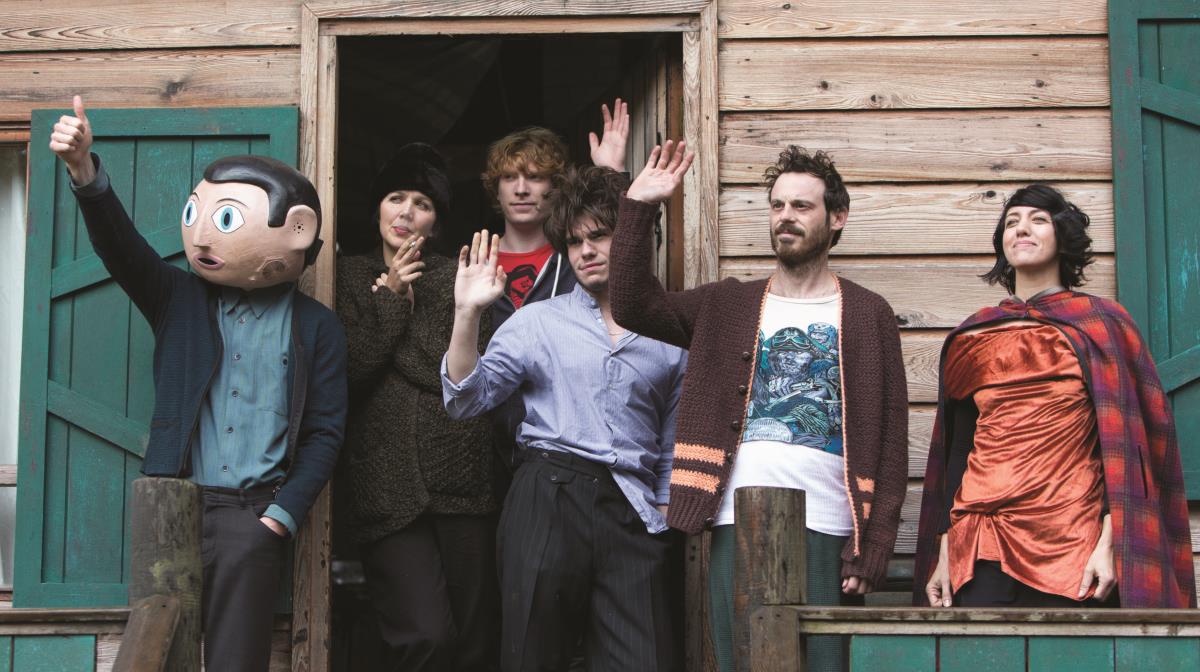 Images of brooding musicians with unconventional haircuts, unshaven faces and sullen postures are ten-a-penny on album covers, band websites and city streets. But what if this image wasn’t just an image? What if the dishevelled look was truly because of all the hard work and effort put into writing an album? Or the awkward persona just a consequence of lack of sleep due to relentless gigging? It seems so many bands and ‘artists’ these days come with a handbook on how to dress unwell, but in Frank it is almost as if we have been shown the real deal: too raw to tame and too loose to record; every music lover’s ideal.

The mental health aspects touched upon in Frank are also linked to the purity of art.  The band members of Soronprfbs are literally lost with their music, they seem unable to function in the real world, acting awkwardly when they come into contact with anyone who isn’t in their immediate close-knit group.

There are many comedic elements to the film, such as Frank’s ‘most likeable song ever’ and the increasing alienation of Jon which ultimately leads to brilliant one-liners. One example is when the band go to stay in cabin to record the album for ‘as long as it takes’, to which Jon replies ‘I did kind of tell work I’d be back for Monday.’

Frank is set to become a modern cult classic,  just as Frank Sidebottom was before it, although the only thing they share in common is the mask and half the name.