PES 2015 marks Konami’s first attempt at bringing their popular football series to the next generation of consoles. PES 2014 didn’t make it to PS4 or Xbox One which gives Konami a chance to create real statement.

PES 2015 has made real progress in combatting some of the issues that plagued previous games which were mostly apparent since the dawn of the PS3 and Xbox 360. Sluggish controls have now been given the red card and awkward, clunky menus have been sidelined. What we now get from the moment you start the game is a product that is clean, slick and highly polished.

I was keen to play PES this year – and it didn’t disappoint: gameplay is where Konami have absolutely killed the competition this year. It may take a few games get used to how PES 15 plays resulting in initial frustration that people may have disliked about the demo. Keep playing though, and within an hour you get a great feel for the game. Gone are the days where you can press X coupled with a vague push on the left stick to complete a perfect pass. PES really makes you work for yourself.

The AI of teammates is superb. They make great runs and intelligent movement all over the pitch: It’s great to be in the middle of the park looking around to see Ronaldo bombing it down the left wing pointing in front of him, demanding that you pass the ball to his feet. It’s equally great to see a defence holding their line so well and marking players, watching the attacking teams’ movements and adjusting positions so fluidly. This in no way means that the computer does everything for you in PES 15, in fact, it’s quite the opposite.

What I find to be an absolute delight in this years iteration of PES is the need for real craftsmanship in your game. You cannot just slide a ball up-field knowing that your striker will grab it followed by a run and then a finessed shot from 10 yards to the corner of the goal. Instead, you have to calculate and time the pass to near-perfection, negotiate the last line of defence and then pull off a clever chip, smash-shot or placed shot around the keeper.

In build-up play, the left stick allows for some great dribbling skills and when paired with the right stick correctly you can create some truly devastating and defence-killing skill moves. These moments are complimented well with the great response time on the controls, something that wasn’t present previous years.

Players move on pitch as they do in real-life. Characteristics from 1000’s of players have been implemented into the game which makes them instantly recognisable in-play. Player-likeness is also much improved in cut-scenes with great realism and detail. Lighting in the stadiums is superb with hugely different and accurate representation of a sun-soaked Allianz Arena to a night-time rainy evening at Old Trafford. The stadiums look good and the atmosphere in them reflects much of what happens at a football match. The crowd look dynamic and chants can be heard high into the rafters mid-match with great reactions to in-game events such as exciting runs, passes, goals and outrage at dirty tackles and refereeing decisions. 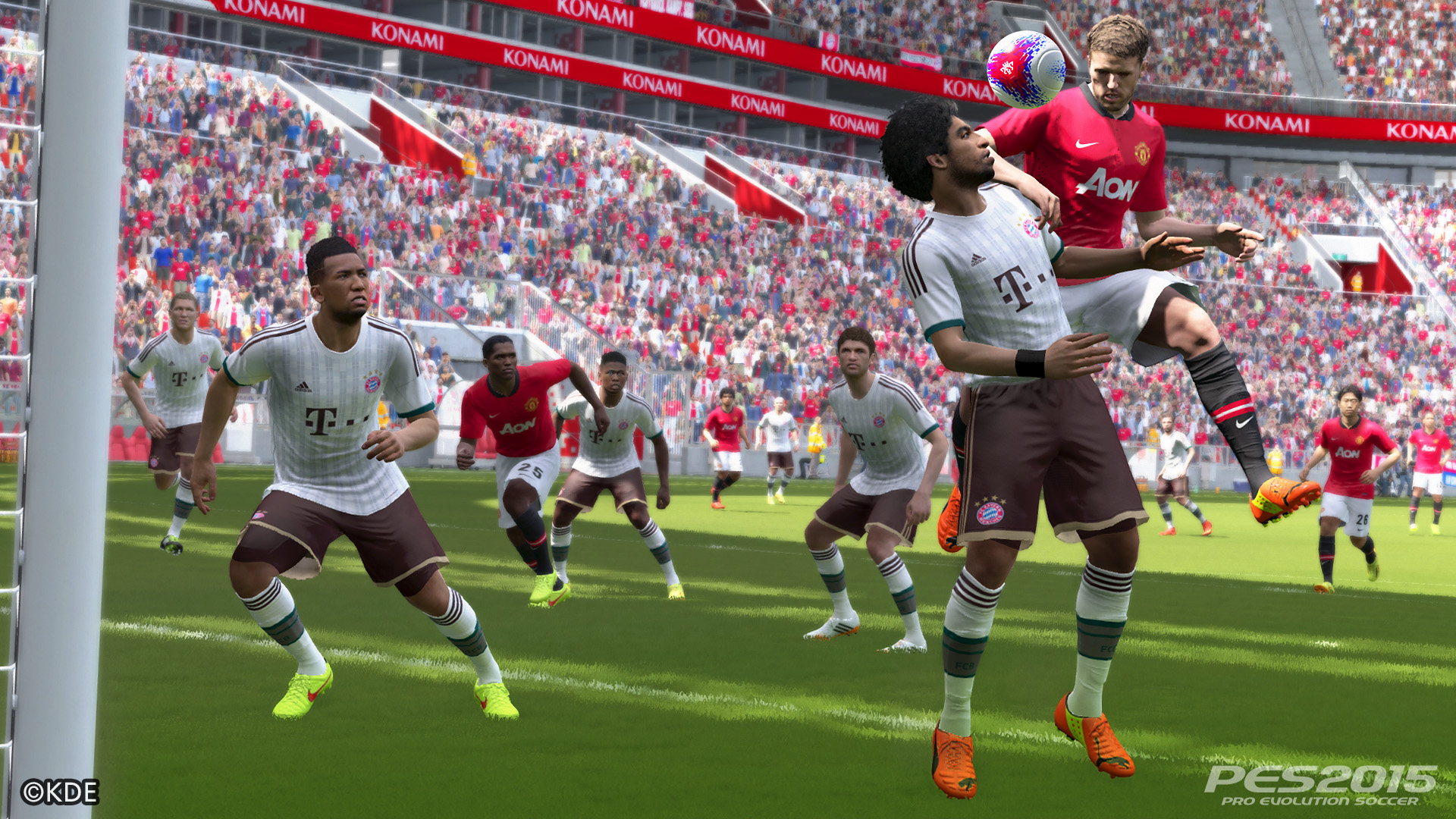 At first, I was playing PES in the same style that I had been playing FIFA 15, happily sliding in on harsh tackles and knocking the opposition around. This however resulted in a huge amount of yellow cards and many, many red cards. Timing when tackling is very important and if done properly a last-ditch attempt at the edge of the area can save you from conceding a disastrous goal, but go lunging in without thinking and it’s very likely cards will start to fly. (The screams from fouled players really is quite satisfying!).

When used to it, it works well and a very good free-flowing game of football is played out, but do it wrong and it will be stop-start from beginning to end.

Refereeing decisions tend to be accurate and fair most of the time however there can be some frustrating decisions that go against you, especially when repeatedly tapping X to tackle, players seem to lunge too much which loses any pace you had and can sometimes result in conceding frustrating free-kicks and penalties without even intending to do this.

Offsides are very tight decisions and even a hair-length over the back line and play will stop. All in all, officials’ decisions are generally accurate and fair.

Attacking in PES 2015 is fun and the build-up play really builds the excitement as you get closer to the goal and hold up play whilst waiting for players to find space and create runs, much of which is done very well. This is also a great time to have a grasp of the manual passing system, which is done by holding L2 whilst choosing the direction of the ball with the left stick. I’ve played many manual chipped through-balls and ground passes that carve the defence like a Sunday dinner resulting in some truly spectacular goals, and the best thing about it is that you feel like you’ve worked hard and deserve it!

Defending takes some getting used to. I find that in FIFA, hounding players is usually a good way to get hold of the ball whilst smacking Square to pull shirts. In PES, there is much more attention needed to containing the attacking threat and making intelligent tackles and defensive movement. Holding X when close to another player creates a tussle O a slide tackle, but there is still room for improvement in this department and the physicality of defending does need attention for next time.

Commentary by Jon Champion & jim Beglin is improved but still feels wooden and scripted with lack of humour.

Online and MyClub features were not available at time of review but if they follow suit of the rest of the game, these should be great additions. Live weekly updates similar to those on FIFA also feature this year.

Overall, this is a welcome and long-awaited return to form for PES. This years game is the most intelligent football game on the market. It doesn’t have the bells and whistles that FIFA has, and this is especially apparent with the ongoing lack of licenses for team names, frustratingly bad tactic screens and an under-developed training section which could really take advantage of the more exciting and developed controls, but where every football game really needs to excel is on the pitch, and this year Konami have beaten the opposition.

Konami have once again created an intelligent and truly exciting football game, arguably the best since PES 6 which is a huge achievement. This year, the pitch belongs to Pro Evolution Soccer 2015.

The Good…
Great gameplay, most realistic football game on the marke and excellent AI.

PES 2015 was reviewed by Jacob Shaw as part of our ‘write for us’ competition.