5 Of The Greatest Retro Futurism Films You Cannot Miss

With science fiction movies getting older than ever, we take a look back at some of the greatest retro futurism movies of all time. Not only giving us their unique visions of a dystopia or utopia but are also some fantastic movies. Here are our favourite retro-futurism films that you absolutely cannot miss.

What is Retro Futurism?

The term Retro Futurism comes from the past’s vision of the future. It’s a unique outlook that not only presents us a unique vision, but also imprints their own social contexts. The term was coined by Bruce McCall in a talk at Serious Play in 2008. Notable Retro Futurist artists include Syd Mead, Frank R. Paul, Peter Elson & Bruce McCall. 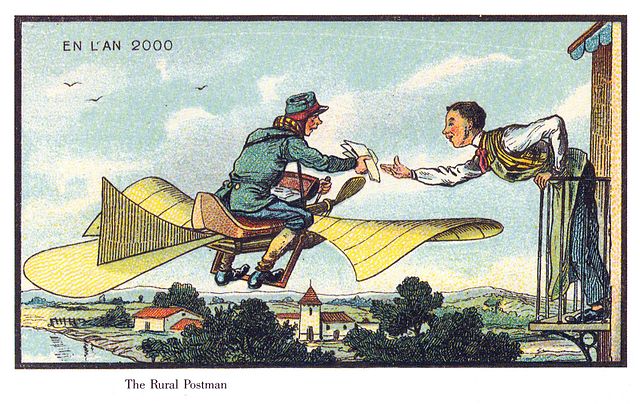 A French Artist from 1900 depicting what life would be like in the year 2000.

Fritz Lang’s Metropolis was made in 1927, and is often cited as one of the first science-fiction movies ever made. It’s a long, silent movie that has intricate special effects, in addition to a striking visual style that seems to be a mixture of Steampunk and Art Deco. It’s a German Expressionist’s view on a uber-stylised future, with a burgeoning underclass behind the slick future, enormous buildings and more. This is a stark contrast to Lang’s previous work, Die Libelungen, which focused more on fantasy visuals, based on the poem Nibelungenlied.

This iconic movie, directed by John Carpenter and starring Kurt Russell is hugely influential. Not only does it depict a vision of a ruined New-York City, which has been walled off, but its striking visual style pops out at you. From the maps to computer consoles and generally ruined dystopia, Escape From New York presents us with its own unique style and tone that is seldom seen in similar films today. The flashes of society and culture are scarce, but still there and it makes for absolutely essential viewing.

Logan’s Run might be one of the coolest Retro-Futurist movies we’ve ever seen. The year is 2274, and the last of the human civilization live in domes. We see that society has fallen into hedonism, and everyone must undergo a trial when they hit the Age of 30, this trial involves killing that person. The aesthetics around Logan’s Run are very idyllic and utopian, with the movie looking like it is straight out of the cover of a classic sci-fi novel. Logan’s Run might have aged, but its classic story and tone have an alluring charm that’s hard to shake off.

2001 might be a movie which many lauds as being one of the best movie ever made, but it also has retro-futurist elements to its aesthetic that seem to be lost in the grandeur of its narrative. From the layout of the rooms to the general colours and hues used, 2001 is a retro-futurist masterpiece in design and aesthetics. If you’ve never seen 2001: A Space Odyssey, now is the time. No more excuses!

Brazil is one of Terry Gilliam’s greatest works. With striking visuals and more non-traditional vision of the future that’s filled with striking neon and pack to the brim with excess, fulfilling what the film set out to do. It’s a consumer-driven dystopia made in the background of 80’s excess, and that’s perfectly reflected not just its cinematic flair and style, but also in the way that it presents its overarching themes of satirising bureaucracy and more, Brazil is one of the quintessential retro futurism films that are completely unmissable.

For more on the latest Films, check us out on Twitter!