On 2nd October 2018 journalist Jamal Khashoggi walked into the Saudi consulate in Istanbul to get documents so he could marry fiancee Hatice Cengiz. That was the last time he was seen.

It was a story that got the attention of the world which called out for the truth to be revealed, and it was soon confirmed that he had been assassinated by agents of the Saudi government with the orders being given by the Crown Prince Mohammed bin Salman himself. They have not yet been prosecuted.

Following on from winning the Academy Award for his documentary Icarus which exposed a major international doping scandal, director Bryan Fogel tackles this shocking story in his new movie The Dissident which is set to receive its UK premiere this week at the Glasgow Film Festival.

Delving deep into the circumstances surrounding both the murder and the subsequent cover-up, it’s a riveting watch that is both thrilling and simply horrifying.

We spoke to Fogel ahead of the film’s premiere about the making of the movie, how he crafted the story to play like a blockbuster thriller and his reaction to the recent news surrounding Khashoggi’s murder. 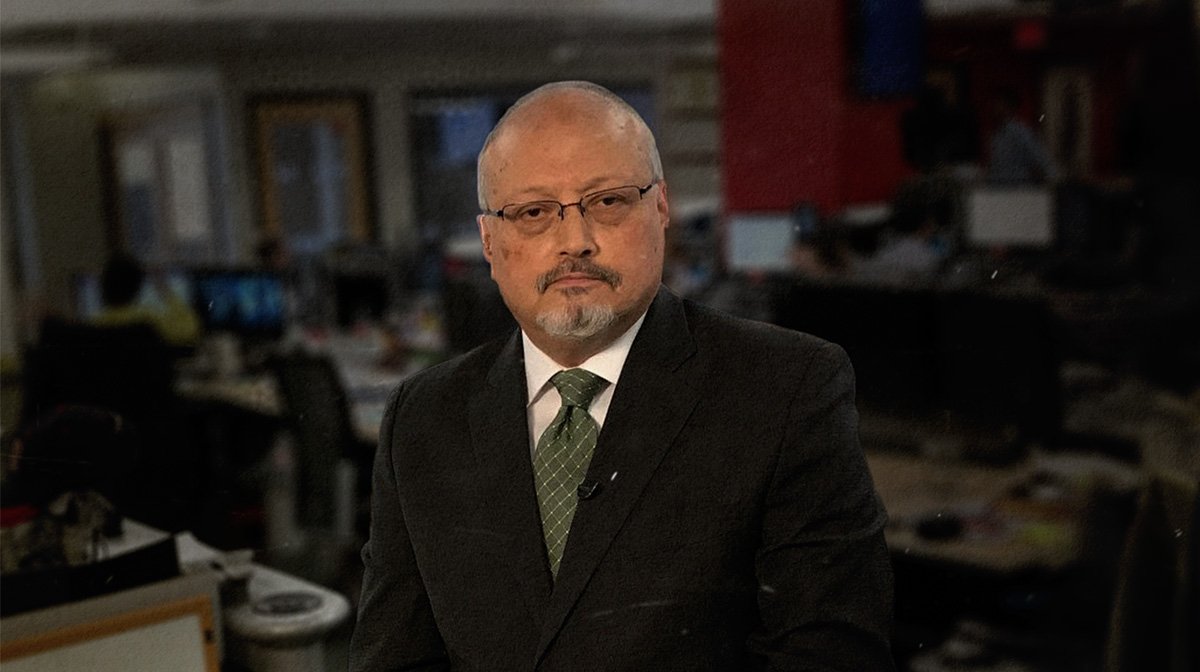 Zavvi: Congratulations on the film, it really is outstanding. Whilst watching it last week I actually got a push notification on my phone about the declassification of the intelligence report, which has been in the news ever since. What’s your reaction to the report?

Bryan: Having worked on this project, becoming personally invested in the lives of Jamal’s fiancee Hatice Cengiz, Omar Abdulaziz and others, I was personally very optimistic that the Biden administration would keep its word. On his campaign trail and over the years he’s said he wants to reexamine US and Saudi relations. You know, he’s even used the hashtag #JusticeForJamal.

Whilst they released this intelligence report which shows what we already knew, that Mohammed bin Salman ordered this murder, the idea that there will be no actions or sanctions taken speaks to the global political world that we find ourselves in. Shockingly and sadly an atrocity like this can be gotten away with if you have enough money and power. That seems to be the case and the Biden administration’s response is surprising. 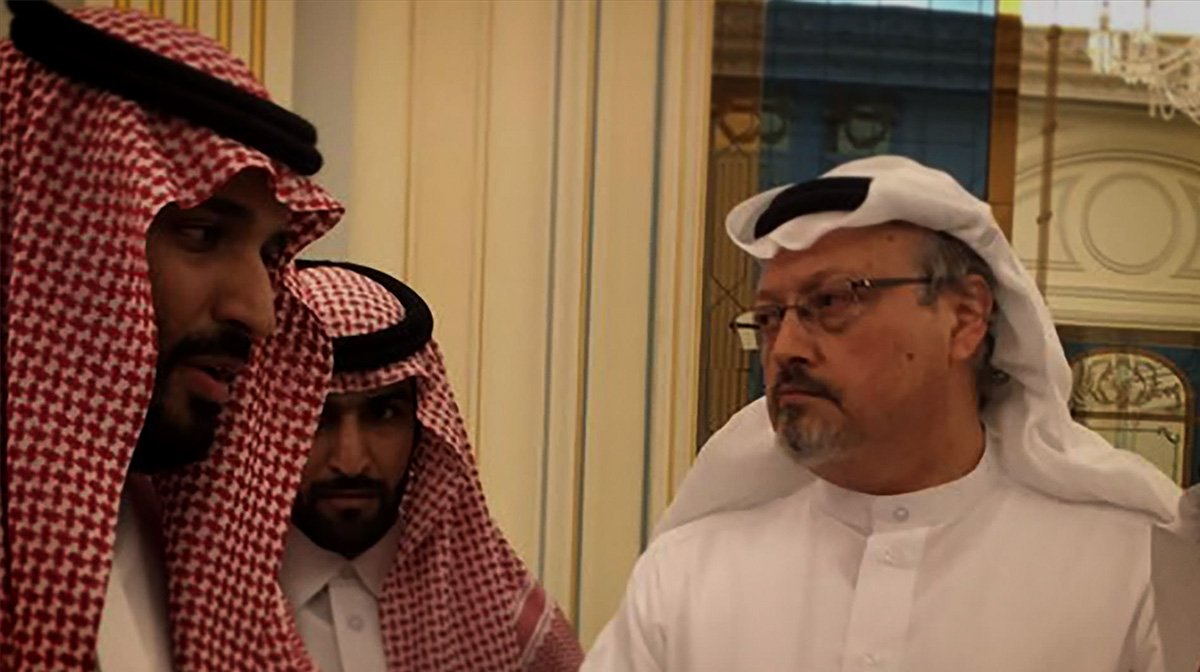 Zavvi: It’s my understanding you waited until the Biden administration came in to release the movie. Was your hope that the impact of it may have been different than if it was released during the Trump administration then?

Bryan: COVID aside I was optimistic in holding the film for release, that as Biden is now in office the film could have a bigger impact because under the Trump administration nothing was going to happen. But this new administration, when it comes to actions, they are following the Trump playbook.

Zavvi: It’s quite a scary watch. Not just the assassination itself, but for example the way social media is used and Jeff Bezos’ phone was also hacked. That alone is mind-blowing to me.

Bryan: It speaks to the world we are all living in, one in which our privacy is no longer taken for granted, our freedom of speech is something to be applauded rather than a given right, and that huge corporate interest and government dealings are going to take precedence over human rights abuses. This isn’t really shocking as this is a world where there’s not a lot anybody can do about it. 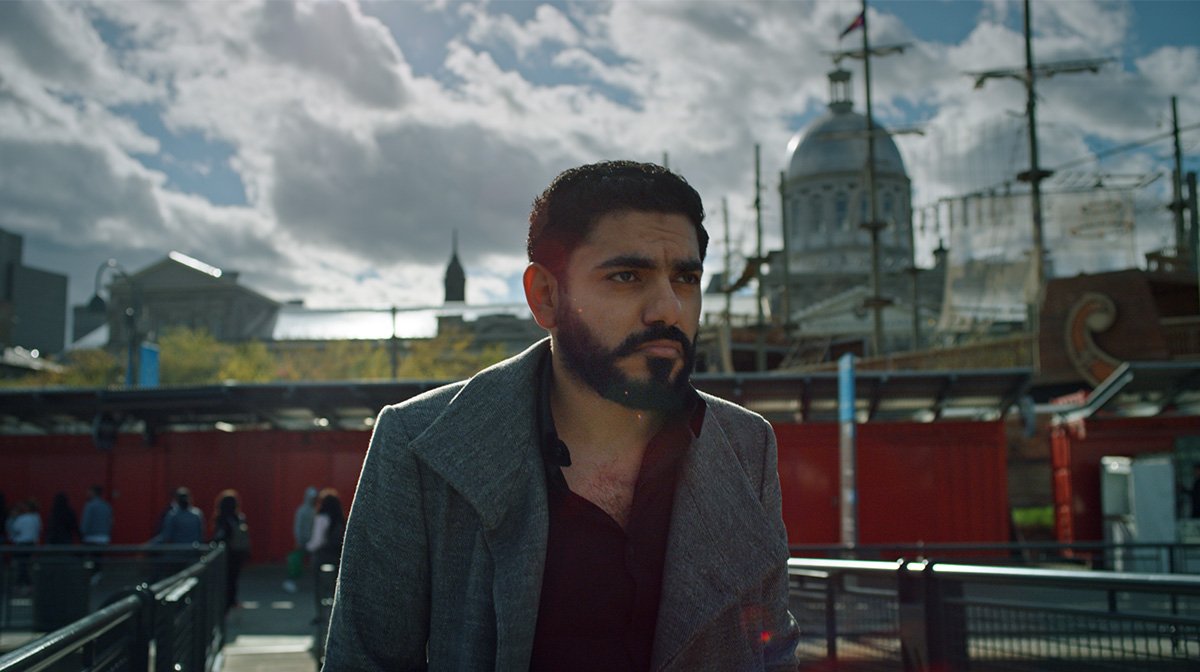 Is Germany going to war with Russia over the poisoning of Alexei Navalny? No. Is the UK going to sever ties with Russia because of this? No. The country has too much power, too much money and authority on the world stage. And as this becomes more prevalent, I think we will continue to see shocking crimes like the murder of Jamal Khashoggi because these governments are further understanding that not only can they commit these crimes, but they can get away with it.

Zavvi: There’s a scene where we see Omar on the subway receiving death threats. Was there a moment you became worried about either your own safety, or the safety of someone else involved in the movie?

Bryan: As we began to shoot with Omar, we understood this is someone under threat but also under protection. The film starts in Canada where he was living at the time, he was in a hotel under the protection of Canada due to daily threats on his life. In the hotel they could control the environment and better hide him.

Whilst we have that scene on the subway which happened in real time, Omar was receiving messages like that on a daily basis and still does. There wasn’t a moment where we went ‘oh we better stop’, we were starting under knowledge of this. 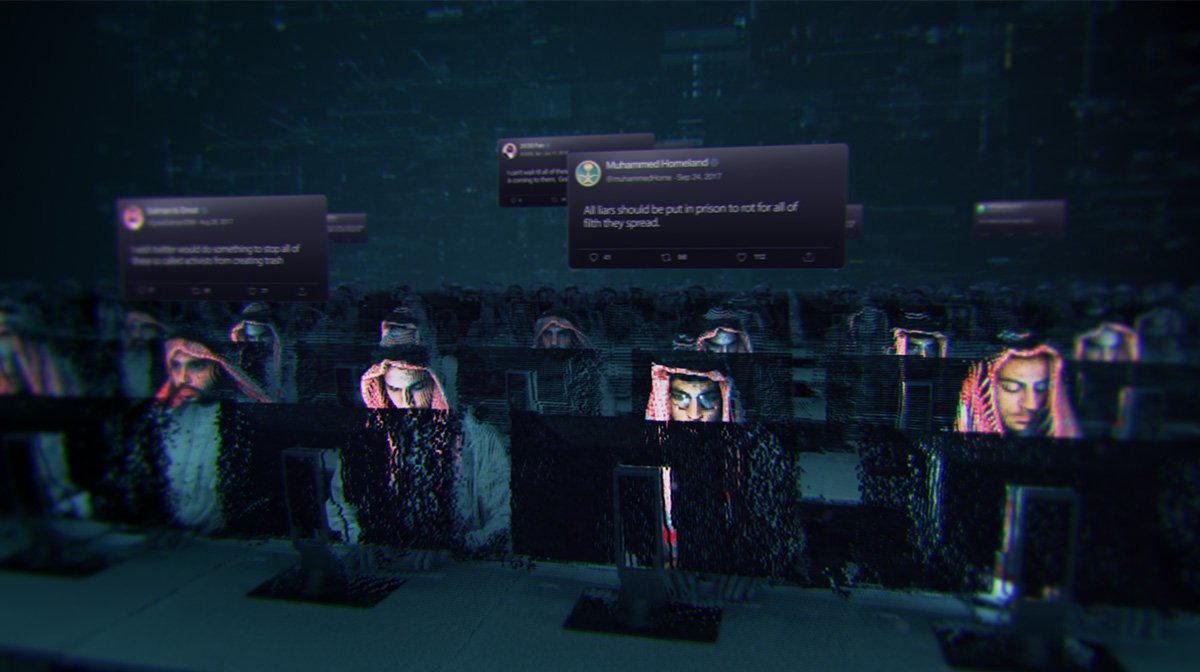 Zavvi: I read online that you took security measures, with a focus on cybersecurity during the production.

Bryan: You can only do so much. In the film we get into Pegasus, the Israeli cyber-hacking software which has been sold to governments around the world. In the case of Saudi Arabia, this software has been used for nefarious purposes, gaining intelligence on dissidents.

So making the film, we were doing our best to work offline, keep the edit offline, have our devices checked, use burner phones, not go onto cellular networks – protocols cybersecurity experts told us to follow. But as you see in the film, if you can hack the phone of Jeff Bezos, who can’t you get? That’s just the era of technology that we are living in. 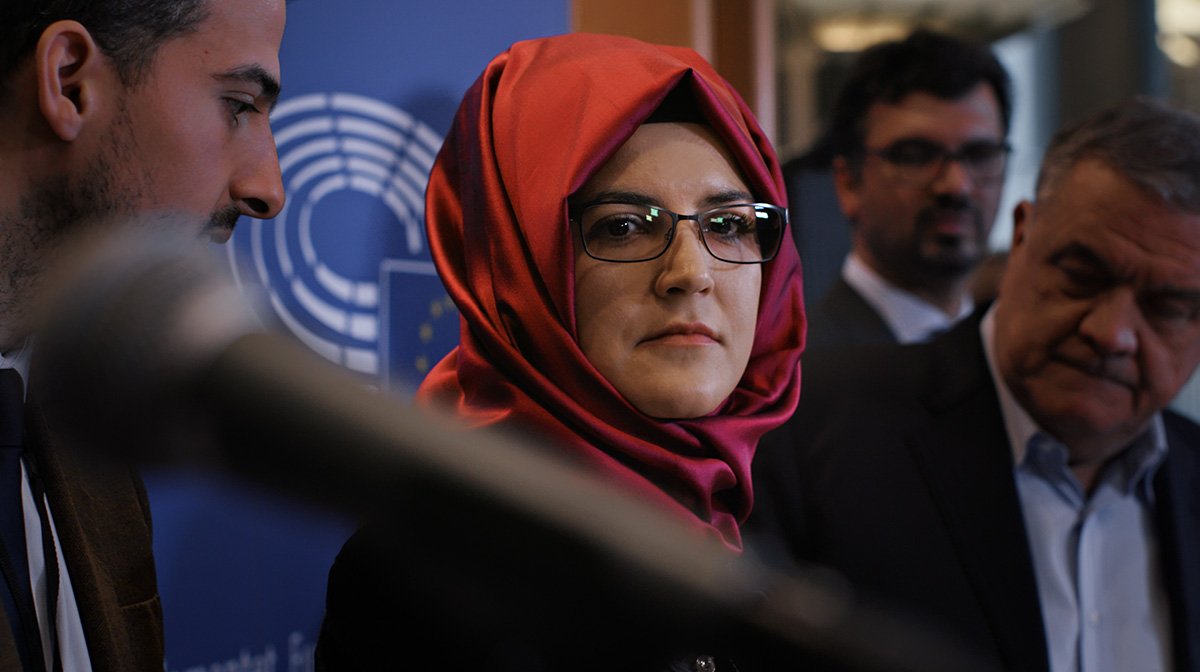 Zavvi: One thing that stood out to me was the way you crafted this story. It was told as a thriller, which so happened to be a documentary which made it even more enthralling.

Bryan: It was a very intentional approach. I worked with mostly the same collaborators from Icarus and from the outset looking at this story, it checked all the boxes of a thriller. Of a film like The Bourne Identity, a story which is scary, timely and emotional.

The events that have happened and are still happening in Omar’s life, in Hatice’s life and certainly in the murder of Jamal, not to be cliche but its like the pages of a John Le Carre novel.

We felt that if we could craft a piece of cinema that played as a thriller, that audiences could have a more visceral and emotional response to the story, and that response leads to not only remembering the film for a long time to come, but that it also serves as a call to action. 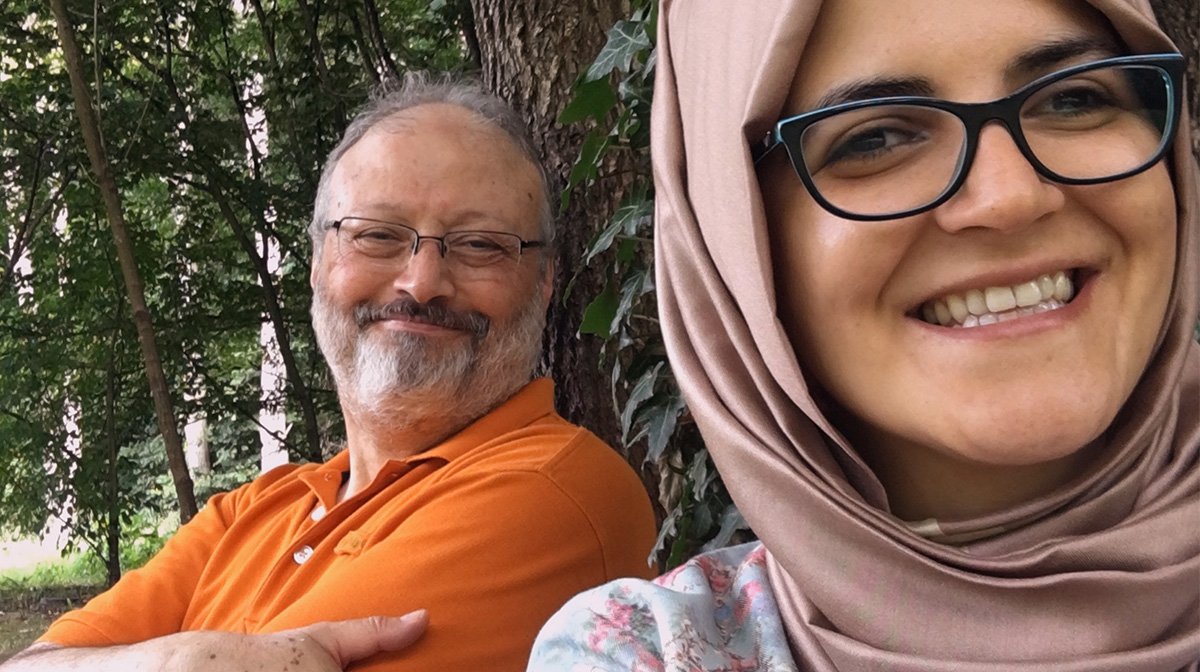 The techniques that we were employing were very purposeful in wanting to engage an audience, whether it be a big score, sound design done at Skywalker Sound, or working with 200 animators on CGI.

We wanted to take a ‘documentary’ and elevate it in its craft to have an emotional resonance. Hopefully people who see the film will be riveted and enraptured, but also come away with an emotional connection wanting to not only raise their voice, but also fight for justice for Jamal and for spectacular injustices which are happening to so many people in Saudi Arabia.