Are you the type of anime fan who prefers ghouls and monsters over superheroes and mechas? Allow us to give you our recommendations for the best horror anime shows.

As anime continues to attract a broader audience, it becomes increasingly necessary to tailor content to people of different tastes. Thankfully, this is something that it is well known for.

However, the problem is that there can often be too much choice, and if you’re not actively involved in the community, this can be very overwhelming. 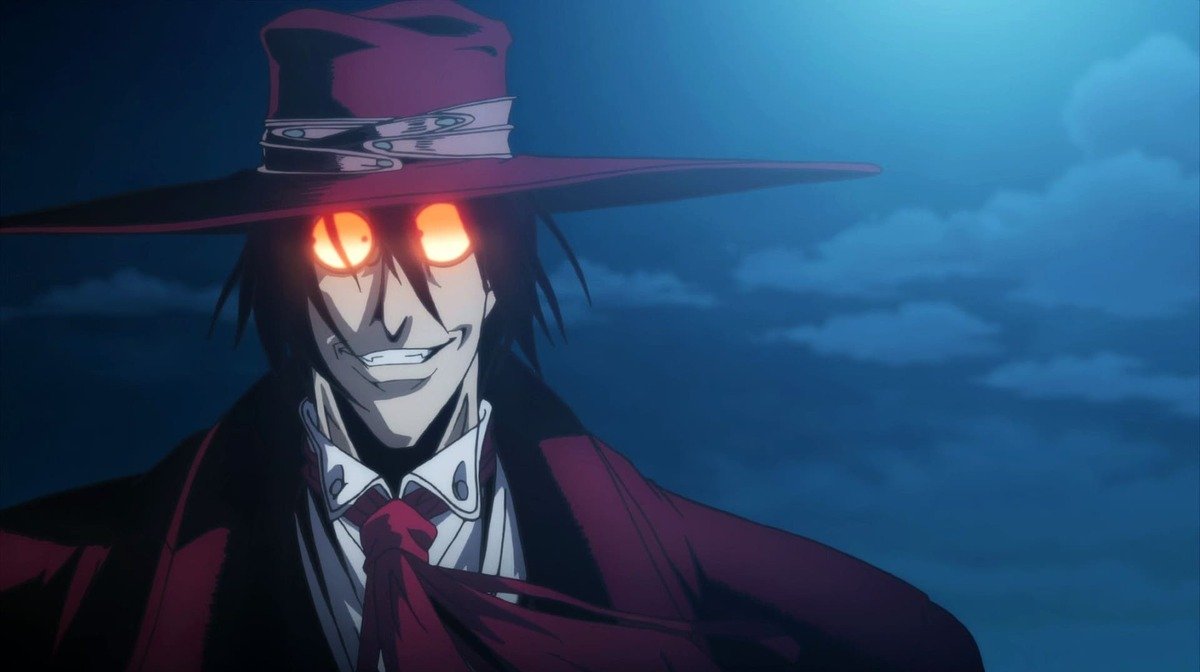 Based on the manga series by Kouta Hirano, Hellsing Ultimate (2006–2012) is the second TV adaptation of the source material, but it differs in that the plot takes fewer deviations from the established continuity.

What makes Hellsing Ultimate so appealing for horror fans is its stylised depiction of traditional supernatural mythology, namely that concerning Dracula.

The protagonist of the series, Alucard (voiced by Jōji Nakata and Crispin Freeman), does not resemble the character as he appears in Bram Stoker’s classic novel, instead dressing in a crimson-red outfit and accessorising with orange-tinted sunglasses. Oh, did we forget to mention the pistol?

Despite these transgressions, there’s no denying that Alucard is a vampire, even if he reserves his monstrous abilities for others of his kind. His teeth are sharp, his appetite for blood unquenchable, and he has a penchant for shapeshifting. What more could you want from a horror anime? 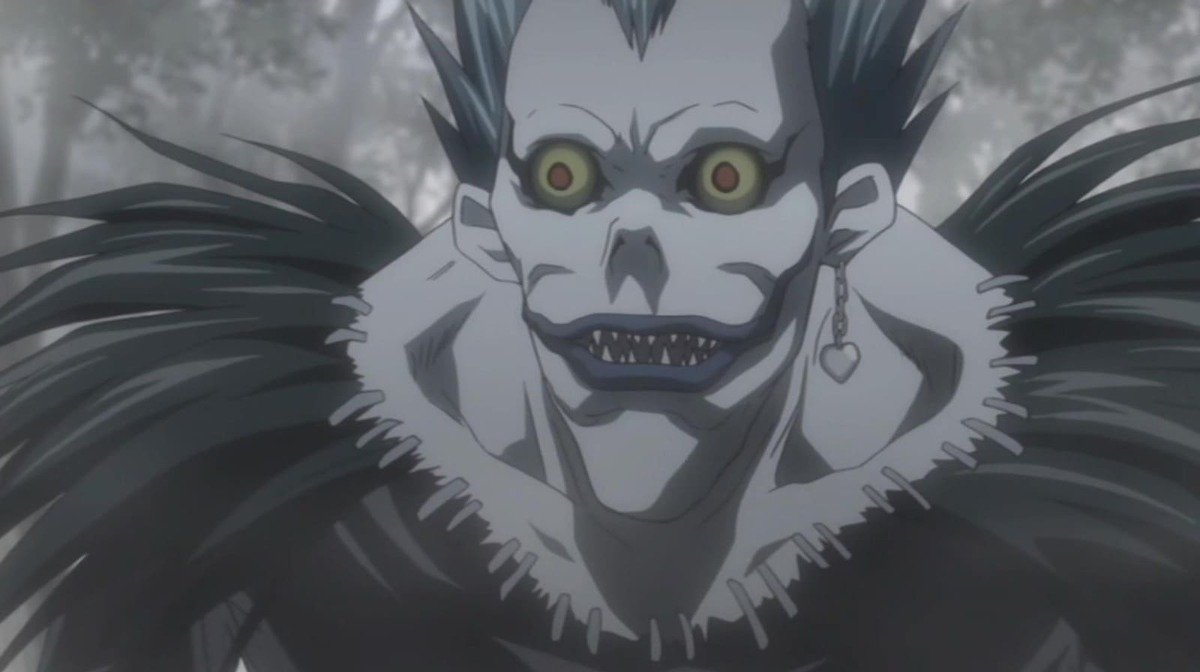 If you were to ask someone unfamiliar with anime what the most terrifying aspect of Death Note (2006–2007) is, they would likely point to Ryuk (Shidou Nakamura and Brian Drummond), the unsightly Shinigami (a supernatural spirit in Japanese culture) who sets into motion the events of the series.

However, we would argue that is not the case, as Ryuk is — for the most part — a passive observer, allowing the show’s ‘hero’, Light (Mamoru Miyano and Brad Swaile), to do as he pleases.

You see, Death Note shows the cruelty of humans, not monsters. Light harnesses the power of the Death Note, which can end the life of anyone by the owner knowing their face and writing down their name, and though he initially targets criminals, he shows himself willing to take action against anyone he sees as a threat, including the detective L (Kappei Yamaguchi and Alessandro Juliani). 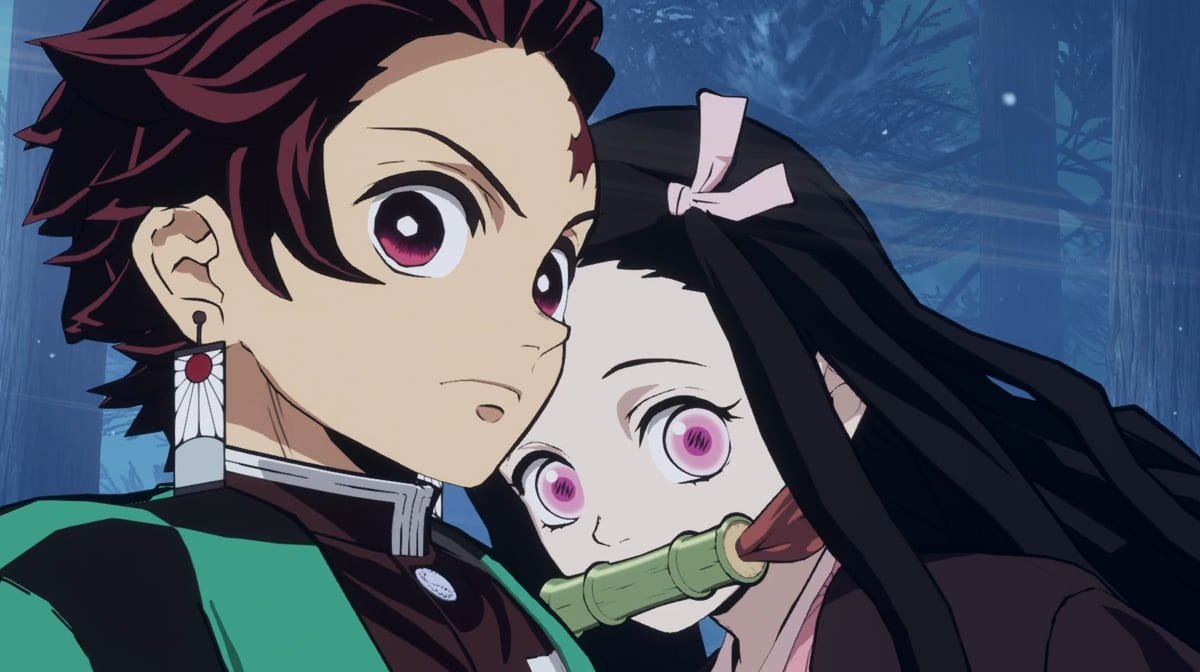 In terms of thematic relevancy, it should come as no surprise that Demon Slayer: Kimetsu No Yaiba (2019) has made it onto this list. The show thrives on horror, sparing nobody from the violence of the titular demonic entities, not even children.

This tendency towards gore is apparent from the onset, with protagonist Tanjiro Kamado (Natsuki Hanae and Zach Aguilar) suffering the deaths of his entire family except for his sister, Nezuko (Akari Kito and Abby Trott), who survives but is transformed into a demon, albeit one with human qualities.

These traumatic events lead to Tanjiro joining the Demon Slayer Corps, whose skills he adopts to take revenge against the beings that killed his family and to find a cure for Nezuko. 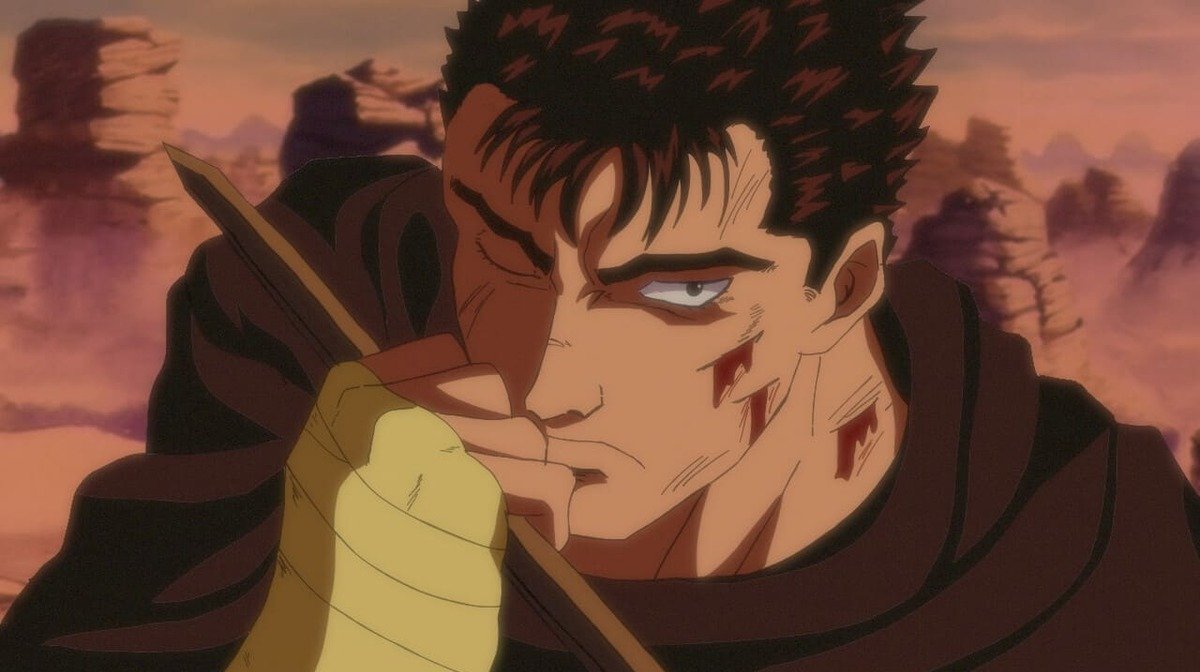 When it comes to Berserk, there are two anime shows to choose from. The one that we are recommending, however, is that which debuted in 1997.

Why? The simplest answer is that it is a straight-forward introduction to the world and its characters, whereas the 2016 anime is a continuation, requiring that you have prior knowledge of the events leading up to and including the ‘Golden Age Arc’ of the original manga by Kentaro Miura.

Now that we’ve established the logical reasoning for starting with the 1997 adaptation of Berserk, we can discuss the connection to horror. Many would be sceptical to place the series into this category, but we imagine that most would still acknowledge the rationale.

The narrative is littered with bone-chilling imagery, such as demons and body mutilation, and we definitely don’t recommend it if you’re squeamish. 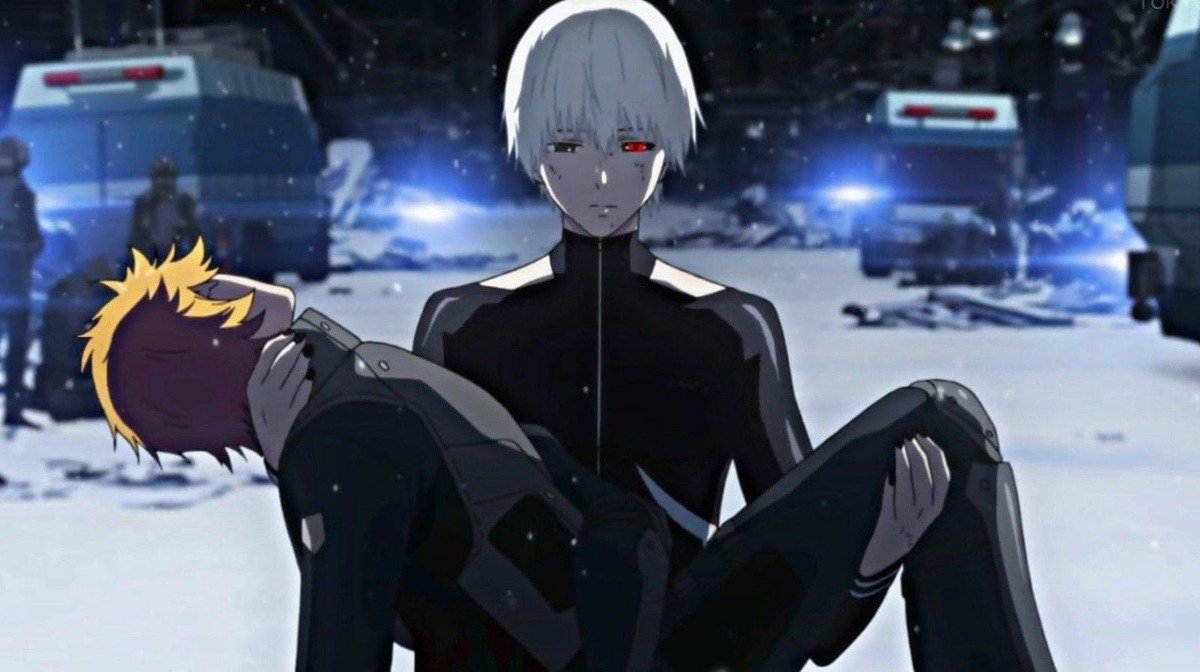 The scariest monsters are the ones that you don’t see coming, and this is the premise of Tokyo Ghoul (2014–2015). Following ordinary student Ken Kaneki (Natsuki Hanae and Austin Tindle), we see how he is assaulted by his date, Rize Kamishiro (Kana Hanazawa and Monica Rial), who — for all intents and purposes — appears to be nothing more than a human girl.

Ken ultimately escapes the clutches of his flesh-hungry attacker, but that is not to say that he is unharmed. His injuries are severe, and the only way to save him involves transferring the organs of Rize into his body, which transforms him into a half-ghoul.

His life forever changed, Ken must learn to adapt to the lifestyle of a ghoul, lest his true nature be uncovered. 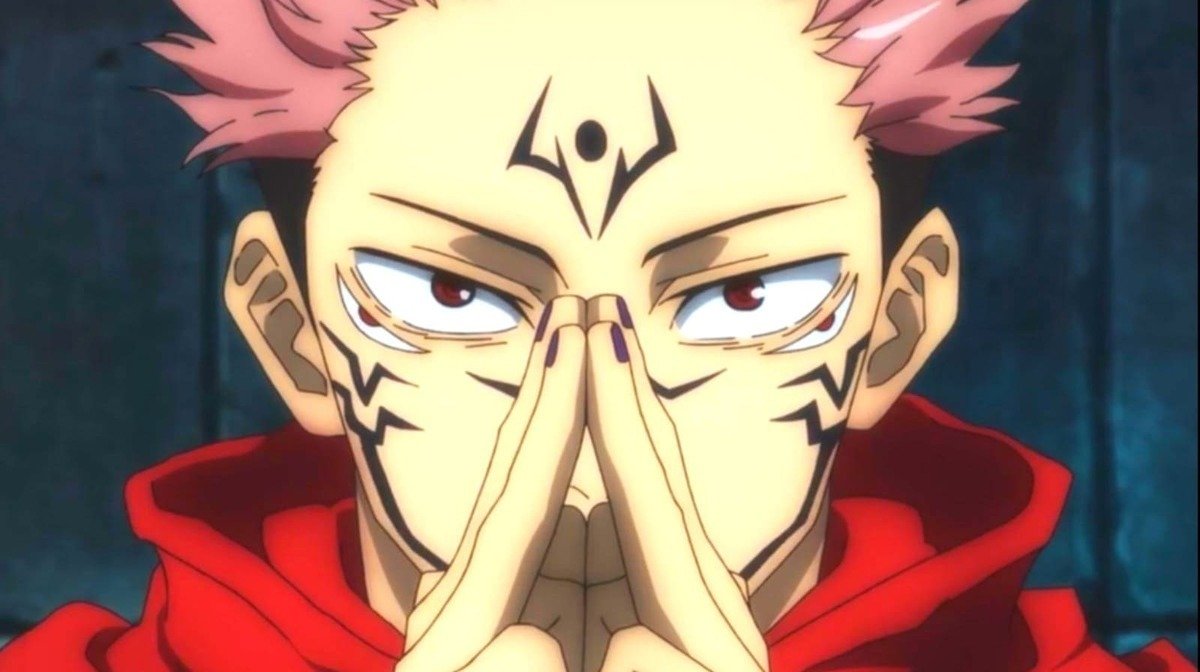 As one would expect, the consequences of being inhabited by something described as a Curse are less than pleasant, but Yuji somehow manages to retain control over himself. Sounds rosy, right?

Not exactly. The sorcerers of the Tokyo Prefectural Jujutsu High School seize the opportunity to be rid of Sukuna for good, and for this to happen, Yuji must consume — yes, consume — all of the entity’s fingers. If that’s not horrific, we don’t know what is. 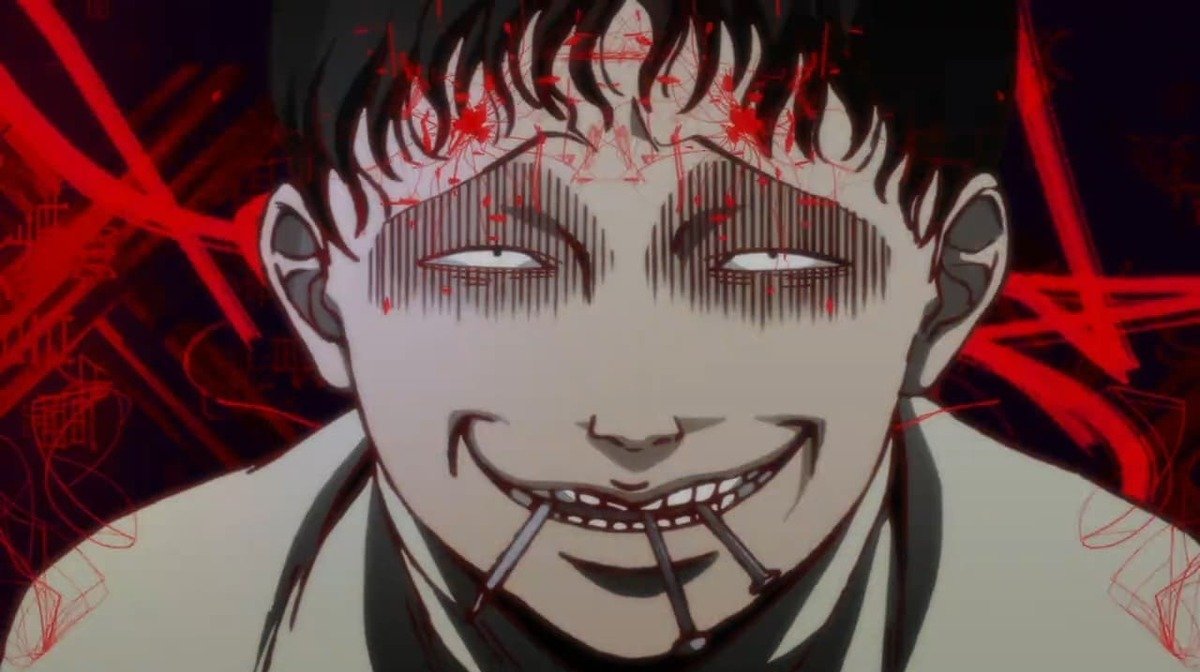 The works of critically acclaimed horror mangaka Junji Ito are respected by fans all over the world, and that’s why it’s a big deal that some of his stories have been translated to the form of anime.

Presented as an anthology series, the Junji Ito Collection (2018) comprises 12 episodes and two OVAs, which include classic tales such as Slug Girl and Tomie. These encapsulate the creepy feeling present throughout the manga, adding another layer with its musical score. 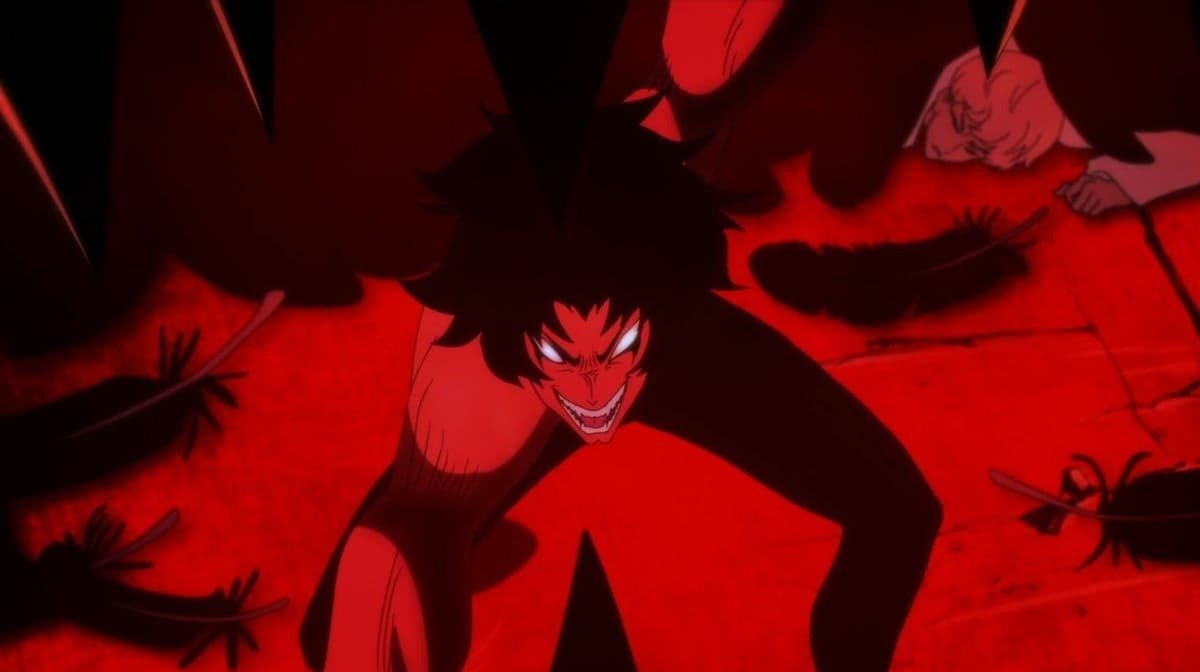 Unlike many of the entries on our list of the best horror anime shows, Devilman Crybaby (2018) does not immediately invoke that feeling of dread, no doubt because of its oxymoronic title.

Nevertheless, we should warn you that the TV series takes full advantage of its platform, not being restricted by the demographic of the source material which is predominantly young boys.

As the narrative’s heroes, Akira Fudo (Kōki Uchiyama and Griffin Burns) and Ryo Asuka (Ayumu Murase and Kyle McCarley), fight back the horde of demons, they unleash torrents of blood, bolstered by having access to their enemies’ powers, which turn Akira into the eponymous Devilman. 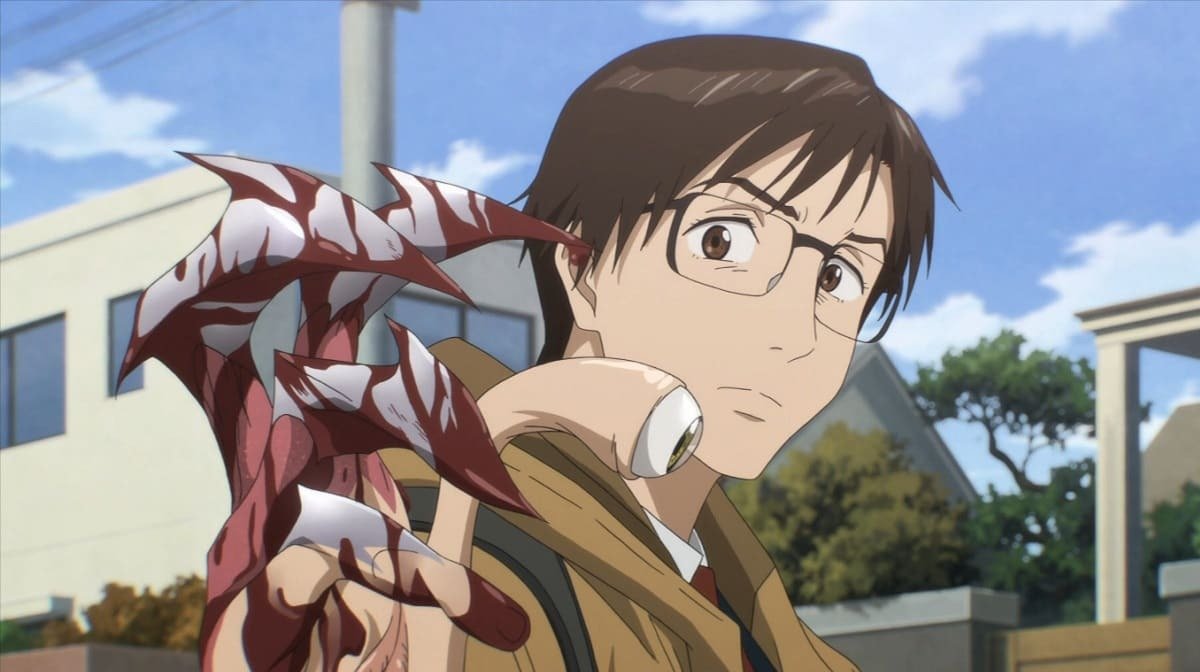 With a concept that is as weird as it is terrifying, Parasyte: The Maxim (2014–2015) presents a rather disturbing question: what if an alien parasite bonded with your right arm?

Fortunately for us, it’s unlikely that we’ll ever have to deal with such a circumstance, but 17-year-old Shinichi Izumi (Nobunaga Shimazaki and Adam Gibbs) is not so blessed.

When the worm-like Parasites arrive on Earth, they attempt to burrow into people’s minds, using ears and noses as their primary entry points. However, this all goes wrong for one Parasite (Aya Hirano and Brittney Karbowski), the unusual creature finding itself in control of Shinichi’s right hand.

Forced to work together, the human and the Parasite (nicknamed Migi) fight against the invaders, and throughout their journey, they even start to develop a bond. 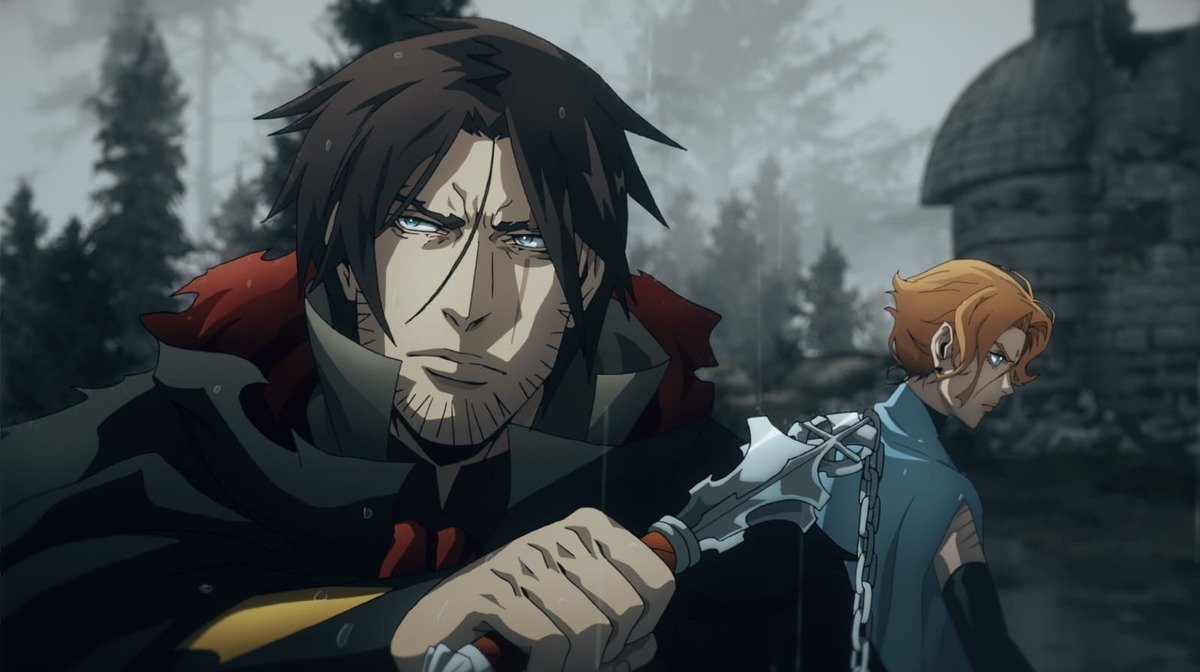 Though we won’t deny that Castlevania (2017–2021) is perhaps a controversial addition to our list of the best horror anime shows, the series being a western production, we think that it is a great way to journey into the darker corners of animation if you’re new to it.

The style very much resembles that of traditional anime, but the story beats are more accessible to someone not used to the overdramatisation and monologuing frequently observed in the medium.

Continue your exploration of the horror genre with Zavvi UK’s wide range of anime merchandise.