I was an ignorant child. I looked down on what I deemed to be “old” horror films and instead focused on newer releases to seem more in the know.

Well, in that ignorance I doomed myself to large gaps in my genre knowledge, particularly regarding the slasher franchises of the 1980’s. I had never cared about Freddy Krueger or Michael Myers beyond their first films. I just assumed that the sequels were bad and not worth my time.

But, as I’ve grown up and spent more time learning about the genre through both reading and the amazing relationships I’ve built in the horror community, I realised it was time to close some of those knowledge gaps.

So, I purchased the complete set of A Nightmare On Elm Street films and took the plunge into the nightmarish world of Freddy Krueger. 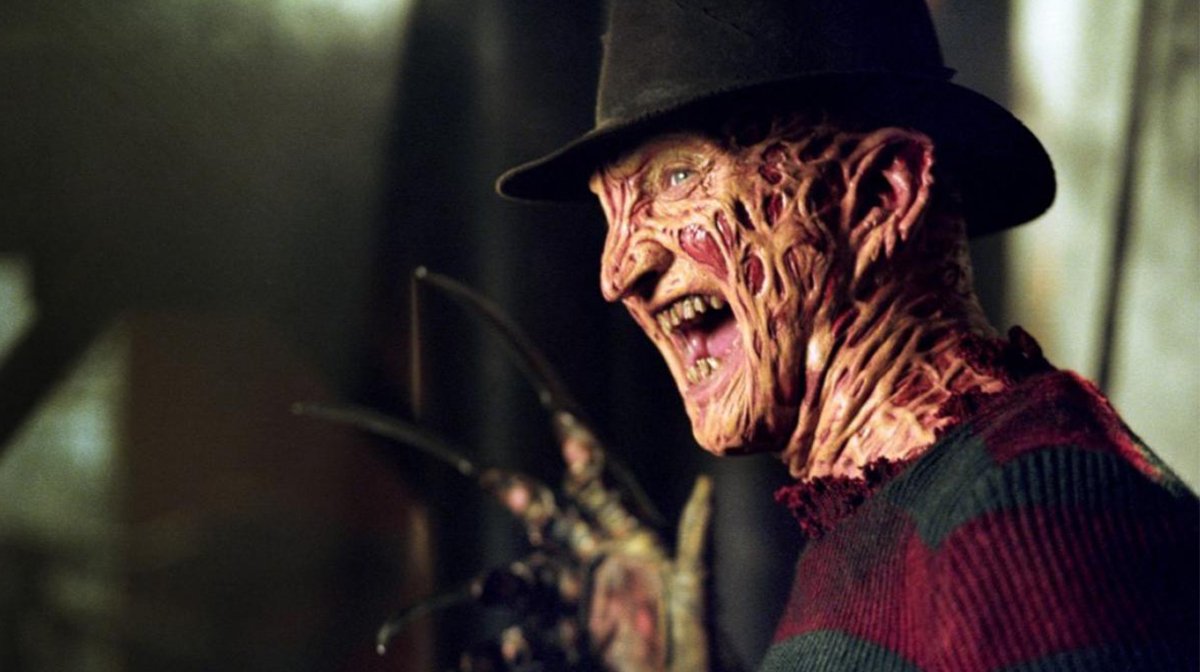 To get my overall impression out of the way, I absolutely adored these films and am almost mad at myself for waiting so long to dive into them.

Wes Craven’s first installment of the franchise is iconic and a horror classic, but the rest of the films deserve just as much applause for their creativity, their campness, and how they are not just vehicles for Freddy; they care about their characters and their own individual traumas. 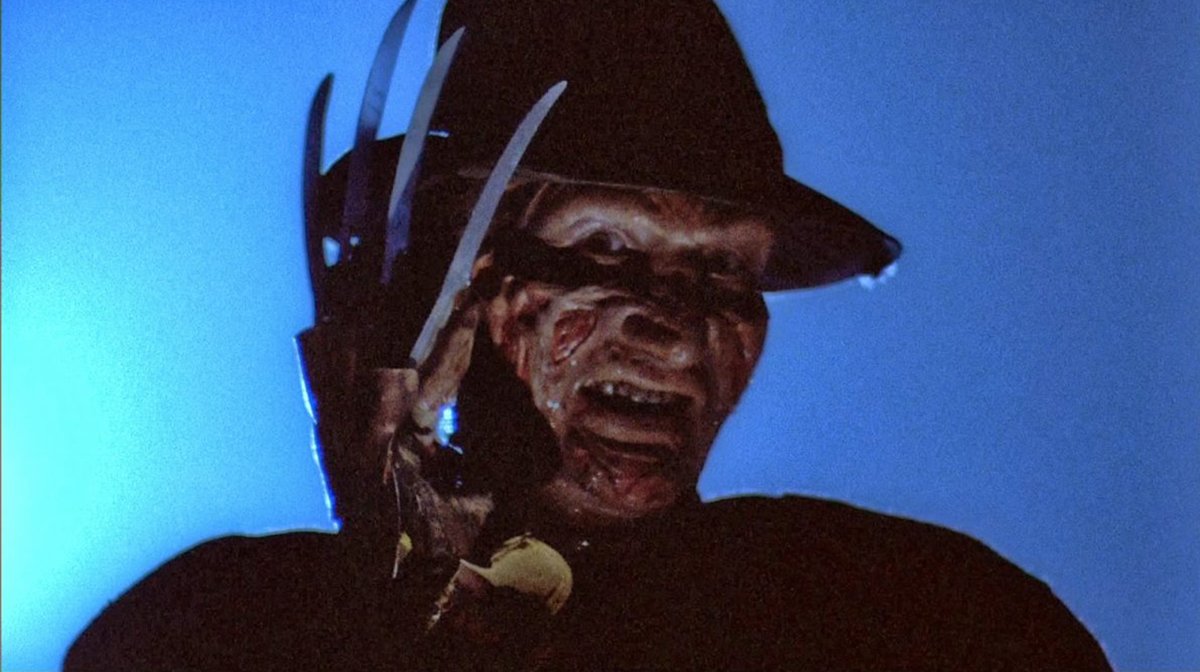 The entire A Nightmare On Elm Street franchise is about trauma, particularly acknowledging and fighting it.

For many trauma survivors, flashbacks and triggers occur in their dreams. Even in their sleep, people with PTSD cannot escape their past, their subconscious bringing forth their worst memories for reasons unknown.

This series plays with that very real experience, making its premise all the more frightening to those of us who suffer from never ending nightmares. 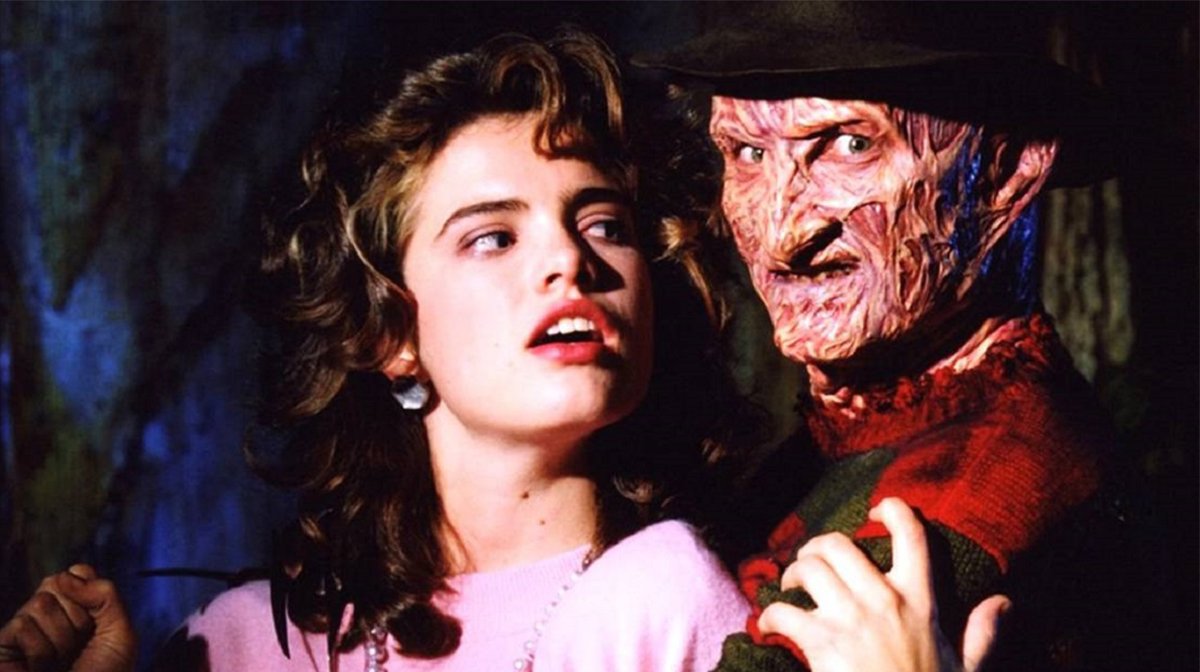 In the first film, the teenagers of Elm Street are specifically dealing with inherited trauma from their parents, who killed Freddy Krueger in a fit of rage.

Now, the scarred, knife-wielding killer is stalking those kids for revenge, using their darkest fears that lurk in their subconscious.

This inherited drama damns Nancy and her friends to an inescapable fate, which is terrifying to watch unfold. It is not just Freddy or their nightmares that are terrifying; it is the slow unraveling that comes from days without sleep. 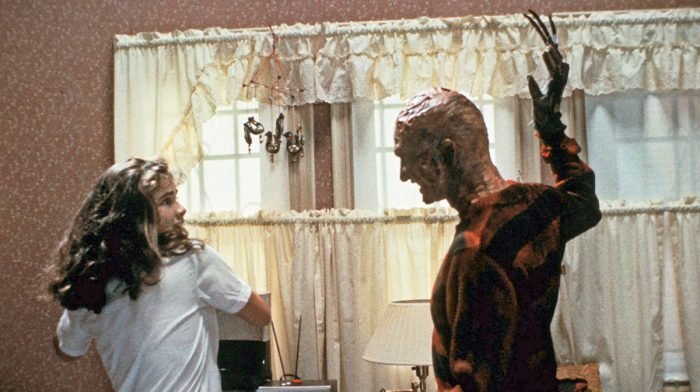 As the franchise progresses, it expands to more than just confronting the wrongs of our parents. In A Night On Elm Street 3: Dream Warriors, all of the teens live in a psych ward and struggle with sleep disorders. They are deemed “crazy” or “unstable” and are kept locked away to deal with their demons through strict medication schedules and group therapy.

This is why their shared dream experiences with Krueger are discounted by doctors; these kids are “crazy” after all. It’s what Krueger preys on, their insecurities and fears, knowing that no one will believe them. Plus, in their fragile state, they can be more easily manipulated and murdered.

The standout moment is when he is facing off with Taryn, who transforms into a switchblade-wielding punk in her dreams. Despite her tough appearance, Krueger knows her weakness: her heroin addiction. His knived fingers transform into needles and pierce her screaming track marks. Taryn’s own experience with addiction is weaponised by Freddy, rendering this tough punk into nothing by using her greatest fear. 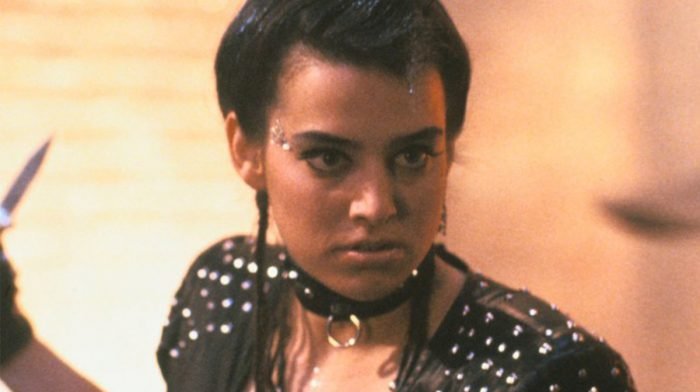 This examination of trauma gets meta in A Nightmare On Elm Street 7: New Nightmare. Craven returns to direct the story of Heather Langenkamp, who played Nancy in the first and third films, and how she, the “real” person, becomes haunted by Freddy.

No longer are these the traumas of a fictionalised teenager, but of a real person who has weathered years of abusive fans and stalkers.

In his first horror meta narrative before Scream, Craven is interrogating the very tropes he created with Krueger, while also examining the real trauma that occurs through being in the public eye.

From beginning to end, this is a franchise that first and foremost wants to investigate the human psyche and what lurks in its darkest corners. No matter the ridiculous death or catchy one-liner, that story of trauma is never lost. 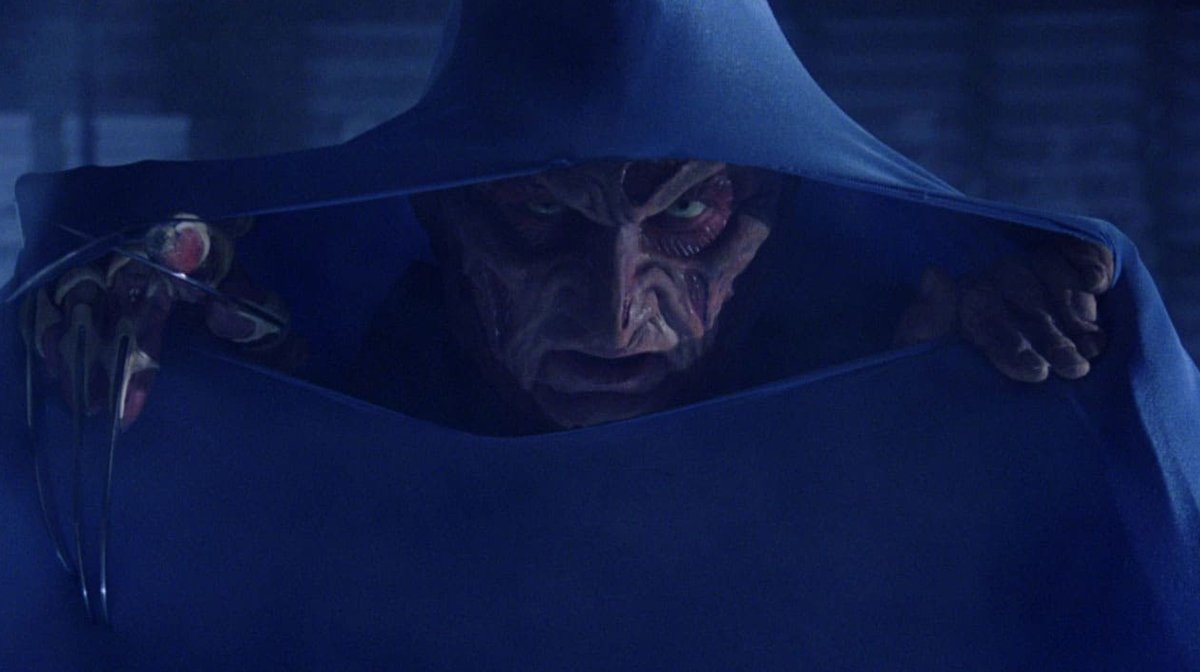 With a focus on trauma, this lets each of the films in the franchise analyse their characters, not just Freddy.

Unlike other franchises that become merely vehicles for the murder of vapid teens at the hands of the villain, Freddy serves as more of a backdrop than a focus.

He becomes the vehicle for character development as each protagonist finds their strength in confronting his nightmarish presence. 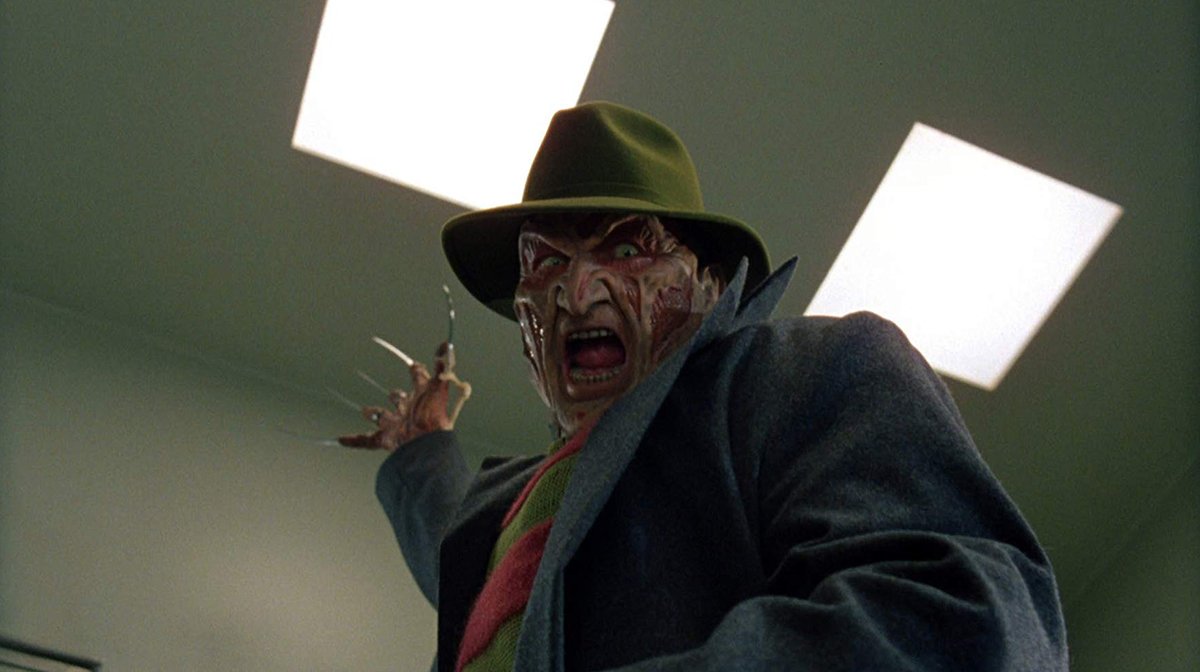 A Nightmare On Elm Street 2: Freddy’s Revenge is the first and only film of the series to feature a Final Boy, an inversion of the Final Girl trope. There is no screaming young girl, covered in blood at the sight of her dead friends. Instead, there is Jesse, a teenage boy who is plagued by Freddy.

The film works to not only torture Jesse, but to show how much he is struggling both with moving to a new town and with his own identity.

The queer undertones of the movie also lend to the idea that Jesse is grappling with his sexual identity, despite his desire to be the all-American boy.

He is plagued by the fear of rejection for who he is, which Freddy so greedily preys on. He becomes a fully realised character that you want to cheer for, rather than against. 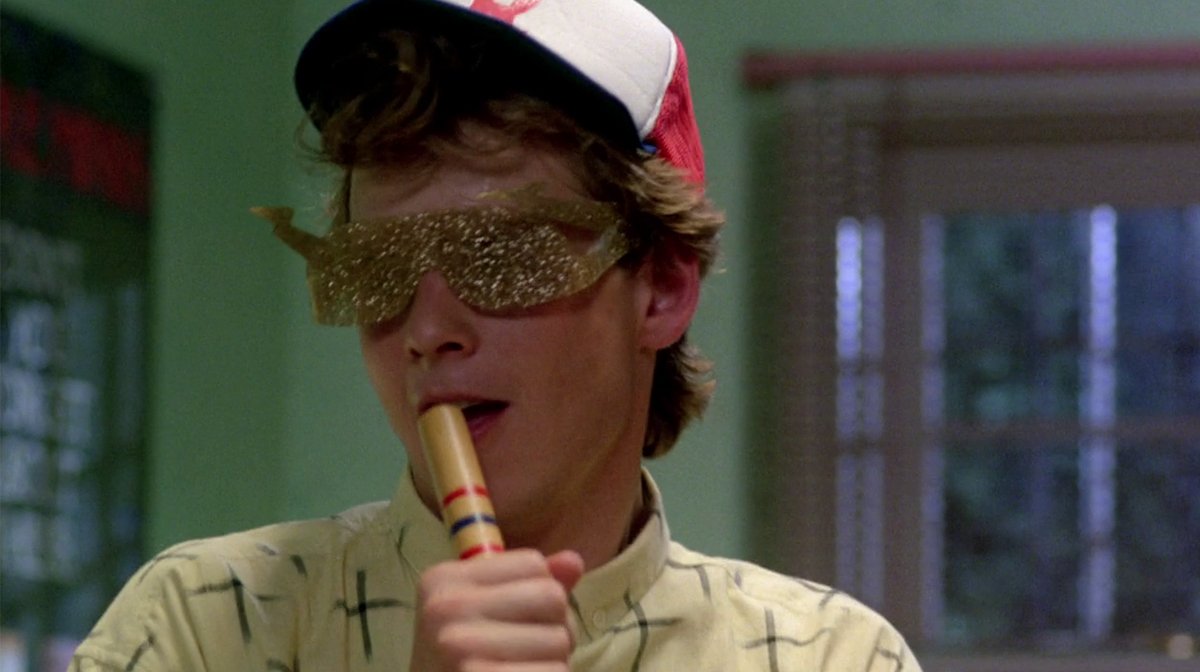 Then there is Alice from A Nightmare On Elm Street 4: Dream Master. She begins the film as a timid young woman who imagines letting out her rage, but really just takes constant abuse from her alcoholic father and the rude kids at school.

She wants to be as small as possible and she reduces herself to a weakling, but that is because that is what she is being told to believe; she is forced to see herself as such.

But as she begins fighting Freddy, Alice starts a transformation. With each death, Alice gains power, slowly realising her own strength and ability to fight back. She becomes an amalgamation of strengths, each inspired by a lost friend.

The entire film is her journey to recognise her own potential and harness that newfound power to defeat her demons. 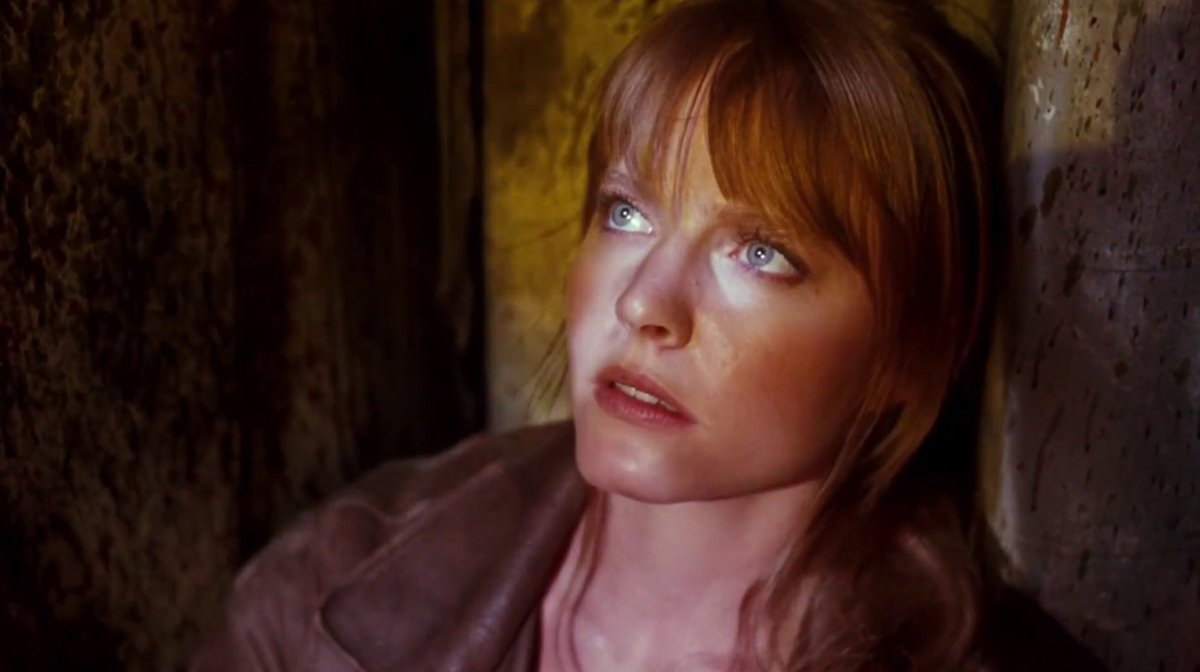 With this examination of trauma comes absolutely gnarly kills. If there is one consistency to point to in all seven films, it is their creativity when it comes to murder.

Freddy’s dream domain becomes even more of an advantage because in our dreams, anything is possible. Directors and writers are not limited to what is possible in the real world; instead, they can dream up nightmarish scenarios where bodies bend, crack, and transform into unrecognisable forms. 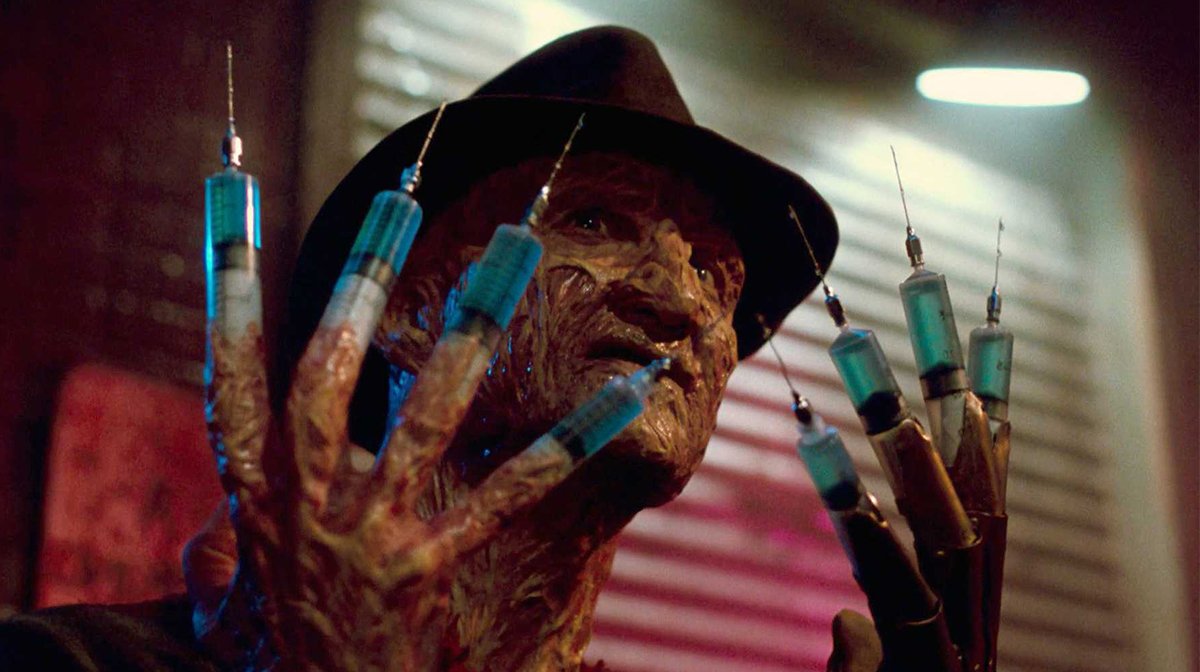 In what I believe is the nastiest death of the franchise, Dream Warriors character Debbie is turned into her biggest fear: a cockroach.

Her arms snap and bend to become long bug legs and as she screams at the transformation, she falls into a human-sized glue trap.

Her face becomes stuck in the viscous substance and her screams are muffled as she tries, in vain, to free herself. Her skin stretches and her face becomes unrecognisable. She is reduced to nothing but a bug, something small that can be easily exterminated.

What is so terrifying is not just her transformation, but the complete removal of her humanity. To Freddy, she is nothing more than vermin. 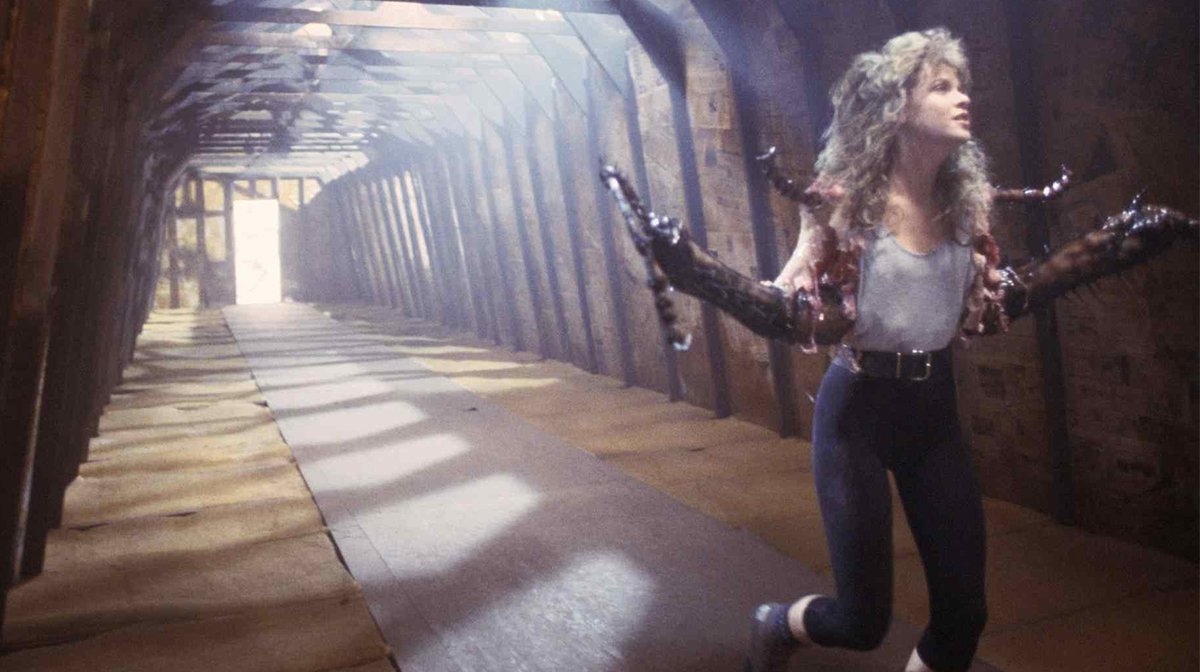 In close second is when Greta eats herself in A Nightmare On Elm Street 5: Dream Child. She is forced to be a model by her mother, which comes with strict diets and an intense beauty regimen.

She loathes her mother for putting her through all of this and at a dinner party, dreams of confronting her mother. But, instead, she is force fed her own organs by Freddy and chokes on her insides.

While this moment is graphic enough, it is even more stomach churning as you reflect on Greta’s relationship with her body. She hates it and hates what she is forced to do with it, so to destroy it, she must consume it.

The frustration that Greta emanates is compounded into agony as even in death, she cannot escape her self image and what it means to have a body. 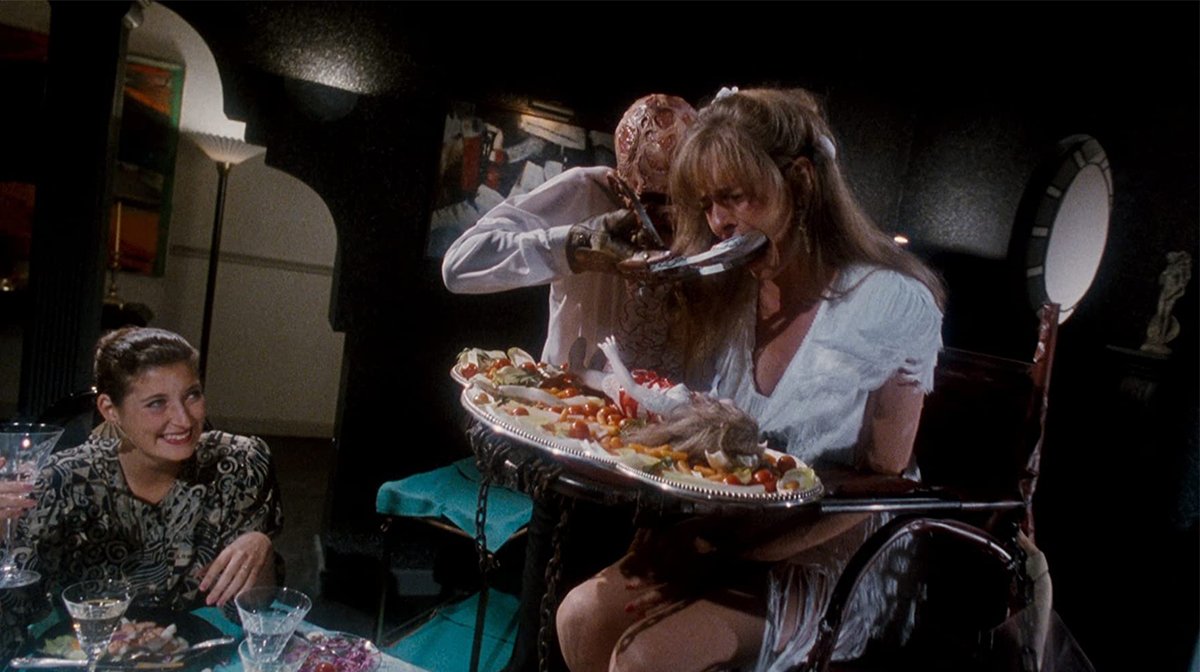 The Evolution Of Freddy

From the very beginning, Freddy is established as a pervert who has a penchant for calling women “bitch” and making lewd comments. He is nasty and he knows it.

But, this nastiness evolves into a camp sensibility which becomes even more noticeable in A Nightmare On Elm Street 5: Dream Child. 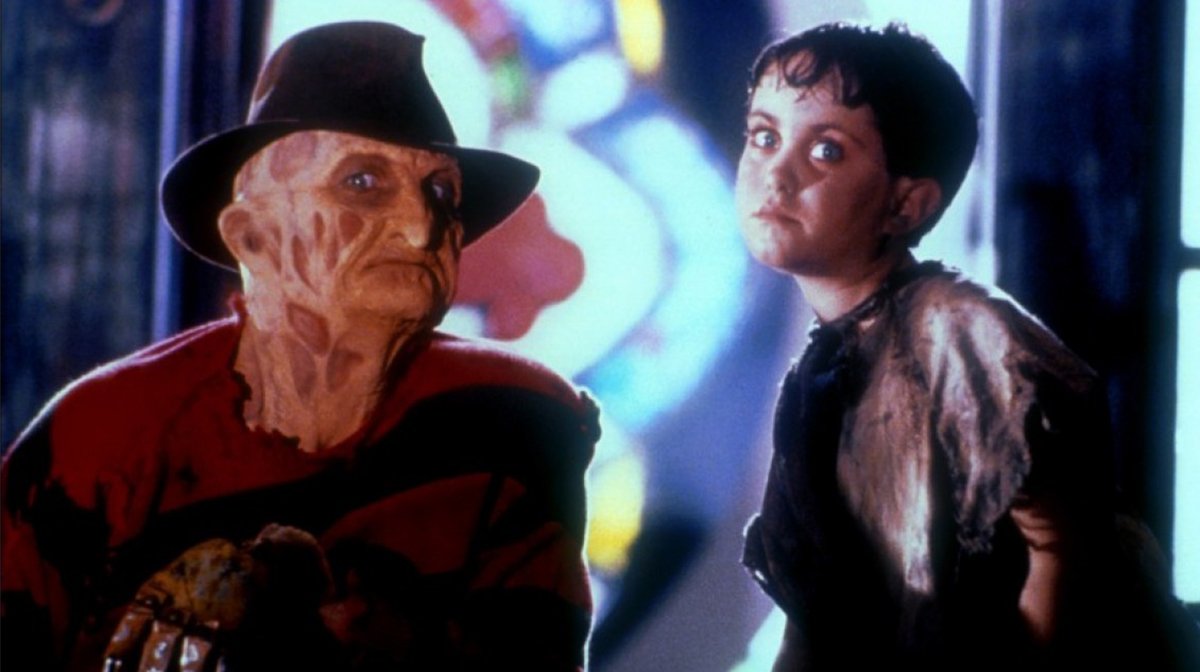 He takes centre stage, wiggling his way across the screen like a haunted noodle, flailing his limbs at petrified kids. This is no longer a series about traumatised teens; this is about the personality of Krueger and how it can be more easily conveyed.

Freddy riding a broomstick like the Wicked Witch Of The West? Sure, why not! Freddy putting on sunglasses at the beach while a girl drowns in sand? Sign me up!

He becomes a parody of himself, a performance of a performance that is poking fun at the villains of the classic slasher film. His quick wit and comedic bits keep him from becoming a Michael Myers or Jason Voorhees; he is in a category of his own that cannot be touched by any machete or butcher knife. 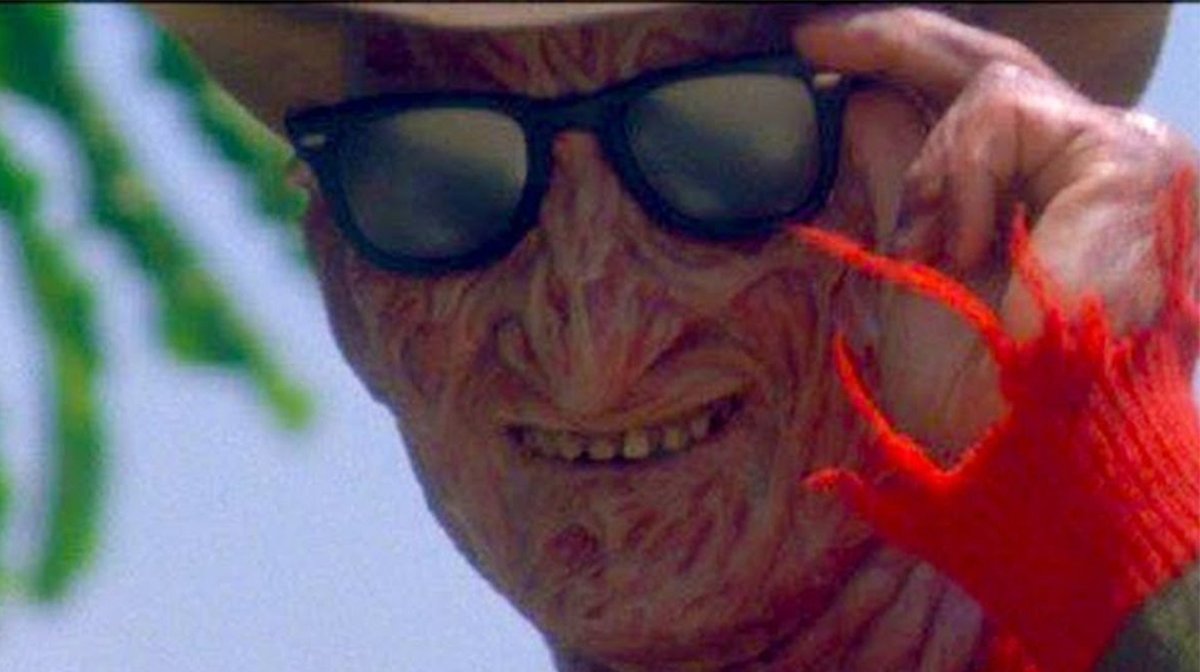 While the fifth and sixth installments of A Nightmare On Elm Street really lean into camp, that doesn’t keep them from faltering in the footsteps of the preceding four films.

The major stumbling block comes in attempting to create more lore for Freddy. Instead of focusing on the characters’ own experiences with the killer, these two films shift to trying to understand Krueger’s tragic history.

But what these movies don’t understand is that there doesn’t need to be lore of Freddy. We know the basics: he was a child killer, adults killed him as an act of vengeance, now he seeks his own revenge.

In trying to build a larger mythos around the character, films five and six lose sight of what makes this franchise so special. Yes, we’d like to see Freddy kill some teens, but we don’t need to know about his mother and his marriage. 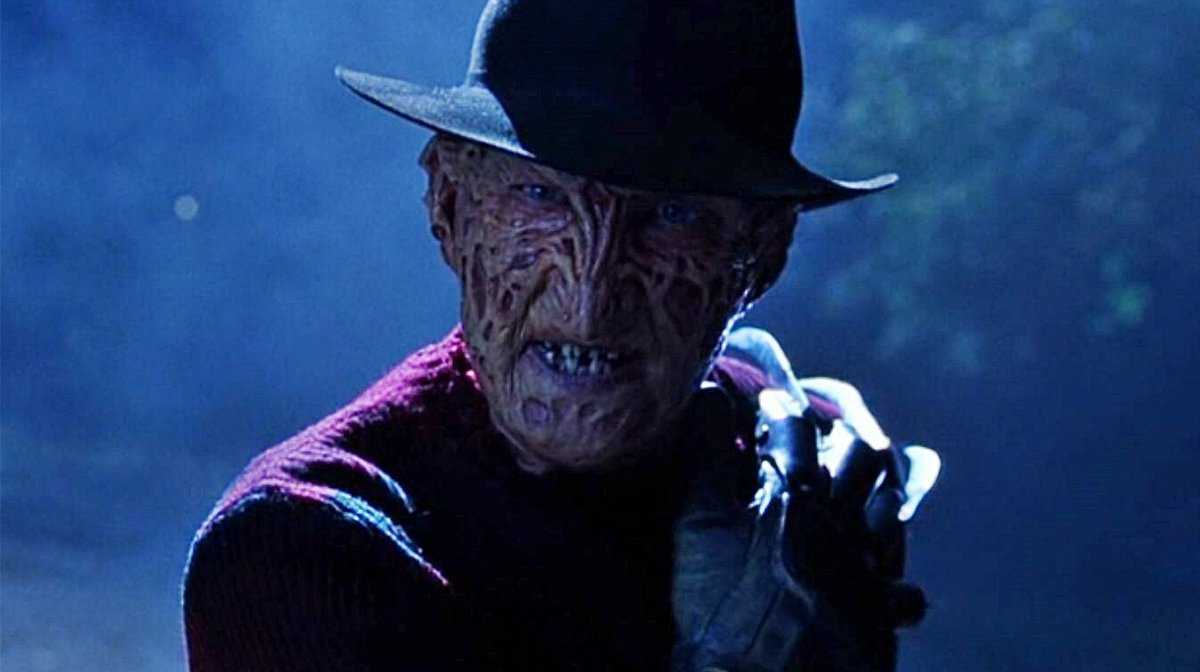 No matter the imperfections or stumbling blocks, A Nightmare On Elm Street is a phenomenal franchise that beautifully marries the examination of trauma with campy slasher fun. These films are constantly walking the line between serious and funny, which makes it all the more enjoyable.

All seven films are bursting with creativity in the form of deliciously disgusting body horror, and are a testament to the skills of horror filmmaking in the 1980’s and 1990’s.

If I could go back in time and make myself watch these movies, I definitely would. I think young horror lover Mary Beth would have learned to love them.

Shop our Nightmare On Elm Street merchandise now, including our exclusive steelbook of the original movie and the box set Mary Beth enjoyed!