From a local pub taking refuge from an unexpected zombie apocalypse, a remote British village tackling a series of grisly attacks, and five friends battling an alien invasion to save humankind, Edgar Wright is a director that needs no explaining.

With each of his movies Wright unleashes a wave of mayhem and chaos, with his gamer-geek comedy Scott Pilgrim vs. The World being the one that took his fanatical and comical style to a new level we still applaud ten years later.

Adapted from Brian O’Malley’s popular graphic novels of the same name, Wright’s take on the series escalates the art of comedy and punk rock through a bold and electrifying lens. 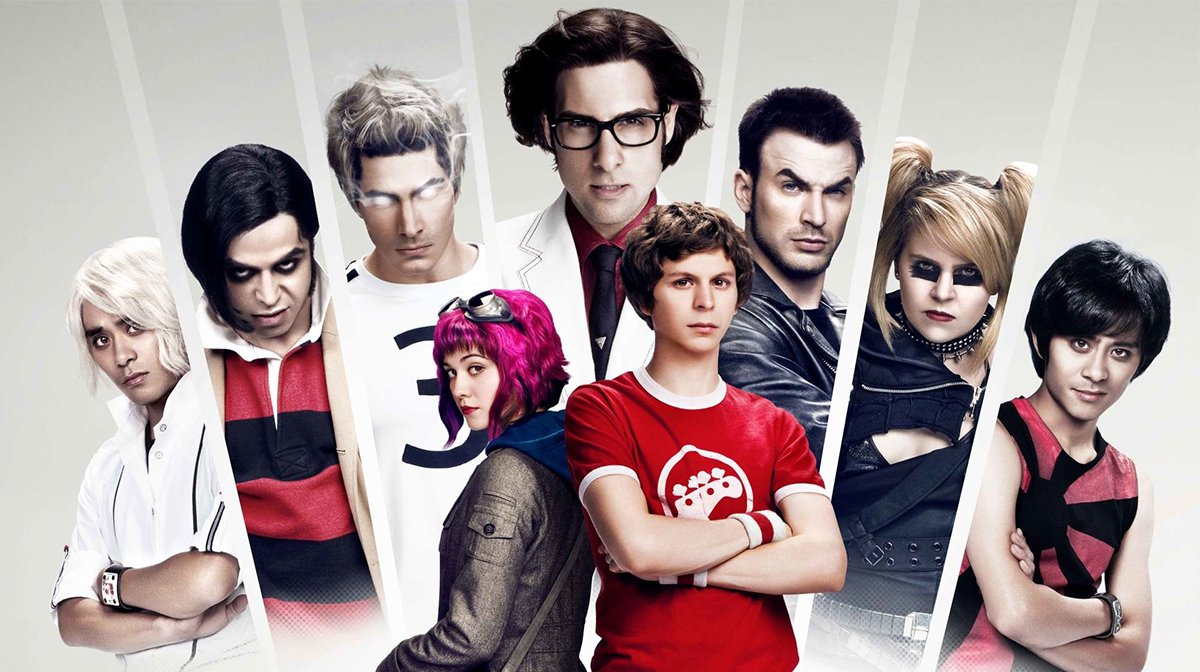 A hilarious hyperactive mix of action, video-games and music built through its meta universe, Scott Pilgrim vs. The World is a film that finds its energetic light through an inventive quest of love and friendship (coupled with a few evil-ex showdowns).

Finding a line between fantasy and realism, it is as exciting as its name ten years on.

Shuffling between flashy combat sequences and catchy musical numbers, Wright’s entertaining 2010 hit is an internal battle that cleverly presents itself through a fantastical world in the eyes of our main character Scott Pilgrim (Michael Cera). 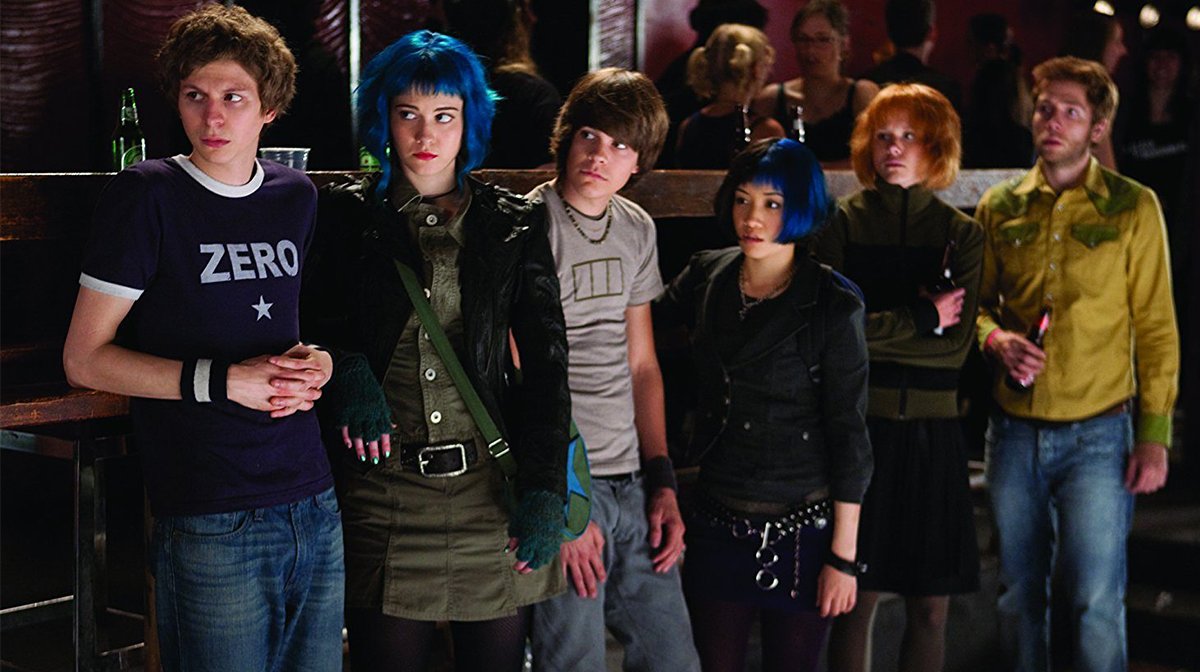 Playing lead bass in band Sex Bob-omb, the 22-year-old slacker is a wishful daydreamer and a character who is very into pop culture.

From the graphic t-shirts and striped wristbands, his references to video-games and perfect rendition of the Final Fantasy II theme, Cera’s endearing character lives his life through media – a fantasy realm of art and music that quickly becomes real when his infatuation with Ramona Flowers (Mary Elizabeth Winstead) enters the picture.

While already enamoured in a relationship with 17-year-old schoolgirl Knives Chau (Ellen Wong) – a love affair that mostly holds up to riding the bus together, talking about yearbook club and playing Ninja Ninja Revolution – Scott decides to play a two-way game that eventually leads him to breaking up with a crushed Knives, and falling head over heels for the new girl on the block. 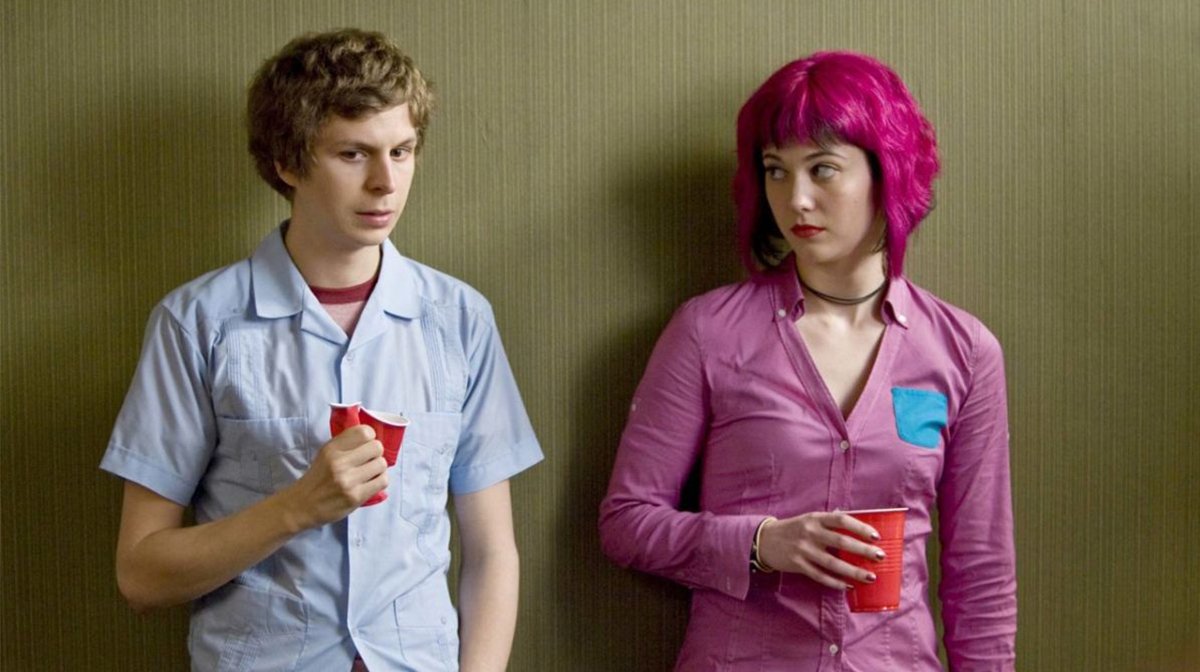 Quickly paving a way into her life through a Puk-Man and Pac-Man comparison, and an eager plea to hang out with her, Wright executes Scott’s feelings for Ramona in a way that resonates his character’s youthfulness and playful behaviour – despite him being in his early twenties.

Using hearts and kiss illustrations to reference Scott’s infatuation, the hyper-punk, comic film steadily starts to exuberate a pace which feels unrelenting when it comes to presenting what falling in love actually feels like.

Erupting the stereotypical ‘guy meets girl’ story into a compelling test for how much Scott truly loves Ramona, and the lengths he will go to keep her in his life, Wright quickly flowers the film into something extraordinary, and unravels the world of dating in a much more bizarre and imaginative lens. 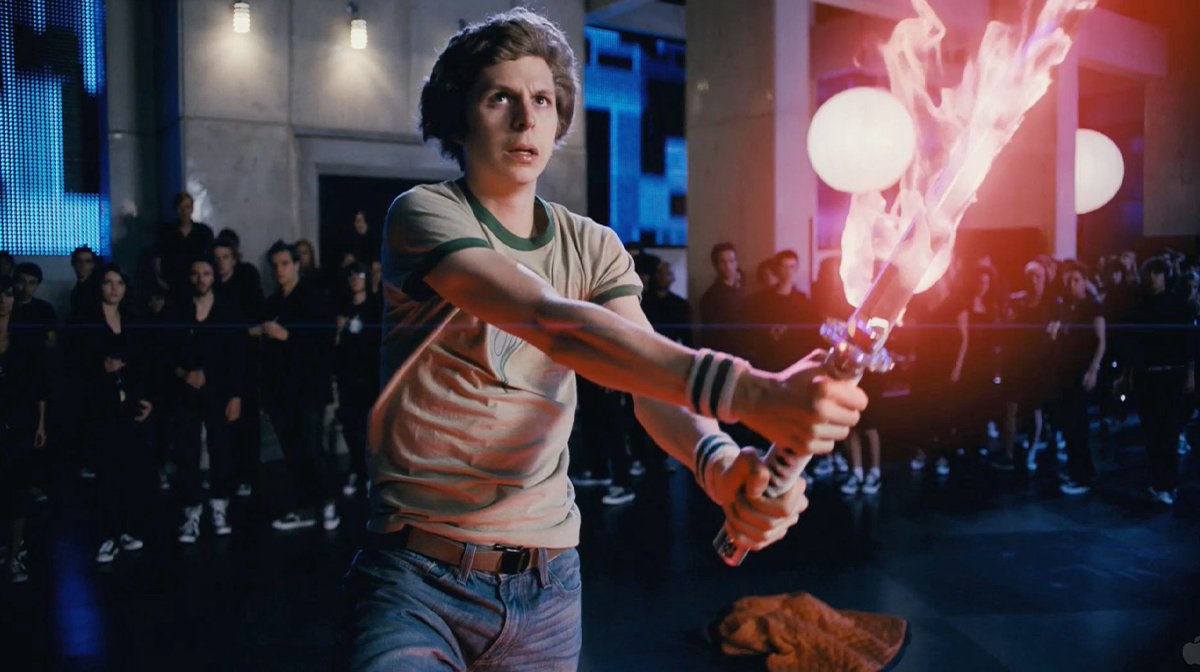 Constructed with a cartoonish vibe, an abundance of sound effects and visuals are perfectly timed with each ‘K-0’ and animated images, with Scott Pilgrim vs. The World finding its electrified spirit through its wild originality and dizzyingly bold creativity.

Building more on the pop-art feel throughout, the film ignites like never before when it has a break out of action.

With loud, flashy comic references spread across each elaborate fight – the quickness of transitions and cuts giving it a perfect touch – Scott Pilgrim vs. The World puts greatness in graphic novel adaptations. 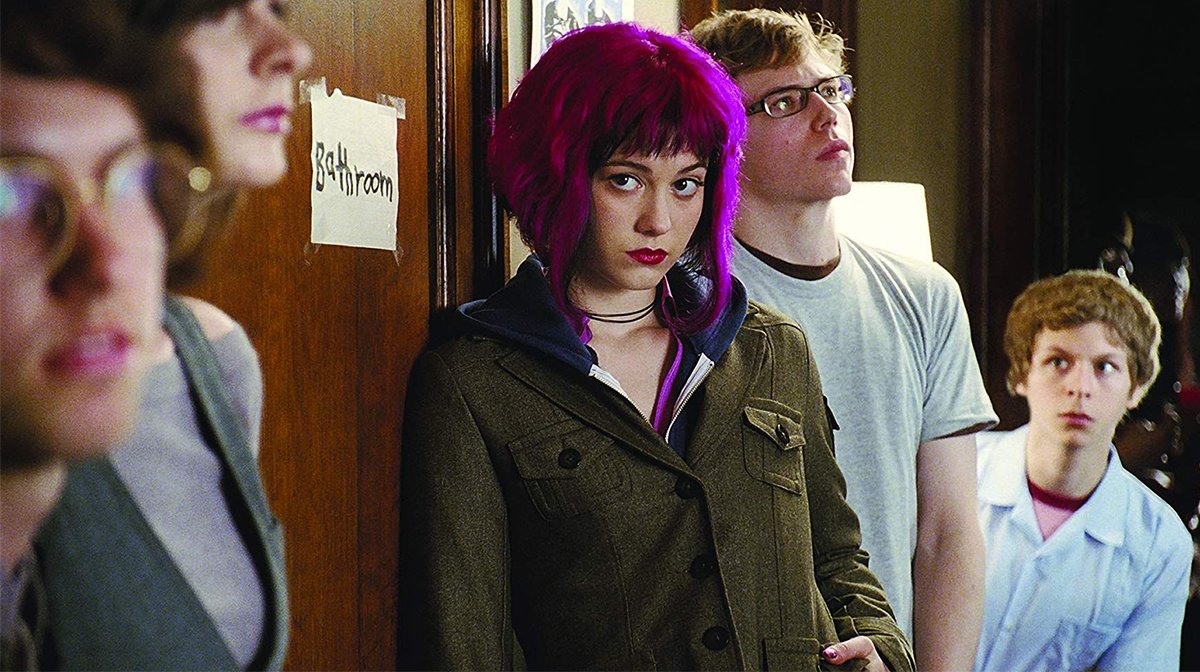 With infatuation leading the extreme tale into a milestone for the comic book universe, Scott Pilgrim vs. The World levels the hilarious story even higher with the “perfect asshole” that started the league of evil exes – Gideon Gordon Graves (aka, “G-man”).

Fighting the chewing-gum obsessed, rich manipulator (Jason Schwartzman), the film slowly starts to fade away from the revenge regime and starts to focus more clearly on its hidden message – self-respect and honesty. 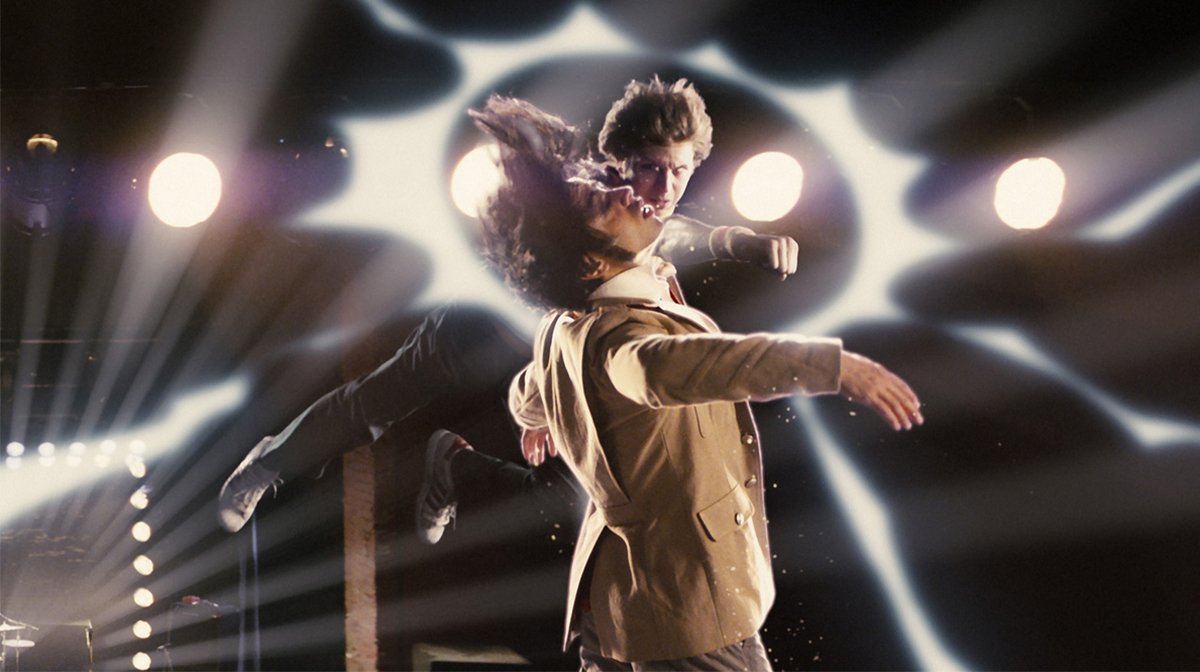 From this, the live-action film starts to explore who Scott has been neglecting: Knives.

Standing out amongst the other characters by her visible age difference, Knives is evidently distinct when it comes to expressing her most inhibited feelings for the first time; an act that is neither tainted or broken.

Playing a role that remains kind and naive, despite being bound with sadness and spite during the middle, Wong strengthens her character throughout by shattering the stereotypical dumpees’ image by withstanding a badass persona who was ultimately “too cool” for Scott anyways. 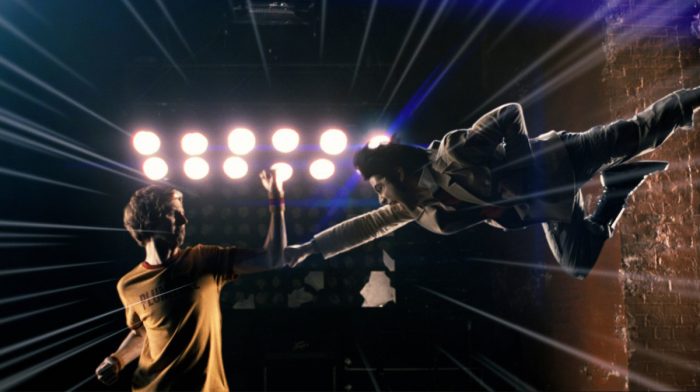 Rehashing with his “she who will not be named” ex-girlfriend Envy Adams (Brie Larson), hatching a better friendship with past lover Kim Pine (Alison Pill), praising lead singer Stephen Stills (Mark Webber) for his talent in their garage band, and hailing “Young Neil” (Johnny Simmons) as just Neil, the hyper-punk, Scott Pilgrim quickly starts to find meaning beneath its heightened action sequences and media references by its weighty, heartfelt and important connotations of life and being true to oneself.

Paired with a narration of our main character’s inner thoughts, an element that escalates upon the film’s insane caricature, a chaotic burst of coins and an incomparable sense of humour (some of the greatest lines coming from Scott’s “gossipy bitch” roommate Wallace Wells (Kieran Culkin)), Scott Pilgrim vs. The World is a graphic novel adaptation that continues to inhale the same entertaining thrills ten years on.

A passionate and iconic film that will forever make you want to click continue when it ends.