Maya Lopez (known by her superhero name ‘Echo’) has been officially confirmed to appear in the Hawkeye Disney+ TV series, as recently reported by Variety.

While we don’t know the specifics of Cox’s role, we do know that Echo will be joined by her father, William Lopez (played by Zahn McClarnon) — who appears to be the Marvel Cinematic Universe (MCU) adaptation of his comic-book counterpart: Willie ‘Crazy Horse’ Lincoln. 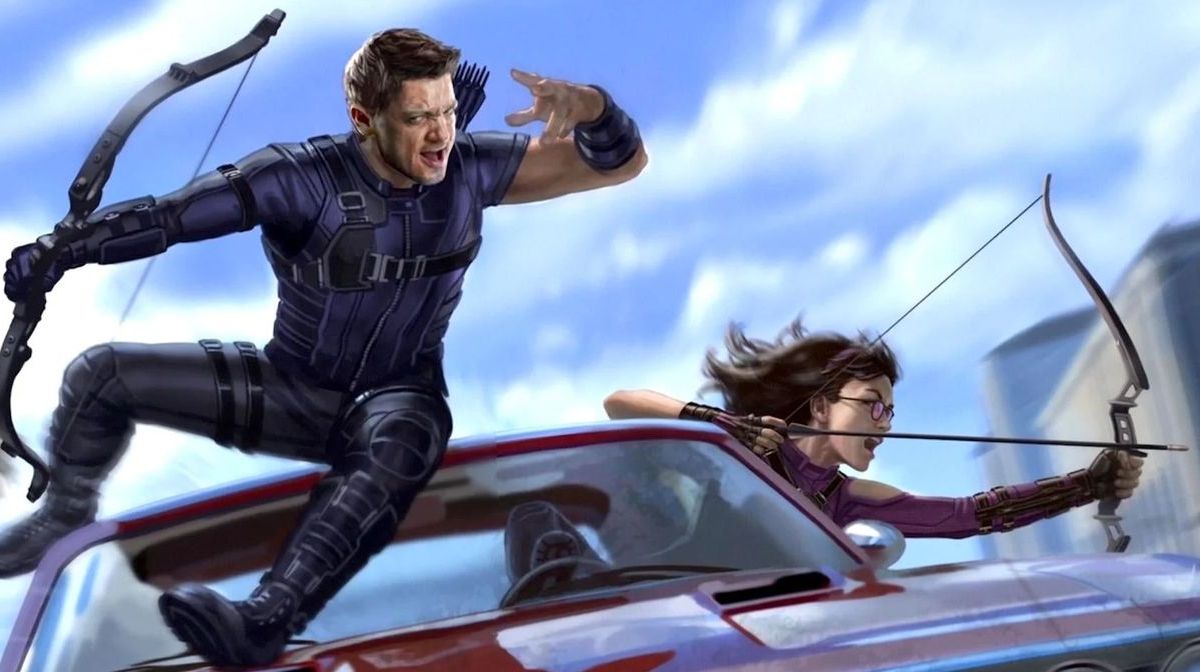 This is a big leap forward for the continued representation of characters from diverse backgrounds, with the street-level hero being both deaf and of Native American heritage.

The addition of Maya Lopez provides many opportunities for the MCU moving forward, so join us as we take a look at the character’s sprawling comic book history. 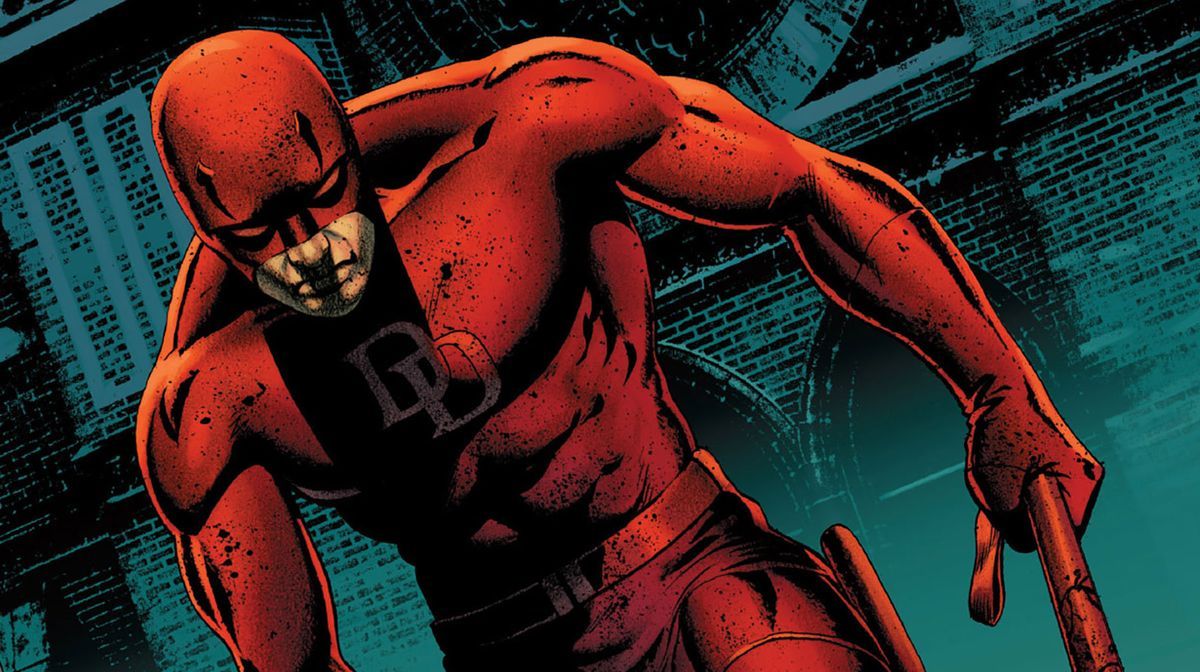 Maya Lopez is most commonly associated with Hell’s Kitchen crime-fighter Daredevil, having been first introduced in Joe Quesada and David Mack’s Daredevil (Vol.2) #9 in the late ‘90s.

When she was a child, Maya’s father was murdered by Wilson Fisk (the ‘Kingpin’), who was then urged to take care of the orphaned girl — to which Fisk agreed.

Born without hearing, Fisk sent Maya to a boarding school for children with special needs. There she discovered her unique ability to replicate any action she observed (dubbed ‘photographic reflexes’). This allowed her to become proficient with the piano, among many other impressive skills. 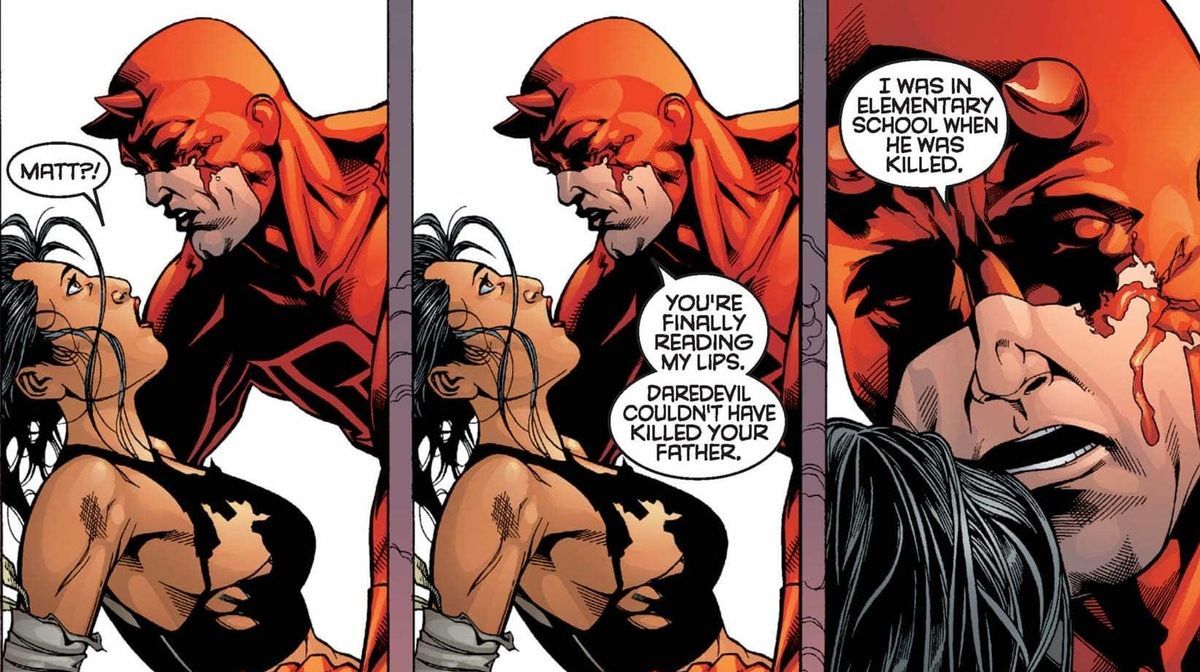 Years later, when Maya had grown-up, Fisk manipulated his vengeful prodigy into attacking the vigilante Daredevil under the guise that he was the one responsible for her father’s death.

This inspired Maya to develop her costumed alter-ego, Echo — reflecting her natural aptitude for copying. Under this identity, she painted her face with a distinctive white handprint, a call-back to her father’s demise, during which he pressed his bloody palm against her face.

Thanks to a meeting orchestrated by Fisk, the unassuming lawyer Matthew Murdock (Daredevil’s civilian identity) and Maya became romantically involved. 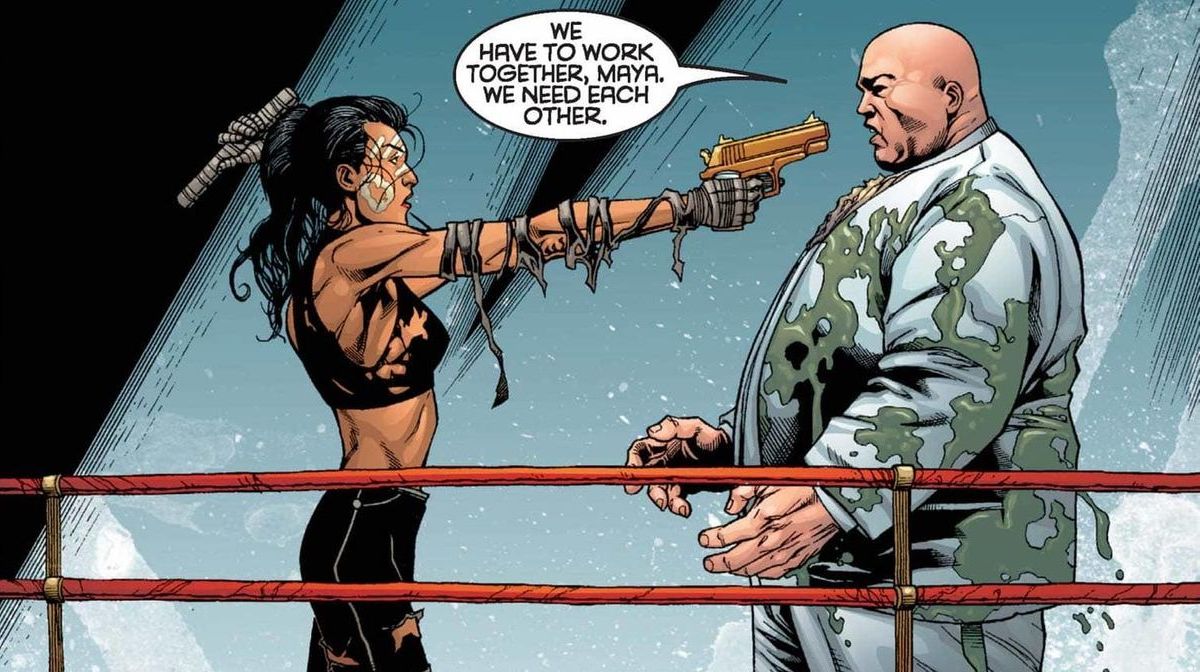 After finding out that the Devil Of Hell’s Kitchen and Murdock were the same person, Maya deduced that Fisk was ultimately responsible for her father’s death, subsequently blinding him in an act of revenge.

She then ventured out into the wider world on a journey of self-discovery, having been betrayed by the person she trusted the most.

So Will We See Daredevil In The MCU? 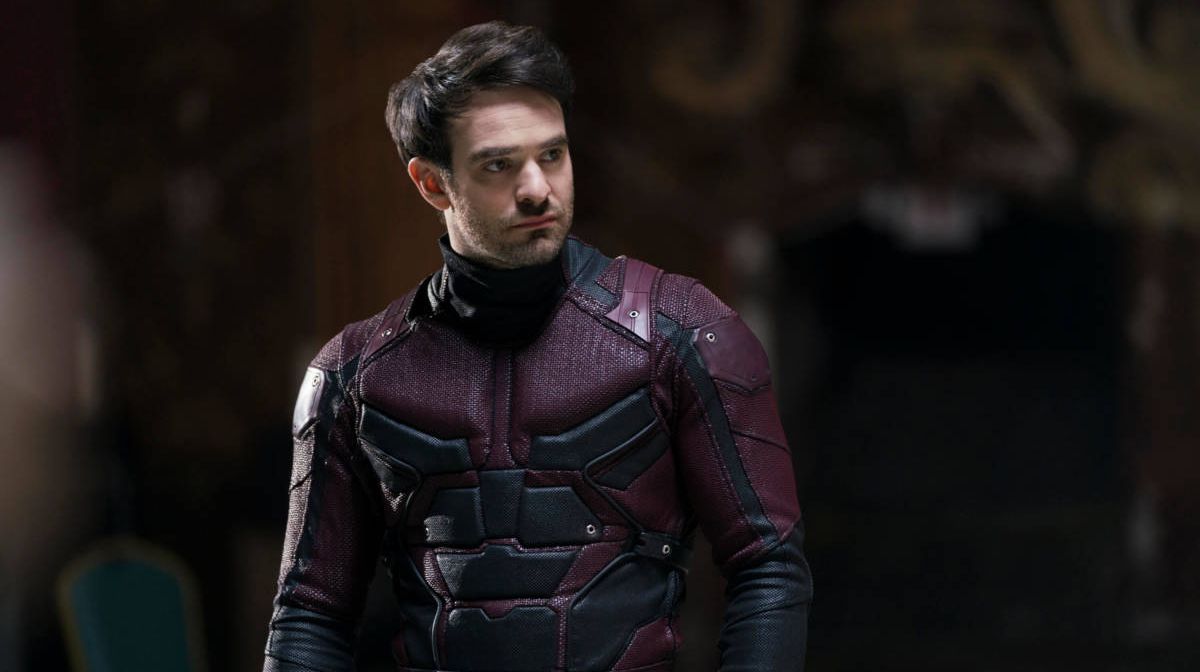 Echo’s live-action introduction not only increases the tally of badass superheroes in the MCU, but this also provides a potential bridge for Daredevil to cross.

Actor Charlie Cox has been repeatedly rumoured to return to the role for some time, having played Matthew Murdock for three seasons on Netflix before the Daredevil show was cancelled in 2018. Maya’s sudden inclusion may serve to add validity to those claims.

There is strong connective tissue being built between the MCU and the Daredevil corner of New York, and it would be an easy win for Kevin Feige (the president of Marvel Studios) to bring the beloved Netflix cast into the mainstream continuity.

How Is Maya Lopez Connected To Hawkeye? 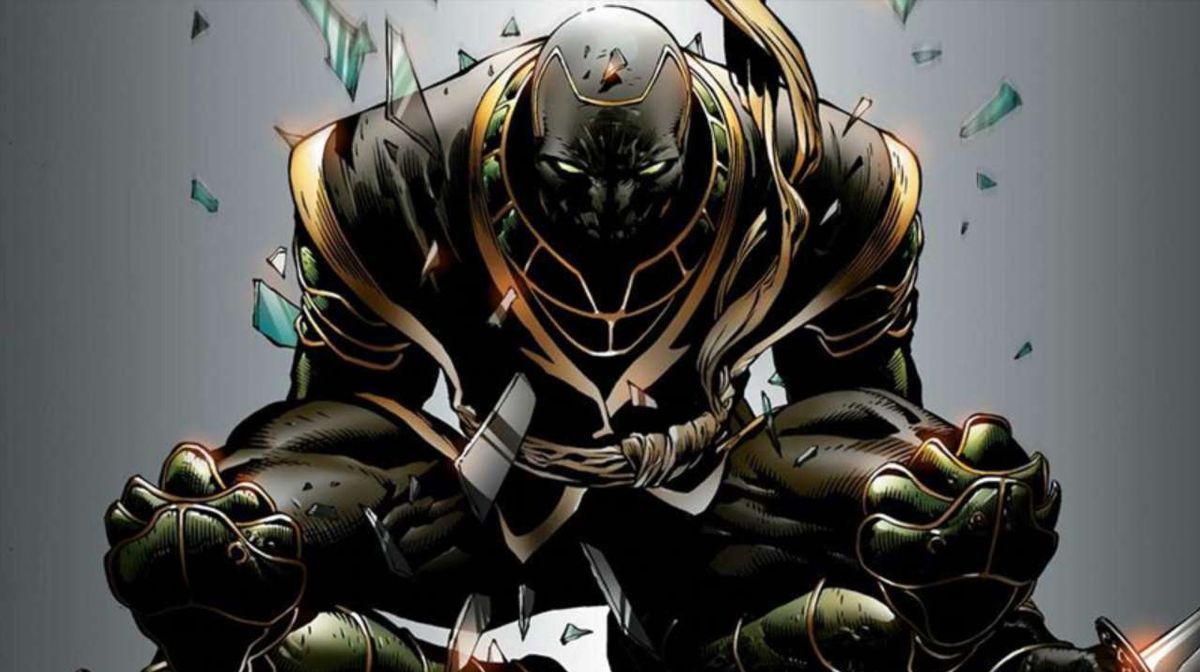 Following her antagonistic run-in with Daredevil, Maya Lopez was next seen in writer Brian Michael Bendis’ New Avengers #11 (2005). In this series, she adopted a new identity: Ronin.

This persona was later used in the comics by Clint Barton, which we saw translated to live-action in 2019’s Avengers: Endgame, following the ‘dusting’ of Clint’s entire family by Thanos.

However, after Natasha Romanoff (Black Widow) informed him that all was not lost, Clint gave up the sword and began wielding his trusty bow and arrows again. 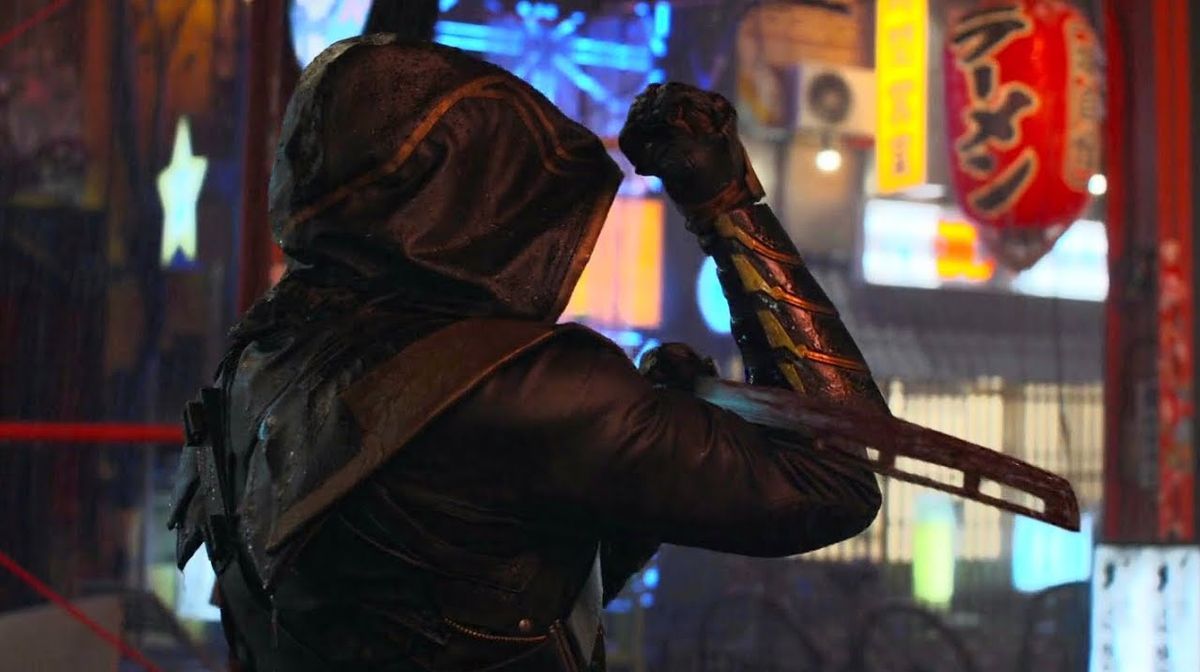 Based on this significant connection, it is possible that the two Hawkeyes (Barton and Bishop) will encounter Maya wearing his old ninja get-up. After all, nothing is going to attract Clint’s attention more than a reminder of his dark past.

Alternatively, we still don’t know what Clint’s inspiration was for donning the costume in the films to begin with. We only caught a small glimpse of his exploits as Ronin right at the end of his tenure.

This being said, it could be possible that in this universe it was Maya who was the original Ronin — just like in the comics. 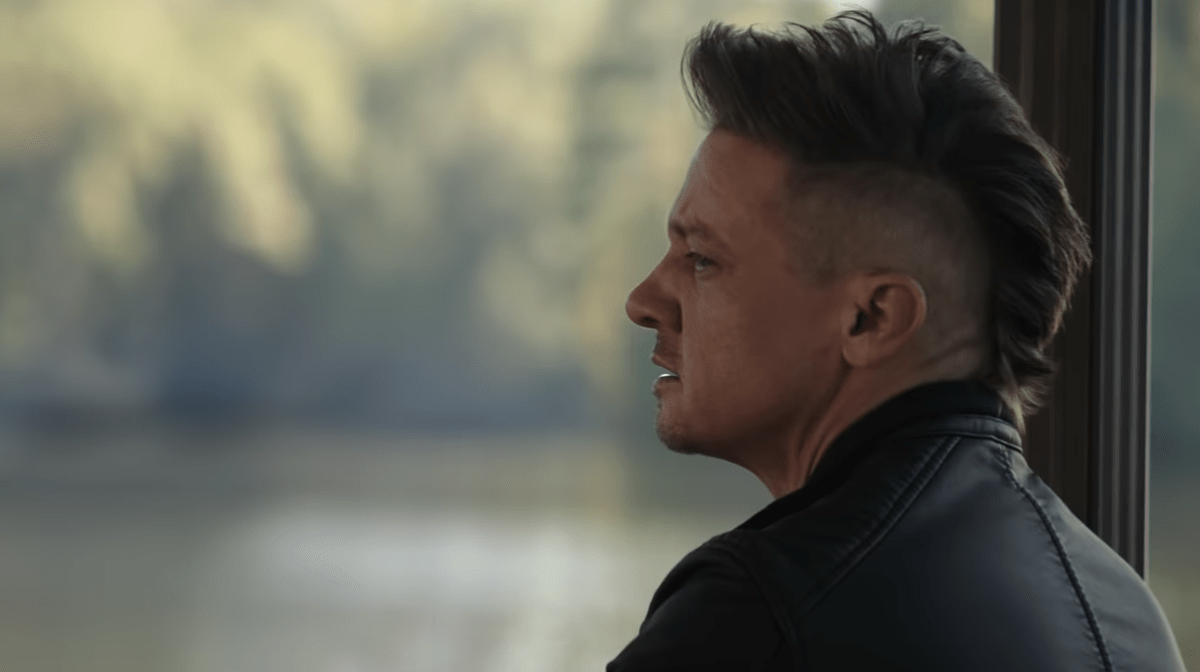 In the comics, following the events with Fisk and Daredevil, Maya spent a lot of time in Japan. Coincidently, this is exactly where we found Clint hunting down the Yakuza at the start of Endgame.

But it was also mentioned that he was tracking cartel members in Mexico prior to this, so there is nothing to prove that he met Echo (as Ronin) in Japan — if at all. 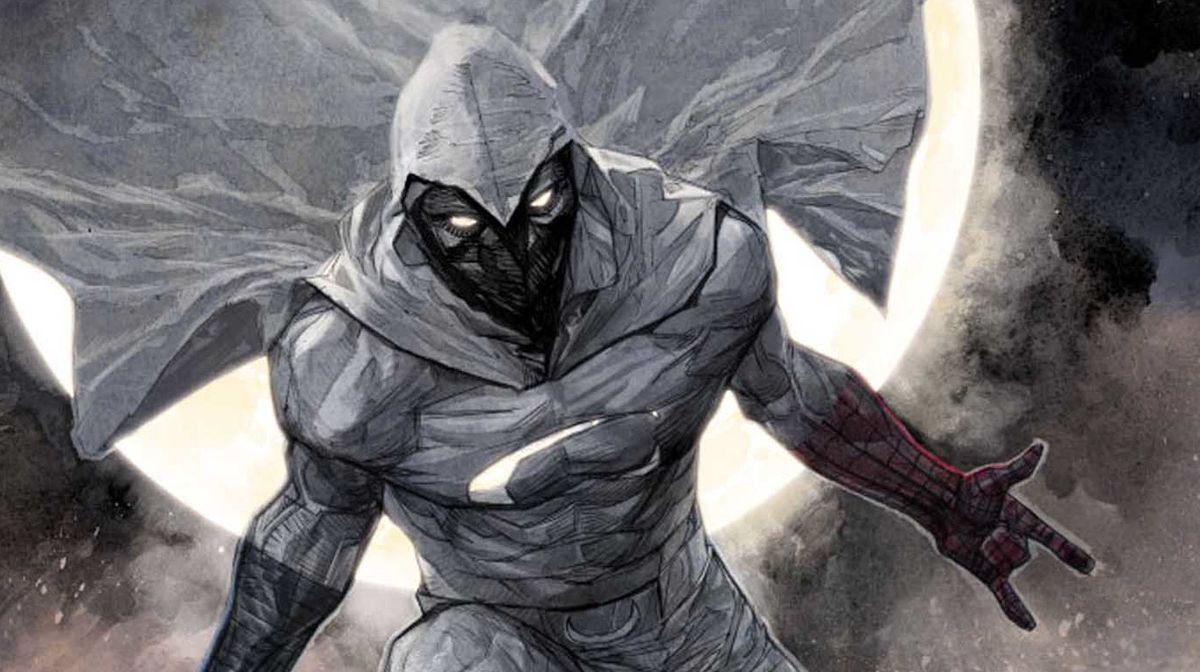 If you’ve been closely following the ever-expanding slate of MCU television series in development, you will no doubt be aware that a Moon Knight show is approaching.

This begs the question of whether Maya Lopez will have a prominent role alongside the title hero, Marc Spector. The two have an established relationship on the pages of the comics, with Echo appearing in Bendis’ run on Moon Knight in 2011.

Unfortunately, this didn’t end well for Maya, dying at the hands of the villainous Count Nefaria. But hey, nobody truly stays dead in comics. And maybe she’ll get lucky this time…

When Is Hawkeye Set To Debut? 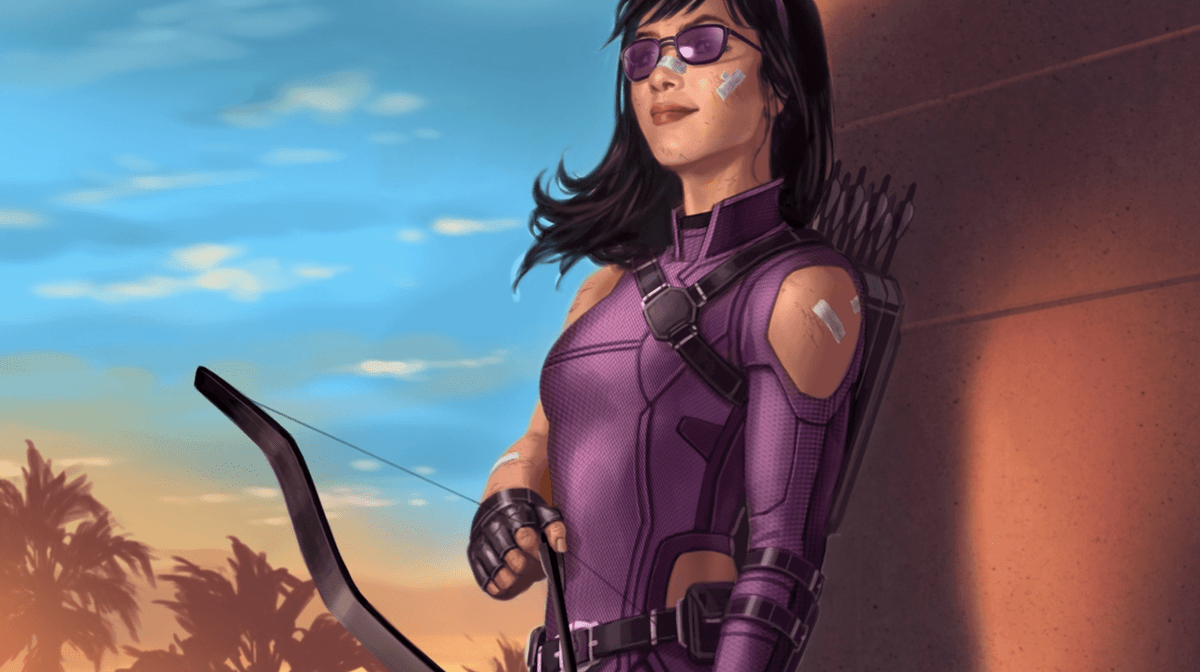 Hawkeye is currently filming and set to debut in late 2021 on the Disney+ streaming service.

However, as with many shows in development at the moment, this is subject to change due to industry setbacks thanks to the pandemic.

For more from Earth’s Mightiest Heroes, check out our complete range of Marvel merchandise.