Paul Feig’s female reboot of Ghostbusters is currently perched at the top of the UK box office; but if our predictions are correct, it’s sure to be blasted off top spot come the weekend when the highly anticipated Star Trek Beyond enters our cinematic territories. Since 2009, the Star Trek reboots have not only attracted ‘trekkies’ to the big screen, but newer, wider fan bases alike thanks to the current Star Wars director J. J. Abrams. Despite Star Trek Beyond not being directed by the Brooklyn born filmmaker this time round, he’s still at the helm of the franchise serving as Executive Producer.

Fast and Furious mastermind  Justin Lin takes on the latest film, and it’s fair to say he’s done a sterling job with the franchise – adding a fast paced, explosive element to the movies not seen previous pictures. If that’s not a good enough reason to see the new film this weekend, we’ve got another five reasons why you should. Check out Zavvi’s top five reasons why you should go and see Star Trek Beyond this weekend…

1) The Critics’ Reviews Have Been Glowing 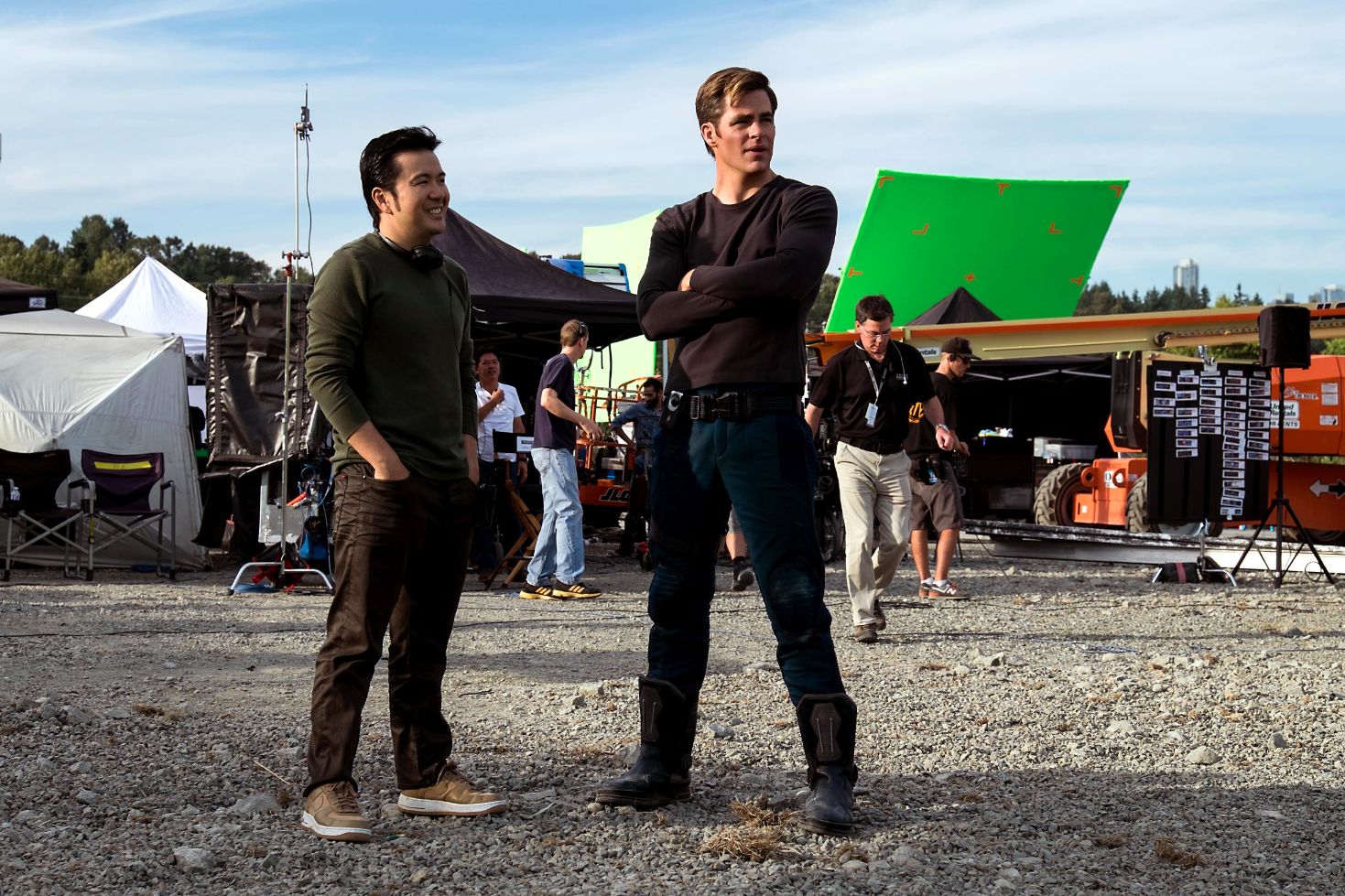 The film is already certificated fresh on movie review site Rotten Tomatoes, bringing home an impressive 93% approval rating. Critics have been positively favourable across all boards with the majority of press sharing three reoccurring themes amongst their write-ups. Firstly, it’s universally agreed that the ‘fun factor’ has been brought back to Star Trek. Humour, action and Sci-Fi can work hand in hand; this was evident in the latest Star Wars release The Force Awakens. This new approach was undoubtedly due to comic Simon Pegg’s screenplay – which we’ll discuss later in the article.

Secondly, acting from the entire cast is sublime. Director Lin’s claimed that he’d been one the ‘luckiest directors in Hollywood’ inheriting ‘the perfect all-star cast’.

Finally, all reviews agree it pays respect to the original Star Trek series, nostalgically reviving iconic characters within new story-lines in a modern yet respectful way.

Lin, a mastermind of car chases, brings his imaginative sense of spectacle to space, and the result is something truly sensational, and befitting a summer blockbuster.

2) It’s Been Written By Simon Pegg (And Doug Jung) 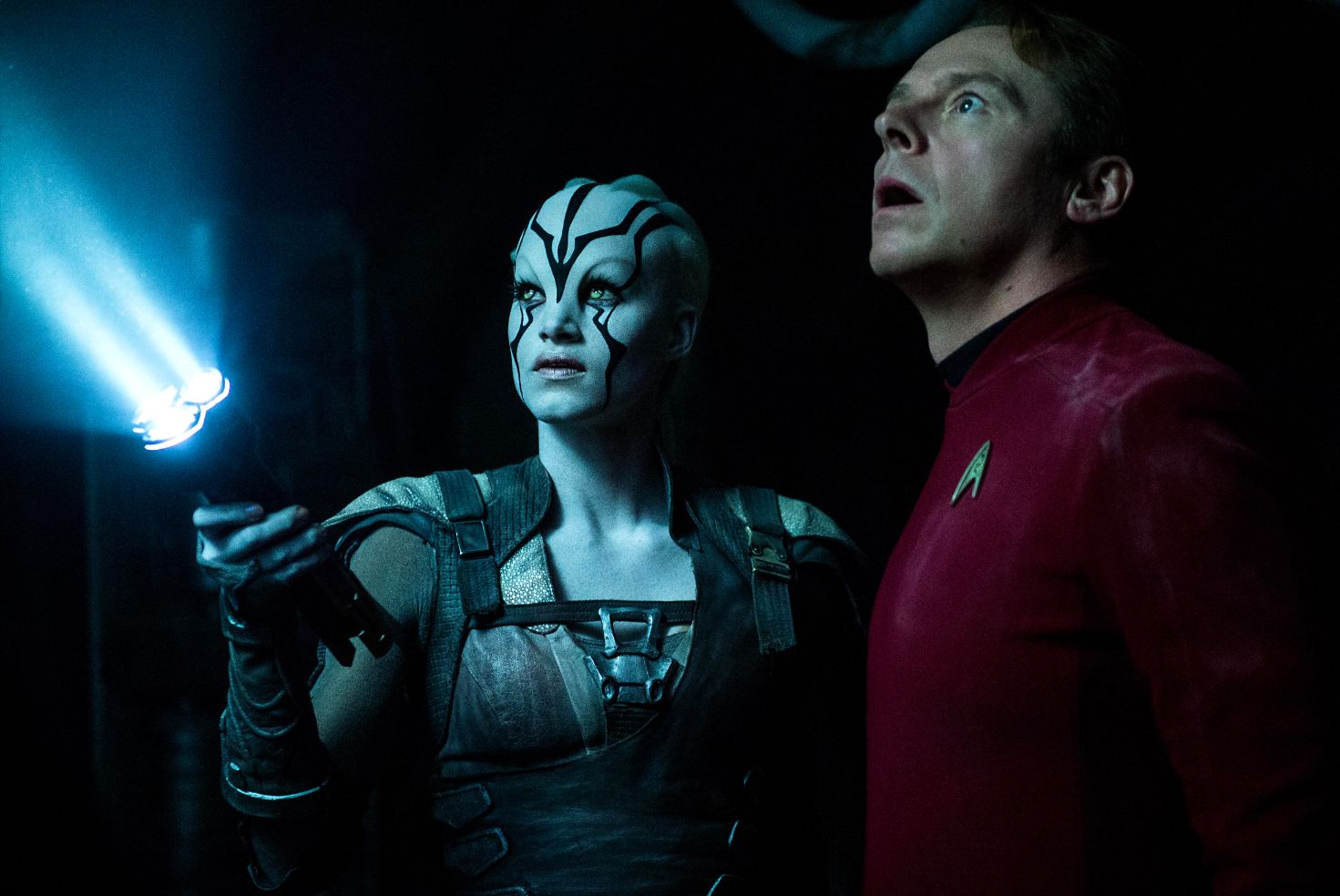 Simon Pegg is living the dream. A die heat Star Trek fan; Christmas came early when he was cast in the original 2009 remake… little did he know he’d have the chance to write the screenplay for a sequel just a few years later.

Despite writing a highly captivating script, he wasn’t the original choice. Star Trek Beyond was originally planned to be written and directed by Roberto Orci however, the  Paramount Pictures creative team had a change in heart. Opting for a last minute change, they ditched the writer/directors approach for fear it could just be a little ‘too Star Trek’. On the studios orders, Pegg was commissioned to write something ‘more inclusive’ offering appeal to a wider audience. Pegg said that ‘to fix the earlier screenplay, we had to make a western or a thriller or a heist movie, then populate that with Star Trek characters so it’s more inclusive to an audience that might be a little bit reticent’.

Pegg’s script has ticked all the boxes, courteous yet progressive, his creative vision is sure to bring Star Trek to a larger appeal like the studio so wished. A text that’s gripping, refreshing and characteristically witty – we’re sure it won’t be long until the self-confessed geek is re-hired to write the next release. We wouldn’t want it any other way. 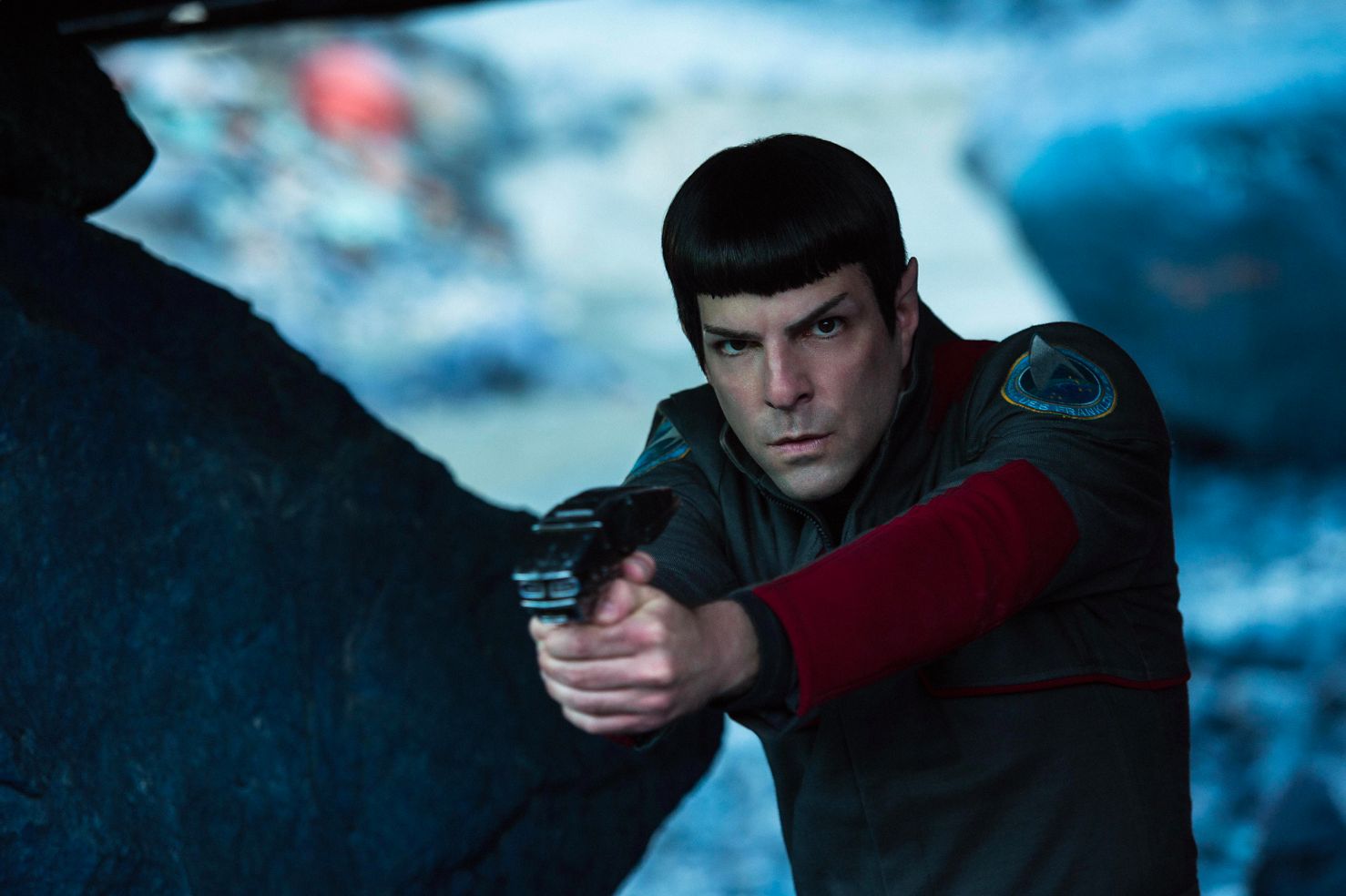 It’s crazy to think that the first episode of Star Trek was broadcast just a few months after England won the 1966 world cup; beginning the five-year mission, exploring the strange new worlds, seeking out the new life and – of course – boldly go where no man has gone before.

Despite becoming a much loved series, the original TV show was cancelled after just three seasons – two years short of the initial five year mission. Since the original cancellation, Star Trek has been reborn into another six TV series, 12 original movies and countless releases of books, comics and merchandise ranges. 1972 saw the first Star Trek fan convention, which in-turn kick-started a life-long obsession for fans, many ‘trekkies’ traveling the world interacting with the global Star Trek community. Star Trek isn’t just a franchise; it holds a place in people’s heart and has done for 50 years.

Traditional sc-fi franchises are typically built upon war, good and evil and the so-called dystopian future. Original Star Trek creator Gene Roddenberry encouraged  an ethos of differing worlds coming together, living in peace within a singular universe. The original  TV productions famously practiced this behind the camera, casting diverse range of actors with various backgrounds, heritages and sexualities. This liberal ethos was previously unseen in American television. Roddenberry’s evident thirst for global peace, and harmony, has ensured the series remains a legendary one.

Last month, Anton Yelchin (the actor portraying Pavel Chekov in Star Trek Beyond) sadly died in a freak car accident at his LA home. He was aged just 27. A true rising star, Yelchin’s performances in the previous two Star Trek films left audiences, fans and critics awestruck as he brought a new, fresh and charismatic approach to the Pavel Chekov character.

From countless independent films to multiple US TV series, Anton Yelchin was known as a hard worker, often rehearsing until the early hours of the morning after each day of shooting. He will forever remain the perfect Chekov and live-on as one the best legacies left by the latest Star Trek trilogy. Watching Star Trek Beyond will for sure be bittersweet for many fans for this saddening  reason, yet his performance should be celebrated and commended for the perfect portrayal it truly is yet. Attempting to remain upbeat, we still can’t help but think what a bright future this young actor would have actor had in the years to come… 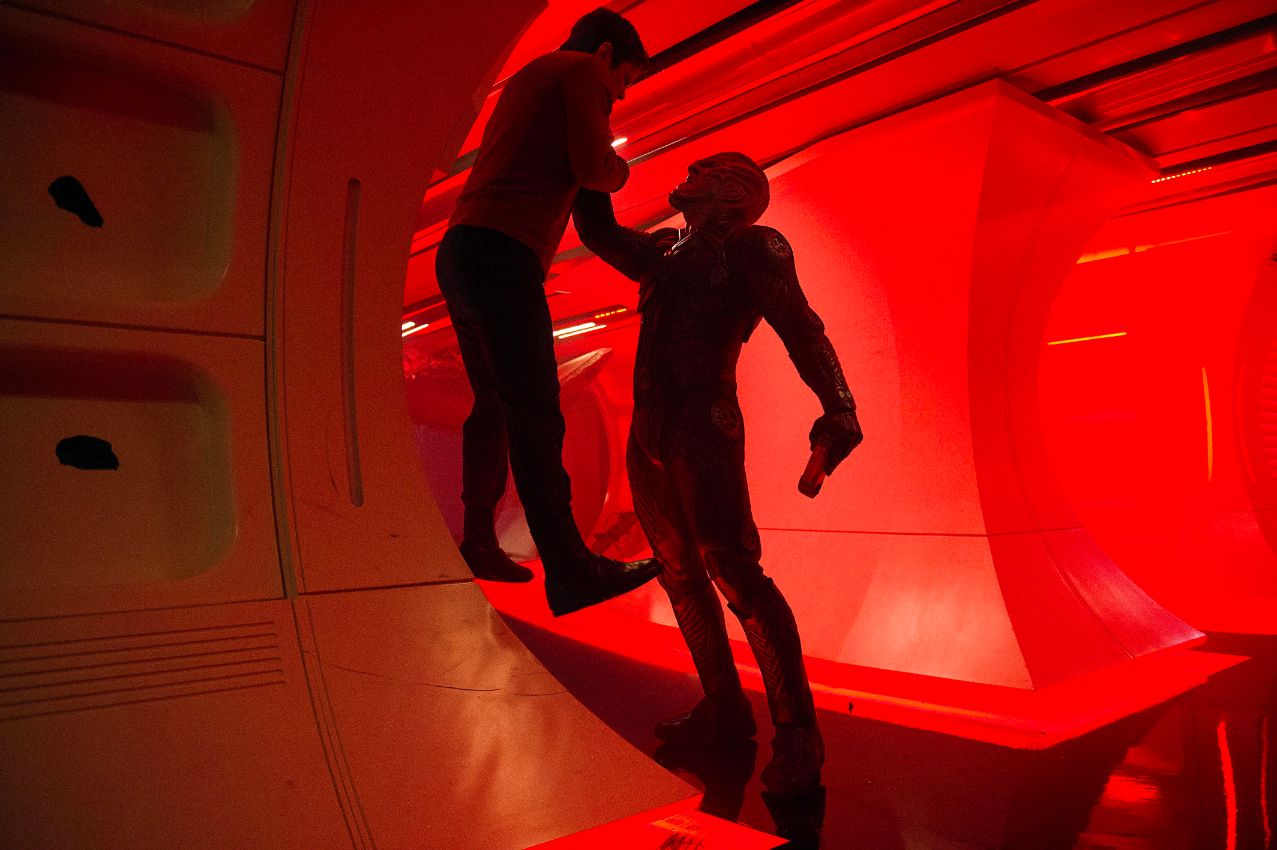 It’s Star Treks first return to TV since 2005. With filming set to begin in Toronto in September, we can’t contain our excitement for the latest TV re-boot. Not only will this new series be available to stream in 177 countries globally;  to celebrate the new re-make Netflix will also make every past episode of Star Trek available to stream.  Alex Kurtzman, co-writer and producer of the 2009 Star Trek (and the 2013 sequel Into Darkness) will serve as executive producer on the series.

Check back on the Zavvi Blog for the latest news on these developments as no casting or plot announcements have been made as yet. We’re being left very much in the dark on this one…

Star Trek Beyond is released on the 22nd July in the UK. The film will be avilialbe to view in 2D, RealD3D, and IMAX 3D. You can book your tickets here.